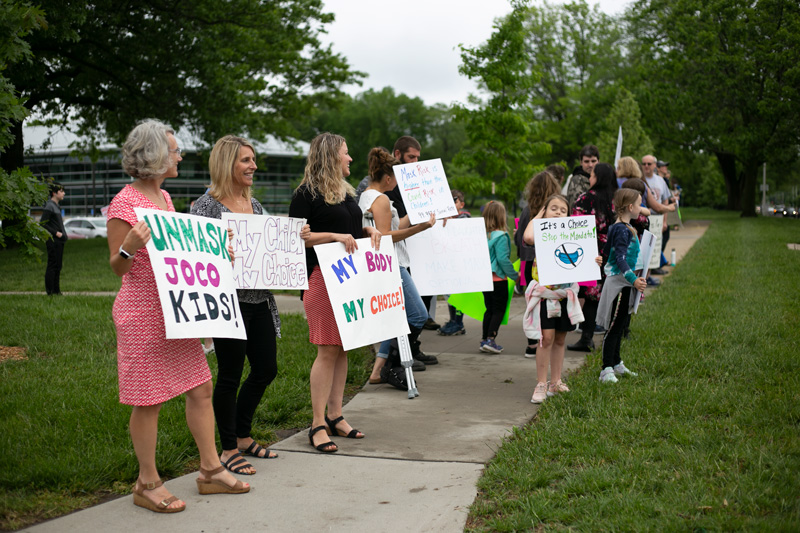 A group of about 30 people opposed to the Shawnee Mission School District's ongoing rule requiring masks be worn at school gathered outside the Center for Academic Achievement Monday, encouraging the board to roll back the mask policy just more than a week before the end of the school year. Photo credit Leah Wankum.

A group of more than 30 people — including Kansas state Senators Kellie Warren and Mike Thompson — gathered at the Shawnee Mission Center for Academic Achievement Monday to press the district once again to consider ending its requirement that masks be worn inside its buildings.

Organized by Shawnee resident Debbie Detmer — who previously sued the city of Shawnee over its mask requirement — Monday’s demonstration came less than two weeks after SMSD denied two requests for public hearings that aimed to challenge the mask rule.

On Monday, Warren, a first-term senator from Overland Park, thanked the demonstrators for attending.

“[SB 40’s] legislative intent was to have parents, students, employees and businesses have a voice and to be heard and due process by their governing bodies – and people are feeling frustrated that that’s not happening,” Warren said.

Brian Neilson, a Leawood resident who recently filed to run for SMSD Board of Education against current board president Heather Ousley, was also there Monday.

He said he’s “not anti-mask” and added, “It’s time to follow the facts.”

Instead of requiring masks in all buildings, Neilson said he’d support the district lifting its mask mandate and allowing people to choose whether or not they want to wear a mask.

Neilson, who also said he sent the board of education a letter a few weeks ago asking the district to allow kids to take off their masks during outdoor recess, added that if the general public can go without masks, it’s time to ask “why are we keeping kids in masks?”

“At minimum — because we’re two weeks from summer break — just go without [masks] at recess until summer break, then we can come back in August,” Neilson said.

KCTV 5 reported that a smaller group of demonstrators rallied nearby in support of the district continuing to require masks.

But the agency also said because the vast majority of children are not yet vaccinated, schools should continue with policies like masking and physical distancing.

SMSD sent a message to families last week saying the district’s mask requirement would remain in place through the end of this school year, which is Thursday, May 27.

“We will continue to follow those guidelines,” he said. “We hope for that day — and it will come — when those mitigation measures give way to what we know to be normalcy. In the meantime, we will continue to follow the CDC’s guidance, the guidance from the Kansas Department of Health and Environment and the guidance from the Johnson County [department of health].”

Fulton held out hope that restrictions would be lessened by the time students return for school in August.

“As vaccinations grow across all age groups, so will mitigation practices start to go away, especially going into next school year,” he said.

Public school districts in Johnson County have faced criticism regarding their COVID-19 policies since last summer, even before they began returning some students to in-person learning.

But conflicts in recent weeks have centered on schools’ mask rules.

Earlier this month, SMSD denied two requests from parents for public hearings aimed at challenging the district’s policy that masks be worn inside its buildings.

But SMSD denied the requests for hearings on masks because the complaints dealt with the district’s mask policy, which has been in place since last summer, months before the new law took effect.

The Blue Valley, Olathe and USD 232 De Soto districts have all hosted multiple public hearings in recent weeks to allow for parents to air their complaints about masking rules, but all three districts have ultimately decided to keep their mask requirements in place through the end of the school year.

In general, parents challenging districts’ mask rules echoed some of the arguments made Monday — that masking is harming children’s physical and mental health and impeding their academic performance.

In addition to arguing that the complaints are not timely, school districts have argued that their mask requirements are the “least restrictive” method for allowing students to still attend school in person during the pandemic.

With most students still not fully vaccinated, districts say, masking rules must remain in place to tamp down spread of the disease as much as possible.

Last week, the Blue Valley Board of Education’s regular meeting was shifted from an in-person meeting to a virtual one due to “safety concerns” prompted by “communication we have seen or received that was threatening in nature,” a district spokesperson said.

Dozens of parents showed up at Blue Valley’s central office last Monday night as the meeting was being held virtually to protest mask rules.

That protest came as eight parents sue Blue Valley and Olathe Schools in federal court over their mask rules.