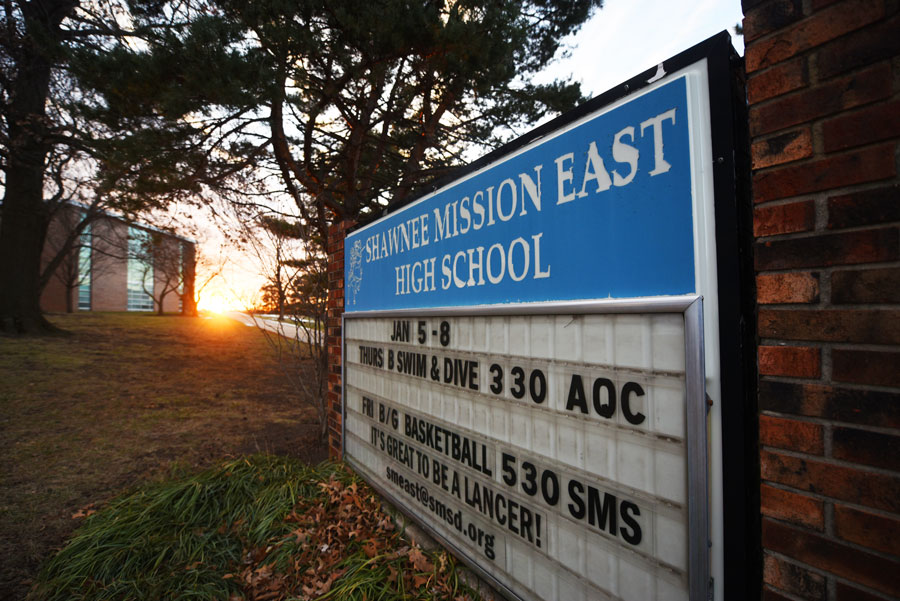 Roughly 200 students walked out of SM East on Friday, rallying in support of Assistant Principal Susan Leonard, who was not named the school's head principal following a recent job search for a new school leader. File photo.

Roughly 200 Shawnee Mission East students walked out of the school Friday afternoon in a show of support for Assistant Principal Susan Leonard, who was recently passed over for the school’s top job.

Organized by freshmen Liv Madden and Maggie Leonard — Susan’s daughter — the students gathered near the school’s track and field area for about 15 minutes around 2 p.m. Friday.

Maggie Leonard said she and Madden organized the walkout as a way to have their voices heard and to underline their opinion that the district “keeps making the same mistakes over and over again” when it comes to hiring for top positions.

Junior Lillian Williams, who also attended the walkout, said the SM East community thought “this year would be [Susan’s] year” with current principal Scott Sherman’s promotion to the district’s director of secondary services announced in April.

Instead, the district hired Jason Peres to be SM East’s next principal. Peres is currently an assistant principal at Blue Valley Southwest High School.

It’s the second time in three years that Leonard — SM East’s top assistant administrator — has not gotten the school’s top job in favor of a candidate from another school.

In 2018, Sherman, who at the time was principal of Indian Hills Middle School, was tapped to replace John McKinney, now the district’s director of family and student services.

Williams said she hopes the walkout demonstrates to Leonard how much they appreciate her and that her hard work — such as late nights spent helping students with projects — hasn’t gone unnoticed.

“We all were really rooting for her. We all wrote letters to the district. We tried our best,” Williams said.

David Smith, Shawnee Mission’s chief communications officer, said the SM East principal hiring process took about a month and was open to applicants inside and outside of the district. The hiring process included two interviews as well as a written application and a performance component, he said.

“SM East has a long history of excellence, and we put together a comprehensive and inclusive process, designed to select the best candidate to continue that excellence, which we believe we have done,” Smith said in an email to the Shawnee Mission Post.

Out of all of Shawnee Mission’s five high schools, there is one female principal, Smith said. The Post has reached out to Leonard for comment but did not immediately hear back.

The SMSD Board of Education formally approved the appointment of Jason Peres — who Smith said was the top candidate out of the hiring process — to replace Sherman at its regular meeting on April 26.

That move came as part of the board’s HR agenda and was approved unanimously.

Peres has worked in the Blue Valley district since 2002, as a teacher, department chair and administrator, the last six as an assistant principal at Blue Valley Southwest.

His LinkedIn page shows Peres earned an undergraduate degree from Emporia State and a Master’s in Education from Baker University.

Peres’ hiring did not sit well with some in the SM East community, which became apparent on SM East’s official Instagram account when Peres’ hiring was announced on April 27.

Along with notes of congratulations were several pointed comments centered on the fact that Leonard had not been selected for the school’s top job.

“No disrespect to Mr. Peres intended,” one commenter said, “but as a former parent at SME I’m seriously wondering about the hiring practices of SMSD. How can a highly-qualified, experienced and ENGAGED professional such as Dr. Leonard be overlooked for this role? It should have been a seamless transition for the school and the students to place her in this role.”

“Y’all had a committed, proven and respected leader of the Lancer community in Dr. Leonard. She’s been looked over several times and, as a district that claims they are developing an equity lens, this is appalling. So few female head principals in the district. Especially at the high school level,” Muhammad wrote.

Leonard is a well-known figure in northeast Johnson County.

When Sherman’s promotion was announced at the beginning of April, The Harbinger, SM East’s student newspaper, published a story suggesting Leonard was the popular choice among students to become the next principal.

Her LinkedIn profile shows she has more than 20 years’ experience as a school administrator, with stints at Pembroke Hill and in the North Kansas City school district before coming to Shawnee Mission.

She also has a Master’s from UMKC and a Ph.D. in Educational Administration and Policy Studies from the University of Kansas.