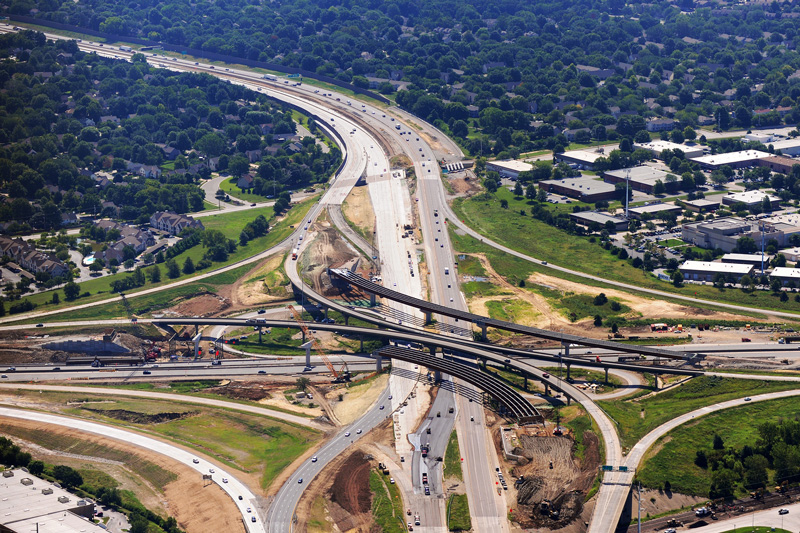 Rep. Sharice Davids has requested roughly $600 million in federal funds to supplement work on the Johnson County Gateway, the confluence of I-35, I-435 and K-10 highways in Lenexa. Above, a view of I-35 and I-435 interchange construction. Photo courtesy Kansas Department of Transportation.

Rep. Sharice Davids has requested up to $617 million in federal transportation funds to help pay for a few major highway projects in Johnson County, the lion’s share of which are aimed at funding long-hoped-for work in Lenexa.

The projects are designed to improve traffic flow as Johnson County highways become more congested, particularly a stretch of U.S. 69 through southern Overland Park as well as the interchange of I-35, I-435 and K-19 highways, often referred to as the Johnson County Gateway, in Lenexa.

“Each of these projects would help keep us safe and reduce the congestion that has plagued our roadways — including U.S. 69, which has been an important priority for the district since before I took office,” Davids said in a statement. “They would also bring good paying jobs and economic development to the area, giving our small businesses a much needed boost.”

The congresswoman, representing the Third Congressional District of Kansas, submitted the projects in late April to the Committee on Transportation and Infrastructure.

That committee is planning to advance surface transportation authorization legislation later this spring as part of H.R. 2, the federal “Moving Forward Act.”

Davids’ office accepted requests from cities and the state for partial or full project funding on various transportation projects.

Here’s a complete list of the projects her office submitted, which altogether total about $629 million. Davids’ requests include:

A boost to state funding?

The Kansas Department of Transportation maintains authority over all Kansas highways.

However, both  projects in Lenexa have not yet been earmarked funding from KDOT.

Lindsey Douglas, deputy secretary for the Kansas Department of Transportation, said the department is hopeful that Rep. Davids’ wishlist can bring in some federal dollars to fund these projects.

“We’re hopeful that if we get some additional federal funding on a project, that kind of gives us this project on sale a little bit,” Douglas said. “We’ll get some additional revenue in the system that we didn’t anticipate. And that will help us accomplish more and achieve more of the transportation goals around the state.”

KDOT is studying the U.S. 69 corridor between 103rd and 179th streets. KDOT asked for a federal boost to fund improvements at the 167th Street interchange.

Why is Lenexa asking for so much?

Meanwhile, Lenexa and KDOT anticipate that traffic congestion will eventually become a problem at the Johnson County Gateway where three major highways converge.

“I would love to say that we will have the money to do projects in advance of there being a significant problem, but the reality is we just don’t have the resources to build everything before it becomes a problem,” Douglas with KDOT said.

Highway projects are funded by the state’s Eisenhower Legacy Transportation Program (IKE), a rolling two-year program designed to be flexible as needs arise.

Douglas said the IKE program sets aside $2.3 billion for modernization and expansion projects across Kansas for a 10-year period.

“We see this everywhere, all over the state,” Douglas added. “It’s a struggle to prioritize those dollars, knowing that we’re not going to have the resources to be able to address everybody’s priority.”

““It’s the busiest interchange in our state, and it happens to lie within our geographic boundaries.,” Nolan said. “I realize that this seems very odd that just a single city is advocating for this, but it affects our local streets, it affects our arterials, it affects the transportation movement in our community, specifically, but also in the county and in the metro, really.”

The Lone Elm interchange didn’t make the cut on Davids’ office’s wishlist, but Lenexa is moving forward with working on that project using funds it has already acquired, Nolan added.

“These large requests kind of take years to go through, and if there’s opportunities for federal partnerships, we feel it’s better for us to get that ball moving now, realizing that it’s likely not to be funded at this point in time,” Nolan said.

Douglas said the state will review the Johnson Gateway and other infrastructure projects within IKE’s two-year rolling program.

Ellie Turner, a spokesperson with Davids’ office, said the U.S. 69 project in Overland Park, unlike the much larger proposals in Lenexa, is a “shovel ready” project, meaning construction can begin promptly.

Additionally, Davids’ office believes that submitting the projects in Lenexa “elevates the stature of the projects” and could lead to at least part of the $600 million request being funded.

The K-10 Corridor Expansion encompasses K-10 from the I-70 interchange west of Lawrence to I-435 in Lenexa, providing a major route for east-west travel through the region, according to KDOT.

Douglas said KDOT hopes to create additional capacity — for a total of three lanes in each direction — to accommodate the growing rush hour traffic, particularly between Johnson County Gateway and K-7 Highway. 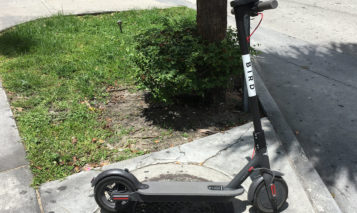 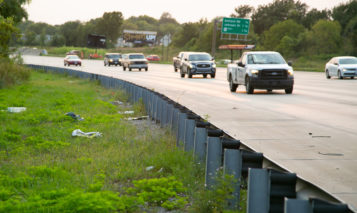 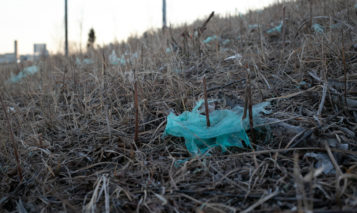 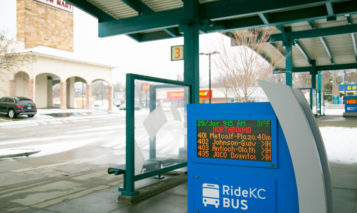