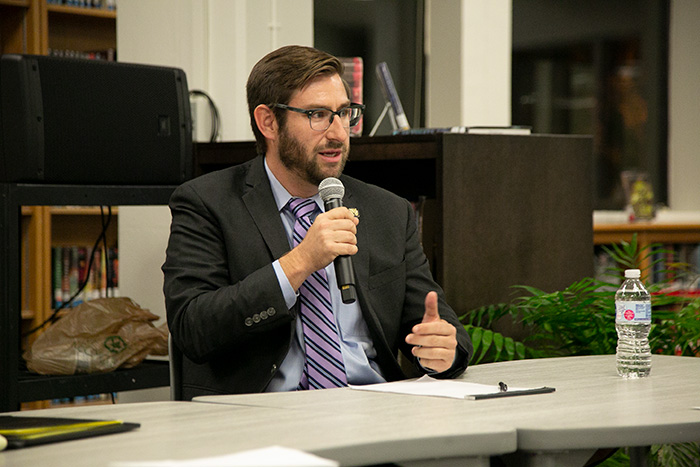 Rep. Brett Parker, a Democrat from Overland Park, says he plans to step down some time this year after the end of the 2021 session. He is set to become the executive director of a new political organizing group being put together by former Kansas Sen. Barbara Bollier of Mission Hills. File photo.

Brett Parker, a three-term Democratic state representative from Overland Park, says he plans to step down from his seat after the formal end of this year’s legislative session.

In an email to supporters Tuesday, and in a message repeated on Twitter and to the Shawnee Mission Post, Parker said he plans to “carve out more time for the most important people in my life and explore the next steps in my career.”

I've given all that I have to the #ksleg these past 5 years & it has been the privilege of a lifetime. It is bittersweet to wrap up my time in office but I am excited explore the next step in my career & create more space for friends & family.

Parker’s full emailed statement to the Post read as follows:

“Serving in the House has been the privilege of a lifetime but it comes with a lot of personal sacrifice. I’ve given everything I have to my time in office and am proud of the work I’ve been a part of. Moving forward, I’m anxious to carve out more time for the most important people in my life and explore the next steps in my career.”

In a press release this week, the group described itself as a “centralized volunteer organization for community organizing and deep canvassing across Kansas to build a year-round operation.”

Bollier, a Mission Hills resident and former U.S. Senate candidate, will serve as chairperson of Prairie Roots’ board.

“To live up to our history as the Free State, we need to ensure that Kansas is a place where every voice is heard, all are welcome, and everyone can thrive. Kansans need politics that reflect their values,” Parker is quoted in the release.

The release said the group’s initial focus will be on organizing voters in Sedgwick County around Wichita.

Parker was a public school teacher and political newcomer when he first ran for office in 2016, when he beat incumbent Republican James Todd.

Parker, who grew up in Olathe, was a teacher in the Olathe School District when he first ran for office and remained with the district during his first few years in office before formally leaving the district last year.

Education funding proved to be one of his top priorities in Topeka, as well as Medicaid expansion and a bipartisan approach to redistricting.

He also repeatedly decried efforts by the Republican-controlled legislature to add new limits on voting.

“I’m grateful for so many people for supporting me and believing in me. I am so proud of the work of our Democratic caucus day in and day out in Topeka. They will continue to make us all proud,” Parker tweeted Tuesday.

Deann Mitchell, chairperson of the Johnson County Democratic Party, said once Parker has formally stepped down, precinct leaders in Kansas House District 29 will meet to elect a replacement to serve out the remainder of Parker’s term, which goes through the 2022 legislative session.

That must occur within 21 days of Parker officially resigning.

Parker said he will resign sometime after the official end of the 2021 session, which occurs on May 26.

He said he is announcing his intentions now to give “ample time” to anyone who wants to potentially vie for the District 29 seat.