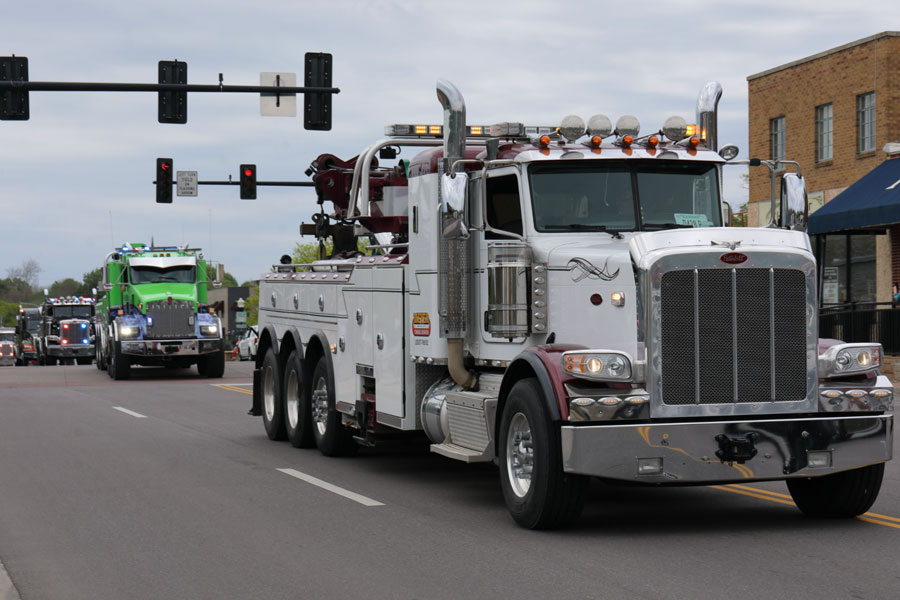 More than 100 tow trucks drove through Johnson County Friday, May 7, in honor of Joe Meyer, the owner of Overland Tow, who was killed April 29 in an accident. Some of the tow trucks displayed antique tractors and a racing car prized by Meyer. Photo credit Mike Frizzell.

Meyer, 67, was an owner and operator of Overland Tow Service. He died April 29th in northern Overland Park in what investigators called an “industrial accident” when he was reportedly crushed when a vehicle fell off a tow truck.

The remembrance parade in honor of Meyer took place Friday, May 7. The long line of tow trucks started in Olathe and ended along Merriam Drive in Overland Park at Overland Tow’s shop.

The route took the tow trucks past St. Joseph’s Catholic Church in Shawnee, where family and friends had gathered for Meyer’s funeral Friday morning.

Many people Johnson Drive to watch the parade, led by a tractor-trailer and tow trucks carrying several antique John Deere tractors and one of Meyer’s race cars.

Meyer was originally born in Indiana, the oldest of 10 children, according to an obituary, and moved to the Kansas City area in 1972 to attend technical school.

He owned and operated Overland Tow with his wife, Lori. They lived in Shawnee and had three children together, sons Chris and Dusty and daughter Hannah, and ran several businesses.

“Joe was a race car builder and drag racing enthusiast. He enjoyed racing the cars he built, and passed his love of the sport along to their children by building cars for each of them to race,” the obituary reads.

“Joe also enjoyed BBQ competitions, motorcycling, hunting and fishing,” it continues. “In addition to being an exceptional husband, father, grandfather, brother, cousin and uncle, Joe was a friend to everyone he met.

A full video of the parade honoring Meyer can be viewed at Operation 100 News’ Facebook page here.