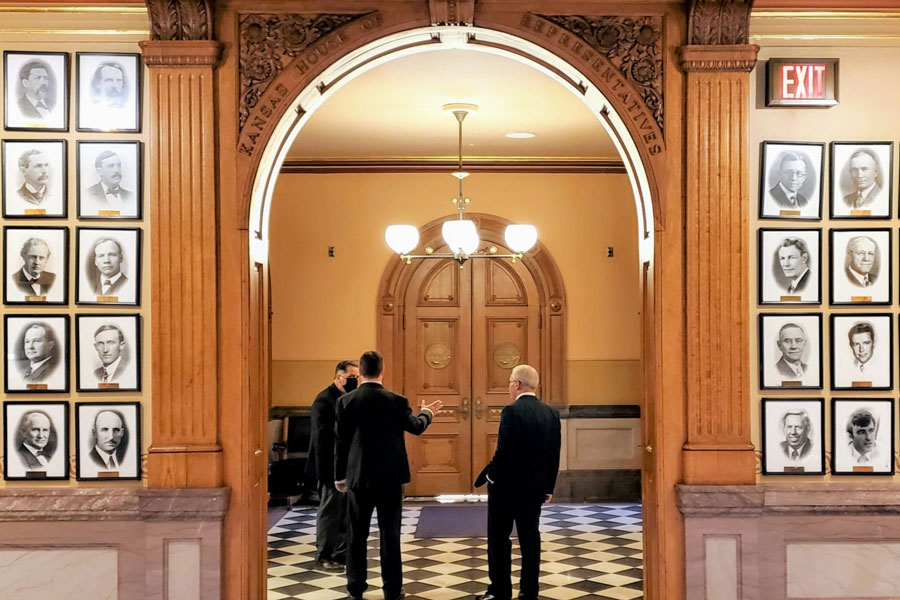 Conservatives flexed the strength of their legislative supermajority, but they failed to override Democratic Gov. Laura Kelly on some key issues. Above, legislators outside the door to the Kansas House. Photo credit Stephen Koranda/Kansas News Service.

By Abigail Censky and Stephen Koranda

After ousting moderates and electing more conservatives in the 2020 elections, Kansas Republicans road-tested their brawny supermajority at the end of the 2021 legislative session.

That political muscle allowed the conservatives who control the Legislature to override several of Democratic Gov. Laura Kelly’s vetoes.

Senate President Ty Masterson pledged Republicans would go on a “veto-override-a-rama” after Kelly struck down multiple GOP priorities with her veto pen. They exercise the might of that supermajority on conservative bedrock issues like tax policy and Second Amendment rights.

Republicans issued a decisive rebuke to Kelly when they overrode the governor’s veto of a tax-cutting bill.

Democrats cautioned they were heading back to the atrophied years of tax cuts that defined the era when Sam Brownback was governor.

“I worry that we always seem to flirt with the same problem that we had with the last recession in 2008 when we came back and gave tax cuts,” Sen. Tom Hawk, a Manhattan Democrat said, “ and then our state did not recover as rapidly as those around us.”

But Caryn Tyson, the Republican chair of the tax committee, said that was just “gloom and doom.”

“That’s money that’s going to come back into the Kansas economy,” Tyson said, “not be used to grow government.”

The tax cuts increase the standardized deduction for individuals and let some people itemize their deductions in Kansas — even if they don’t itemize on their federal income tax returns. It’s expected to cut state tax collections by hundreds of millions of dollars over the next several years.

Kelly said the lower age posed a safety issue, and she often cited the idea of how it might allow more guns on college campuses.

Republicans banded together to overturn her opposition. Some pointed out that 18-year-olds are adults and should have the right to carry a concealed weapon.

Others said it was already legal for 18-year-olds to carry a weapon openly, and the added requirements of getting a state permit were beneficial.

“This requires them … to get training,” Republican Rep. John Barker said. “That’s a positive move.”

The new law includes provisions that make it a misdemeanor to return more than 10 advance ballots on behalf of other voters, and makes impersonating an election official a felony.

“Our county clerks, election officials and secretary of state’s office, they do an amazing job, and we must support them by plugging gaps and closing loopholes and making our laws stronger, ” he said.

The new law mimics a swath of voting restriction bills passed in other state legislatures. It passed narrowly — squeaking out of both chambers with only one more vote than what’s necessary to override the governor’s veto.

Overland Park Democratic Rep. Brett Parker said Republicans bypassed the standard rigor of the legislative process in ways that make it harder for people to vote.

“This is not what we got elected to do,” he said. “We should be making it easier for people to legitimately vote.”

The supermajority faltered on another bill that would have banned transgender athletes from girls and women’s sports.

Similar bills have been introduced in 33 other states, crafted from model legislation drafted by the conservative American Legislative Exchange Council. The bills triumphed in states like Tennessee, Mississippi, Arkansas, and South Dakota.

But in Kansas, even some Republicans blanched at legislating a ban that they argued would fly in the face of limited government and individual rights.

“This is nothing but piling on,” he said.

The bill, deemed bullying by Democrats, was killed in the end by Kansas City Democratic Sen. David Haley, who cast the deciding vote after a parliamentary pause.

He said it was “probably one of the most difficult votes I’ve had to take.”

Republicans backed off the idea of creating a system that would let thousands of struggling students attend private schools using state tax dollars.

To give the idea a better chance, lawmakers tied the controversial voucher program to billions of dollars in state public school funding. But there was enough opposition that the entire bill ultimately failed.

During the final week of the session, lawmakers hashed out a compromise that included the school funding and some policy changes Republicans wanted. It would set limits on remote learning and expand a tax credit for low-income scholarships to private schools.

The plan also included provisions aimed at measuring how students are performing, including guidelines for schools to monitor student improvement and report cards determining how well the state is doing educating kids in the foster care system.

Democrats like Rep. Valdenia Winn were willing to support those, and the bill ultimately passed with big bipartisan majorities. It continues the state on a funding track that ended a years-long lawsuit over school spending.

“The policy pieces are acceptable because they’re about accountability,” Winn said on the House floor.

No tax cuts for gyms

The bill would reauthorize a statewide property tax that helps fund education. But more controversial provisions were added, including a program that would give property tax rebates to businesses that were forced to close or scale back operations during the pandemic because of government orders.

It was a priority of an advocacy group, which includes Wichita-based Genesis Health Clubs owner Rodney Steven.

Opponents said groups like the YMCA offer community service programs that private health clubs do not.

“There’s no question we’ve got a problem here,” Steffen said on the Senate floor. “Health clubs are just a symptom of the problem.”

After the measure failed, a conference committee removed the tax break for gyms and the pandemic property tax refunds.

Instead, the bill would commission a state study on government and non-profit groups competing with private businesses.

A draw on marijuana

Historic medical marijuana legislation passed in the House but was never put up for a vote in the Senate.

The plan was tailor-made to garner support from the Legislature’s most conservative members. For instance, it came with rules that most patients need to have a six-month relationship with their doctor before receiving a medical marijuana recommendation, marijuana couldn’t be sold in forms that can be smoked or vaped and an option for counties to opt-out of growing and dispensing.

In the House, there was a split among Republicans. Some conservatives, like Rep. Brett Fairchild argued, legalization for medicinal use was a consistent small government position.

“We take that limited government position when it comes to guns, when it comes to taxes,” he said. Fairchild argued that same standard should apply to medical marijuna “if it’s prescribed by their doctors and it’s something they really need.”

Others like Rep. Pat Proctor of Leavenworth contended legalizing medical marijuana would be a gateway to legalizing recreational marijuana and “death blow” to his town.

“This bill is setting us on the path toward recreational marijuana,” he said. “If you don’t believe that then I would ask, why are we selling it in dispensaries instead of pharmacies? Why are we growing it in buildings instead of farms? Why are we dispensing it in any other form other than pill form?”

The measure passed 79-42 in the House. Masterson said the Senate hadn’t had enough time to thoroughly examine the legislation to warrant a vote. However, the bill which passed with bipartisan support will be ready for the 2022 session.

Abigail Censky is the political reporter for the Kansas News Service. You can follow her on Twitter @AbigailCensky or email her at abigailcensky (at) kcur (dot) org.

Stephen Koranda is the Statehouse reporter and news editor for the Kansas News Service. You can follow him on Twitter @Stephen_Koranda or email him at stephenkoranda (at) kcur (dot) org.