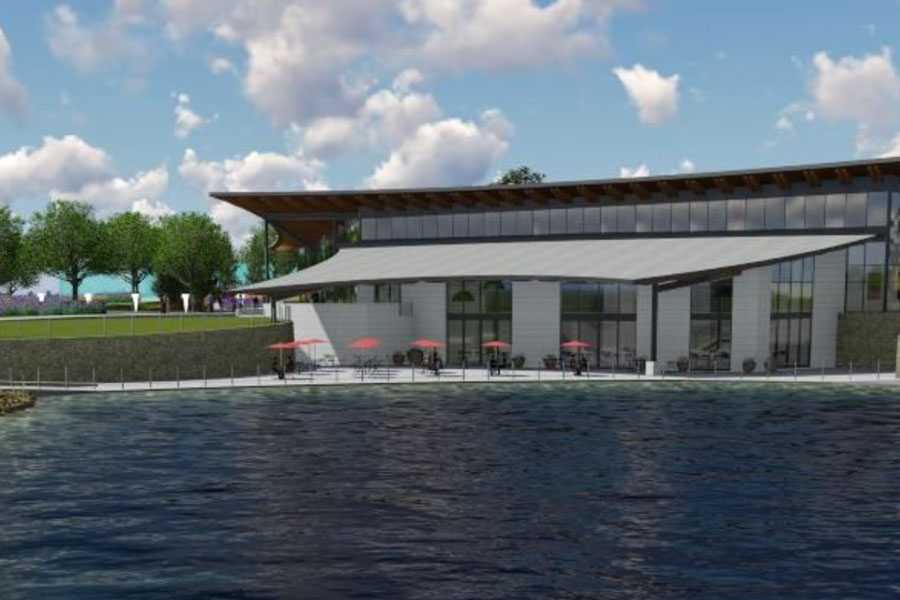 City officials say increasing prices of construction materials exacerbated by this past winter's major storms, which caused infrastructure damage in Texas, has pushed the total cost of the long-anticipated Overland Park Arboretum visitors' center to $19.3 million. Above, a rendering of the center's main building next to a pond. Image courtesy Confluence.

A visitors’ center long in the works for the Overland Park Arboretum will overrun its budget by even more than originally anticipated, due in part to fast-rising cost of building materials, a city council committee learned this month.

City officials had been expecting a significant cost overrun since December. But once the materials were bid, it became apparent that the project would be in the red by closer to $2.6 million, rather than by the $1.4 million initially projected.

Most of the added expense is due to increases in the cost of asphalt, concrete, steel, sheet metal, plastic pipe and timber, said Bryan Toben, assistant director of recreational services.

Those costs have been increasing in part because of high demand for materials to rebuild Texas towns damaged by last years’ winter storm.

That brings the project to $19.3 million. Earlier estimates were that it would cost $17.25 million.

A visitors’ center has been at the top of the arboretum’s priority list for years as a way to expand offerings from the smaller space now serving that purpose. City and arboretum officials have been working on the idea since 2013.

The center project includes more ponds and drives, a garden area and circular “wedding lawn” in addition to the visitors’ center building.

However, the plan no longer includes an amphitheater, which became controversial with neighbors two years ago who opposed that aspect of the project over concerns about crowd noise and traffic.

The additional cost puts more pressure on private donations to fill as much of the gap as possible.

Vicki Lilly, executive director of the Arts and Recreation Foundation of Overland Park, said the group has pledged an additional $1 million to bring its total donations to the project to $11 million.

Sonya Wright, chair of the Friends of the Arboretum, urged the council to commit soon.

“The message the Friends of the Arboretum board asked me to pass along to you this evening is a strong encouragement not to delay this project any longer,” she said.

Even with the added donations, there will still be a $1.6 million gap between what was budgeted and the actual cost.

That likely would be incorporated into the long-range capital improvements fund.

The committee voted unanimously to approve the change in the building contract. If the full council approves the projected price tag of $19.3 million on May 17, that would become the guaranteed maximum price for the project.