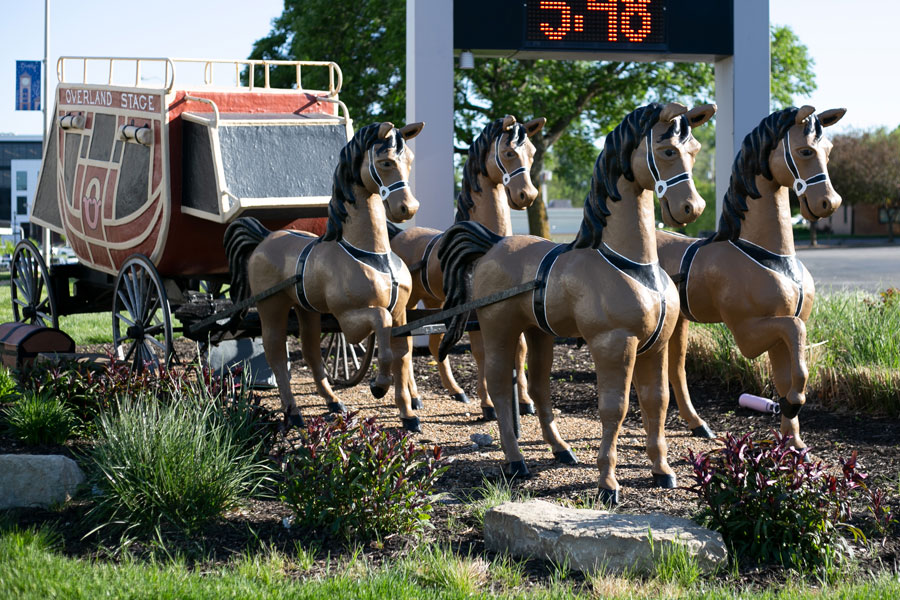 UMB Bank is set to undergo a major renovation of its branch at 80th and Metcalf in Overland Park. The site plan includes reducing the size of the current bank branch there, adding a through street, razing a vacant restaurant and removing the 'Overland Stage' sculpture (above) at the corner of the busy intersection. Photo credit Leah Wankum.

A major redevelopment is in the works for the UMB Bank at the corner of 80th Street and Metcalf Avenue in Overland Park.

If the proposal makes it through the city approval process, the building would become significantly smaller and a vacant restaurant on the south part of its lot would be removed.

Also, according to plans filed with the city, the signature horse-drawn stagecoach at that corner would be removed.

UMB Bank has applied for a certificate of conformity for the plan to meet the building requirements particular to downtown. The lot at 7109 W. 80th Street currently has a large brick building of one and two stories, with a large drive-thru in the middle. The free-standing restaurant nearby is a former Winstead’s.

The bank would become mostly a one-story building, parking would be reconfigured and a central street would be added to connect Floyd Street with Metcalf.

The new design would put a large plaza at the corner of 80th and Metcalf, with the monument sign remaining. The “Overland Stage” coach sculpture and its team would be removed, according to the site plan.

No information was available on what would be done with the sculpture or whether it would be moved to another location.

During the rehab of the main building, a temporary bank would be set up for two years in the former Winstead’s. After the new bank is finished, the restaurant building would be razed.

Cutting the size of the current bank, removing the restaurant and putting in a connecting street essentially cuts the existing lot in half, with a sizable area to the south to be available for an as-yet-undetermined redevelopment project.

At last month’s Overland Park Planning Commission meeting, development lawyer Curtis Petersen said there are no specific plans yet for that area, and that it will be seeded over in the meantime.

The bank’s leadership plans to stay at that location for the foreseeable future, he said, and invites input on what type of development should go on the southern part of the lot.

The commission approved the certificate of conformity last month and the full city council gave its blessing without discussion Monday.