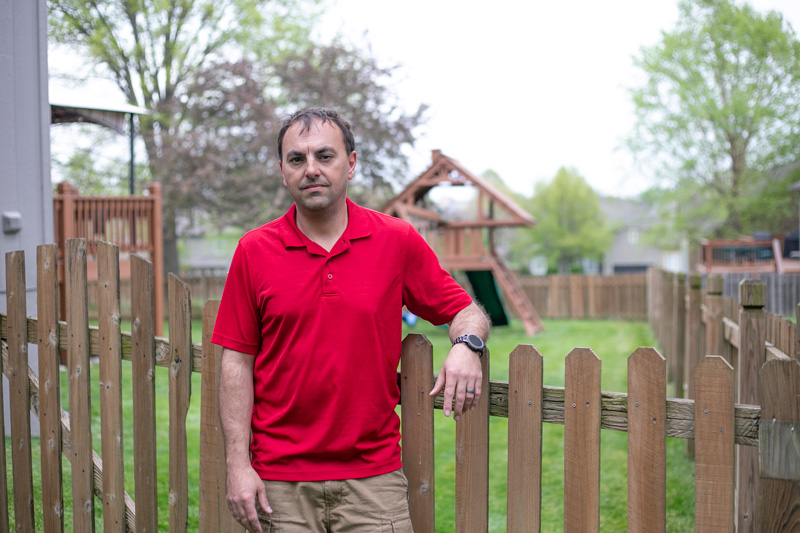 “I’m a guy that operates out of my house that has a tactical equipment company. If I can source PPE, that should tell you that there’s not a real PPE shortage." Fred Stipkovits' home-based business Night Raptor Tactical has taken more than $200,000 in orders for PPE, like face masks, from the Shawnee Mission School District since last summer. Photo credit Leah Wankum.

It was perhaps the name more than anything that gave some parents and patrons of the Shawnee Mission School District pause back in February.

Night Raptor Tactical has a logo that displays its name in heavy type, superimposed over red crosshairs. On its website and Facebook page, there are pictures of gun and crossbow accessories, hunting photos and pictures of survival kits.

What was a business like Night Raptor doing as a major supplier of the district’s coronavirus protective gear? How did such a business, known more for selling gun scopes and MREs, beat out bigger, more established competitors?

The question lit up the social media channels of the parent-led group SMSD Watchdogs for a time. Some in the group speculated that the business was an opportunistic attempt to sell flimsy products. Others suggested cronyism, noting that Night Raptor is run out of a residence just across the street from where SMSD’s health services director lives.

The reality is far less juicy.

Yes, Night Raptor’s owner had a neighborhood contact with the district. But a check through the district’s purchasing records turned up no evidence to back up the cronyism charge. SMSD’s orders for PPE to Night Raptor went through a district purchasing officer and the school board, not the health services director.

Instead Fred Stipkovits, Night Raptor’s owner who runs the business out of his Shawnee home, says he became a player in the PPE supply business the old fashioned way – through competitive prices and word-of-mouth.

“I feel like the wrong message is out there, that I’m some big bad scary gun company. That’s not the case,” Stipkovits told the Shawnee Mission Post. “Not all companies that have scary names are bad.”

Who is behind Night Raptor Tactical?

Images aside, Night Raptor does not sell guns. Ammunition is not sold online either. The site does sell gun accessories like rifle scopes, gun cases and ammo cans, plus emergency prep kits.

Stipkovits said he used to sell guns but got out of that business because he doesn’t like to sell guns and ammunition to people unless he can check them out first, and the online environment isn’t a good place for that.

“I’m a big gun person, but I’m a firm believer that our gun laws are flawed,” he said. “I wanted to vet who I’m selling that kind of stuff to and be comfortable that it’s not falling into the wrong hands. I’m a very conscientious and responsible gun owner and supplier of those types of things. I got out of that business because it didn’t fit the way I wanted it to go.”

Stipkovits, 42, is a U.S. Coast Guard veteran who for ten years was Chief of Homeland Security Intelligence Operations in St. Louis.

While there, he was injured in a high-speed boat chase on the Mississippi River in which he used his patrol boat to stop someone who was ignoring a federal security zone.

After being ejected through the canopy of his boat, Stipkovits underwent six surgeries and a rebuilt kneecap. Those injuries are the reason he can list Night Raptor as a business owned by a disabled veteran.

After 2006, he made his way to the Kansas City area and now has a day job managing government contracts for companies that manufacture cargo control products.

‘I’m a guy that operates out of my house.’

He started Night Raptor in 2012 as a side job. It was a way to pursue his own interests in the outdoors and camping, he said.

“I’m not a prepper, but I’m someone who is very prepared for any situation, and so I wanted to be able to source my own supplies and toys at more affordable rates. I started Night Raptor Tactical to do just that and then it kind of grew from there,” he said.

His background gave him a lot of contacts in law enforcement, and they and their agencies began coming to his business for equipment, he said. That business in things like body armor, first aid kits and hunting and camping gear helped him build up a network of suppliers.

Once the pandemic hit, he was able to use it to find PPE.

Suddenly, family and friends were struggling to find masks and sanitizing wipes, and store shelves were bare. Stipkovits was able to turn to his supply network to help them out, he said.

Then law enforcement agencies, veterinarians and dentists office and eventually schools began to ask as well.

It wasn’t so much a matter of shortages as a supply chain in chaos, he said. Businesses that had been ordering gloves and face shields suddenly started needing a lot more than their suppliers had them scheduled for, and they weren’t getting it.

Big suppliers, meantime, were focusing on large buyers like hospitals and others who he suspects were able to pay more.

“I’m a guy that operates out of my house that has a tactical equipment company. If I can source PPE, that should tell you that there’s not a real PPE shortage,” he said. “It was an issue with greed, an issue with hoarding, an issue with marking up prices far beyond what they should be and that’s not how I operate.”

His pricing was usually competitive, but not always the lowest because he wasn’t buying in bulk. But Stipkovits said he was able to keep narrow margins because he has warehousing agreements that make it possible not to keep the inventory at his home.

“I’m not in this to get rich. This isn’t about the bottom dollar for me. It never was. It was about supplying those that needed the supplies because they were getting screwed by their large vendors.”

How SMSD became a customer

At the peak of the pandemic, PPE became 75% of his business, he said.

SMSD became a customer last July. From then through March 4 of this year, the district has ordered $203,400 of various pandemic-related healthcare equipment from Night Raptor, according to records provided by the district.

Stipkovits began sending pricing information to the district after learning from his neighbor across the street, the district’s health services director, Shelby Rebeck, that the district was looking for a PPE source. But he said he dealt with the purchasing department after that.

The district’s records show that Rebeck was upfront about how she knew Stipkovits. In an email to purchasing supervisor Becky Collins on July 7, 2020, Rebeck said Stipkovits lived in her neighborhood and had prices competitive with a regional purchasing cooperative and that other local districts could vouch for him.

As the summer wore on, the district kept buying PPE from Night Raptor. Stipkovits said he didn’t always win every bid, but was often the lowest price.

The district administration has been satisfied with the quality of the merchandise and has followed the law in its buying policies.

Rebeck’s only role was to put Stipkovits in touch with the district to quote prices, said David Smith, the district’s communications manager. Night Raptor won the bids when it offered the best price, he said.

The purchase that attracted the most social media attention was in January, when the district approved an order for 300,000 KN95 face masks.

The SMSD Watchdogs Facebook page later demanded the district immediately stop that particular purchase, based on their suspicions of cronyism and Night Raptor’s connections to the gun industry.

Who’s up for a good old-fashioned Watchdogs deep dive?

Had the district gone with another vendor, it would have spent more than what Night Raptor charged, which turned out to be $72,000.

According to the district’s notations, there were eight other quotes on those masks, ranging from a high of $2.33 apiece. Night Raptor came in at 24 cents apiece. The next closest bid was 24.9 cents apiece.

“We are not allowed to make decisions about purchasing due to a vendor’s other legal business interests, based on either our or anyone else’s political beliefs. This is a really important public policy restriction, which we support,” Smith said in an email response to the Shawnee Mission Post.

Stipkovits didn’t engage in the social media flap but says he’s sorry his critics didn’t get to know him before initiating the conversation.

Stipkovits says he did reach out. When questioned by the Post in a Facebook message about whether they had spoken with Stipkovits, someone from the group who did not want to be identified replied, “Why would we meet with him?”

That person added that she doubts the district is being honest about the bids and that the connection between Night Raptor and SMSD is still hard to stomach given business’s link to the gun industry.

“We feel pretty gross about it still,” she said.

Stipkovits said he has saved the district tens of thousands of dollars and is a frequent giver to charity.

His business has “done more to insure neglected front line workers of the community are taken care of than any major corporation did during this pandemic,” he said.

“Not all gun people are bad,” he said.