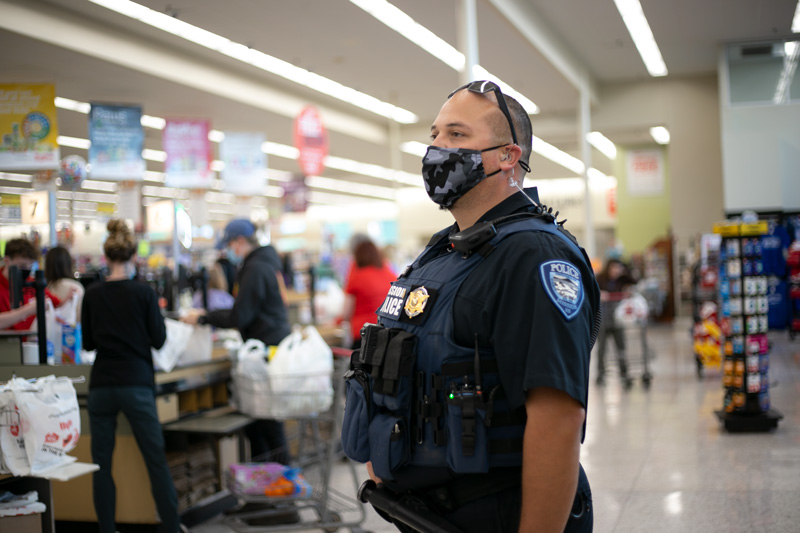 Johnson County’s mask order has been lifted, but businesses and organizations that still require masks on their premises can call police if someone without one refuses to leave.

Regardless, law enforcement agencies who responded to the Shawnee Mission Post’s request for comment on the matter generally say they will be in favor of providing education and calming down mask-related conflicts first, before resorting to charging someone with trespassing.

At the same time, the Johnson County District Attorney’s office says it discontinued its COVID-19 complaint hotline in late March, after the statewide executive order regarding masks expired.

The hotline had been in place since summer 2020. District Attorney Steve Howe said his office had no enforcement authority of Johnson County’s public health orders.

Johnson County Sheriff Calvin Hayden said his office has no enforcement authority over public mask wearing now that the governor’s mandate expired and the county health order has become a recommendation and not a mandate.

Nonetheless, businesses still have the right to request masks and other health precautions from their customers, Hayden said.

“When a business asks you to wear a mask, if you don’t like that you can go on to another one,” he said.

Although the Sheriff’s office will not be proactively policing public mask wearing, Hayden said deputies can always be called on to mediate conflicts that could arise between those who are masked and unmasked.

“That’s the way with any law enforcement agency,” Hayden said. “If they aren’t getting along, we’ll do anything we can to defuse the situation.”

People are welcome to call dispatchers for guidance if they have concerns, he said.

“There’s no reason to argue about it. People should try to get along,” he told the Post.

The sheriff’s office and local police departments said they have seen very few mask disputes in recent weeks. And even though the county no longer requires masks to be worn in public, police departments maintain the same perspective — that reaching a peaceful resolution is preferable to arrests and charges.

Here’s how law enforcement agencies in northern Johnson County plan to approach situations in their communities following the end to the county’s formal mask mandate:

Fairway police officers will continue to respond to complaints from businesses if unmasked people refuse to leave. However, Chief J.P. Thurlo said his officers would instead focus first on trying to calm the situation.

Thurlo said his department doesn’t anticipate getting complaints from residents trying to police each other. In fact, his department has handled very few, if any, mask disputes over the past year.

However, it’s up to businesses whether they would pursue trespassing charges if an unmasked customer refuses to leave, and Fairway Police officers would serve that complaint if it came to that, Thurlo added.

Lenexa Police will continue to respond to conflicts, including mask disputes. Officer Danny Chavez said the department has had very few, if any, complaints about masks or social distancing in many months.

Chavez said the department doesn’t expect any spikes in calls about mask disputes now that the county’s mask order is lifted.

“Our police department handles conflicts between citizens every single day on just about any issue you can think of, legitimate and ridiculous,” Chavez wrote. “Masks won’t be any different.

“Just like other calls, some may be handled by dispatch (informing the caller that we won’t respond on the matter), some may get a police response, some may be told it’s a civil matter that the police have no say in, some may be issues of trespassing (if a citizen refuses to follow a stores rules for example). In other words, these calls will be handled like the many thousands we already respond to,” he said.

Chavez said the Lenexa Police Department would defer to the Johnson County Board of County Commissioners on any public guidance about masks and social distancing.

The city of Merriam and its police department will continue to recommend but no longer require the public to wear masks and maintain social distancing, wrote City Administrator Chris Engel in an email.

The police department has not yet responded with further information.

For the time being, the Mission Police Department is acting as if the county’s mask mandate were still in place.

Chief Dan Madden said the police department is waiting for further direction from the Mission City Council, which will meet on Wednesday.

“I’m sure it’s possible officers could be called to try to resolve situations involving masks,” Madden wrote in an email. “I don’t anticipate this will be a big problem since we haven’t had too many complaints when the masks were required.”

If Mission Police officers were called to resolve a situation involving masks, officers would do their best to educate both sides and hope to resolve the situation diplomatically, Madden said.

“In cases where a resolution could not be reached, officers would need to look at the totality of the circumstances before making the decision to charge someone with trespassing,” he added.

A spokesperson for the Overland Park Police Department declined to provide a response for this story.

“As you already know I can’t and won’t speculate,” Officer John Lacy said. “We have not seen the ‘post-mask plans’. Meanwhile, you can contact the Johnson County COVID hotline at 913-477-8343.”

Shawnee Police officers don’t anticipate handling many mask disputes between citizens, at least any more than the department handled conflicts before the pandemic and the mask mandate began last spring.

“I have personally been to other communities in the region that have lifted their mask mandates and people seemed to be able to co-mingle just fine,” wrote Major Jim Baker, support services division commander for the department. “Some with masks and some without, based on personal choice.”

Baker said he suspects that officers may handle some instances where businesses decide to continue requiring masks and customers without them refuse to leave. This could result in a trespass violation if an unmasked customer refuses to leave after being asked in front of a police officer.

Baker said the department has had “very few calls” especially in recent months regarding mask disputes.

“Regardless, we will continue to handle conflicts between citizens, who have differing beliefs and opinions, as we always have with the intent to peacefully mediate the situation to an acceptable resolution,” Baker added.

“Throughout the pandemic we have generally asked for compliance with the current health orders, provide guidance when appropriate, and asked for patience and respect for differing opinions as we all work together through unusual times,” wrote Chief Greg O’Halloran.

Technically, trespassing charges could be in the realm of possibility, but it is “certainly not a desired outcome,” O’Halloran added.

“We would lean toward educating all parties about the various aspects involved in the situation, and try to resolve the matter amicably, without charges,” he wrote.

Juliana Garcia and Roxie Hamill contributed to this report.