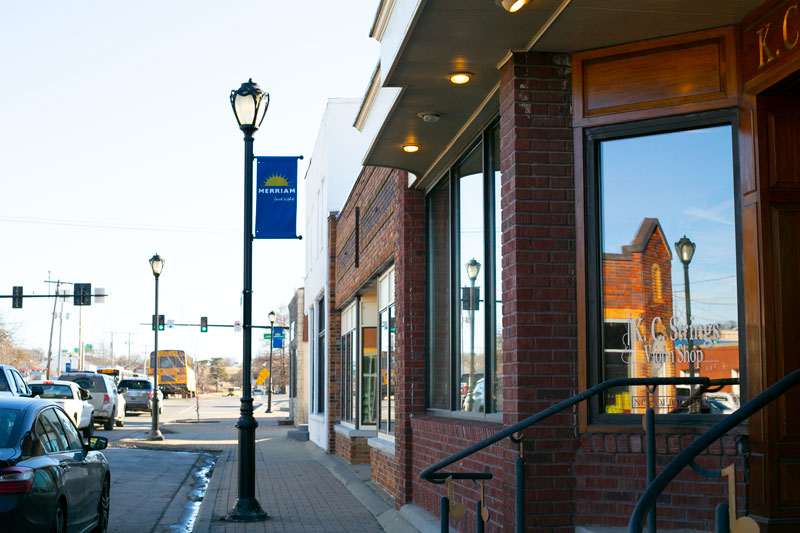 The city of Merriam's five-year capital improvement plan draft includes several road projects, placeholder funding for downtown revitalization efforts and city hall improvements. Merriam Drive from Johnson Drive (above) to 55th Street is on the list for improvements in 2023, and downtown Merriam revitalization will be ongoing through 2026. File photo.

Merriam’s plan has nearly $19 million worth of  so-called “medium” projects planned for the next five years, most of them road projects, in addition to other “minor” and “major” projects.”

Below is a look at the road improvement projects Merriam intends to do as outlined by its capital improvement plan draft.

The following are all considered “medium” level projects, according to city documents:

All but the W. Frontage Road improvements occurring in 2022 will be leveraged against county funds, City Administrator Chris Engel said. As a result, Engel said $9 million will be funded via grants and other, non-city dollars.

“When we did the quarter-cent sales tax initiative, we told our residents that what we do is we leverage those dollars and we turn those dollars into more dollars,” Engel said during the city council work session. “We’re continuing to do that. We’re continuing that trend where we maximize it to its full potential.”

In addition to road projects, including pavement improvements, Merriam is planning to allocate funds to a comprehensive bike and trail plan study, city hall exterior improvements and other smaller scale projects from 2022 to 2026.

The biggest “major” project on the city’s radar is related to upper Turkey Creek, a $43.1 million project that would likely occur from 2024 to 2026 and be funded by local and federal money dollars.

The city council will continue to discuss the city’s capital improvement plan throughout the 2022 budget process.

Although staff is confident the projects in the draft will be kept in the plan, it is still subject to change and formal approval.