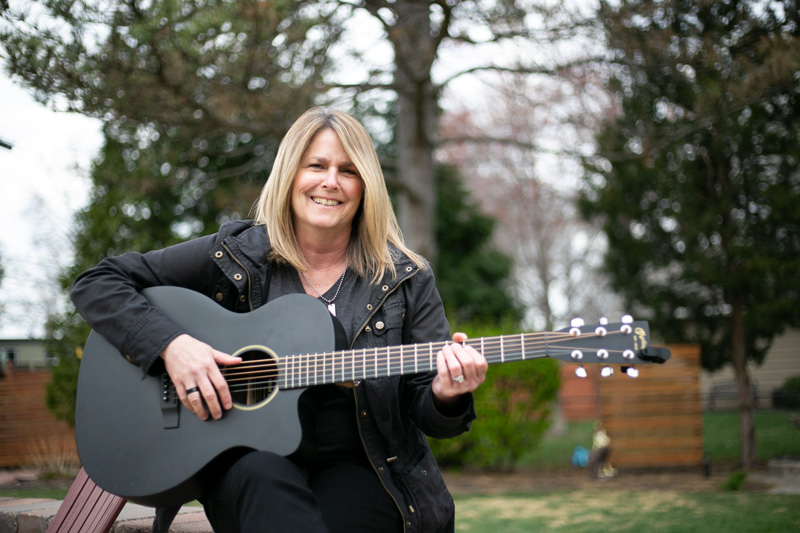 By day, Alisa Jefferson works in insurance. By night, she’s a rockstar.

Jefferson has always loved music. A singer and bass player, she’s been part of several ‘80s cover bands and music projects over nearly three decades in the Kansas City area and beyond, performing at local nightclubs like The Hurricane and Davey’s Uptown.

For the past several years, she’s been with Radial Red — their first show back from the pandemic is June 12. Check out their first album, Moving Skies, here. She actually met one of her band members, Barb Wilmoth, through the Kansas City Women’s Music Network, of which Jefferson is one of the early members.

During pandemic time, Jefferson has been working on a project of her own: her first solo album, which she hopes to release in June through SoundWorks Recording Studio in Blue Springs, Missouri.

Born and raised in Kansas City, Missouri, Jefferson graduated from Hickman Mills High and then took an insurance job at Universal Underwriters. With a lifelong career in the same field, she works for Travelers Insurance.

Jefferson lives in Mission with her wife, Stacy, and their two busybody golden retrievers, Rigsby and Hannah.

If I didn’t wake up every day and I couldn’t do what I do, I would be completely lost.

I remember dreaming and fantasizing as a kid, and even to the extent of turning on the stereo at full while the parents were gone, grab a broomstick just like you see in the movies, but I would seriously put on Pat Benatar and just scream at the top of my lungs. Loved it, loved it. Nobody was around, but I pretended like I was on stage and here’s my audience. Of course, the cats would be looking at me like, weeeiiiirdoooo (laughs).

It was just good old rock: Joan Jett, Pat Benatar, Journey, REO Speedwagon, all the old classic rock bands, of course. That is kind of where it all started, with young age.

At the age of 10, I got to play in orchestra. I actually wanted to play drums, but we lived in an apartment, so that was not going to work. So it’s like OK, you’ve got your choice: you can either play a string instrument or a wind instrument, and I’m like, definitely a string instrument.

So I played viola throughout school, really enjoyed it, and then I got my first acoustic guitar at the age of 13, at Christmas. It was a Carlos, some off brand I’m sure. I’ve never even heard of it since, but I still have it.

So I started taking lessons, stopped taking lessons, took a little bit of a hiatus until the early ‘90s. I fell in love with Linda Perry, the 4 Non Blondes. (She writes a lot for Pink, so a lot of the lyrics, music that you hear, I wouldn’t be surprised if some of the songs you really like by Pink were written by Linda Perry.)

I was like oh my god, her voice, I want to do that. So at the time, I was really good friends with another female guitar player, and so she encouraged me to play drums. So I bought a drum kit, and I lived in an apartment, but I did not care (laughs) because at that time, you’re on your own, you’re kind of naive and just not really considerate. You know when you’re just young, I’ll just play real light, it’s fine.

So we started our own little band, it was called Morning Fix, like a cup of joe. We were a power rock trio, it just means a three-piece band that makes a lot of noise.

Back then, the thing that I really appreciate about that time period was bands literally had to post their posters on like a pole, mail them in, we had to physically take a demo cassette, and it could have been from a god-awful practice the night before, but you’re like these people need to hear us, I know if they hear us, they’ll let us play.

And you were thankful just to get a Monday night gig. Well, we’ve never had you in here before, so I can set you up on a Monday night. And we were like OK, so we took it. I mean, you took it.

And then you got bumped up, the more you played there, they would bump you into a Wednesday night or a Thursday night or a Friday. So if you got to play in Kansas City at that time on a Friday or Saturday night, I mean, that was pretty cool.

Now, everything is so instant. You get a webpage, here’s my link, here’s this, here’s that. And I think that in some ways is a good thing, but it’s also a bad thing because I think venues, owners, get inundated with people soliciting their bands. And then how do you pick? How do you know of the 30 emails or Facebook messages that you get, how do you know other than you’re going to have to go out and do your own research, word of mouth, what have you.

But back then, it was like oh my god, here, here, look, look, here’s our cassette tape, give it a listen, our phone number’s on the back, just give us a call. Well, I’ll tell you what, I really like your tenacity, so why don’t I just have you come in on Tuesday night? Start you off on a Tuesday. And you’re like yes!

So fast-forward, 2008-ish is when I got an iMac, and that’s when stuff started happening. GarageBand comes with Mac, it is a very user-friendly way to do some self recording at home, plug and play, if you will, and able to get your music out like on ReverbNation.com. That’s when I started dabbling in doing some self recording and building my confidence.

With that, I was able to meet musicians here and there, did some collaborative, original projects, did some short stints with cover bands here in town. Started my own cover band called About Last Night, after the movie from the ‘80s. We were together for a few years, had a really good time doing ‘80s music, and just dabbled in several cover bands, if you will.

Each of those, you learn something. You grow as a musician.

When we’re all three together [with Radial Red], we practice at Barb’s, she lives in Brookside, Scott will play a little guitar riff and it’s like oh my god, what was that dude? He’s like I don’t know, I just started playing it, and I’m like no, keep on playing it, that sounds really great.

And for some reason, I have this ability — and it’s a gift, I know this, right? — to just be able to sing, and I’ll have lyrics written out, and I’ll be like OK, keep doing that, keep doing that, and I’ll pull my lyrics up and be like oh my god, this would fit this song, this cadence, this vibe. And it just happens. It’s the weirdest thing.

We took a pause between March and September of 2020. That’s when I started to write my own music. I’ve got Logic Pro at home to start writing some music. Love the band, but something I’ve always wanted to do is write my own songs and get an album out there.

Pandemic time was writing, writing. That’s all I’ve been doing.

And then James Carter, he lived here in Kansas City for a while, and then he ended up moving to Nashville, Tennessee, he started a company called You Found Music. He heard my song on The Bridge, and he reached out to me and said oh my god, that’s really good stuff, I’d like to work with you. Super cool.

So he’s actually in the process of pitching my song, it’s called “Tell Me,” he’s pitching it across the radio universe and just trying to get stations to play it, and all that good stuff.

Songwriting is therapeutic in a way. I’m able to write about what I feel and hopefully convey that to the listener in a positive light. And that’s really what this latest album is about. It’s introspection. It’s positive. There’s a song called “Six” that’s about COVID — 6 feet under, 6 feet of separation, six strings playing — so it’s correlating death to life to playing music to being in the moment.

And if anything, I think the pandemic has definitely been positive for me in that way. It’s helped me to think about what’s important, and my bucket list of having my own solo album coming out is huge.

I’m in my 50s, right? I’m not getting any younger. You almost feel like this clock, this heavy clock, is sitting on your shoulder. You do what you do for so long, and then it’s kind of like OK Alisa, get the cane, you need to move on off the stage, your voice is cracking, you don’t sound good. I mean, it happens. It’s just reality.

So for me, I feel like I’ve always pushed myself pretty hard, but just in these last couple years, I’ve really pushed myself, which has been a positive thing. It really has.