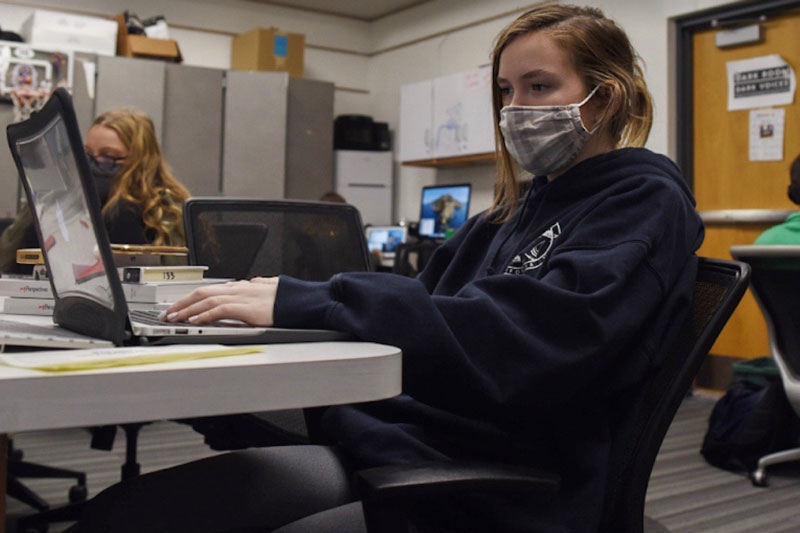 Riley Atkinson, a Shawnee Mission East senior, is the 2021 Journalism Education Association Journalist of the Year — and the Kansas Student Journalist of the Year. SM East's student publication The Harbinger kept publishing last year during the pandemic. "When the school district froze grades and so many kids checked out mentally, she led a core group of staff members to not miss a beat," her advisor Dow Tate says. Photo credit Julia Malley.

The Journalism Education Association has named Riley Atkinson, a Shawnee Mission East senior, the 2021 Journalist of the Year.

Atkinson, who began taking journalism courses as a freshman at East, is now a copy editor and online co-editor in chief for The Harbinger, the SM East student newspaper.

After being named the Kansas Student Journalist of the Year in February by the Kansas Scholastic Press Association, Atkinson qualified to compete against about 30 other student journalists for the national award.

While she’s honored to have been nominated for these awards, Atkinson said it’s a testament to her hard work and dedication that she won — especially the JEA title in which Atkinson competed against “the national best.”

“It is just mind blowing still,” Atkinson said. “I’ve been telling everyone who has congratulated me that I’m just in shock. It’s such an amazing honor.”

Despite initial plans to become a doctor of some sort — and focusing on all things science — Atkinson joined The Harbinger’s video staff as a freshman.

Atkinson said the competitive environment motivated her to work harder than she had ever worked before.

Atkinson said she wanted to show her editors and her advisor Dow Tate that she could simultaneously manage her own work and a staff. After climbing her way up through the ranks and putting in the work, Atkinson is in charge of the online staff who she guides on a weekly basis and produces print and online content.

Tate credits Atkinson will keeping The Harbinger fresh and relevant during the early days of the COVID-19 pandemic, when the Shawnee Mission School District — like districts across the metro and country — shut down.

“When the school district froze grades and so many kids checked out mentally, she led a core group of staff members to not miss a beat turning out three 32-page publications and keeping the website fresh with new content that provided some connection to a community splintered by COVID-19,” Tate said in comments published by JEA announcing Atkinson’s award.

While The Harbinger is hard work, Atkinson said she enjoys it — and journalism — because it keeps her busy and the subject matter is ever-changing.

She plans on majoring in advertising and public relations at the University of Arkansas following graduation, and her dream job is to be an advertiser at a magazine or newspaper.

Atkinson said while she’s proud of the awards she won, she couldn’t have done it without The Harbinger team behind her.

“I am so grateful for my advisor and the other editors because without them, I really could not have won those awards or made it as far as I have,” Atkinson said. “They just supported me through all of it.”

Atkinson joins a prestigious line of success at SM East’s journalism program overseen by Tate. In his time advising the program, at least three other students have won JEA’s National High School Journalist of the Year honors.