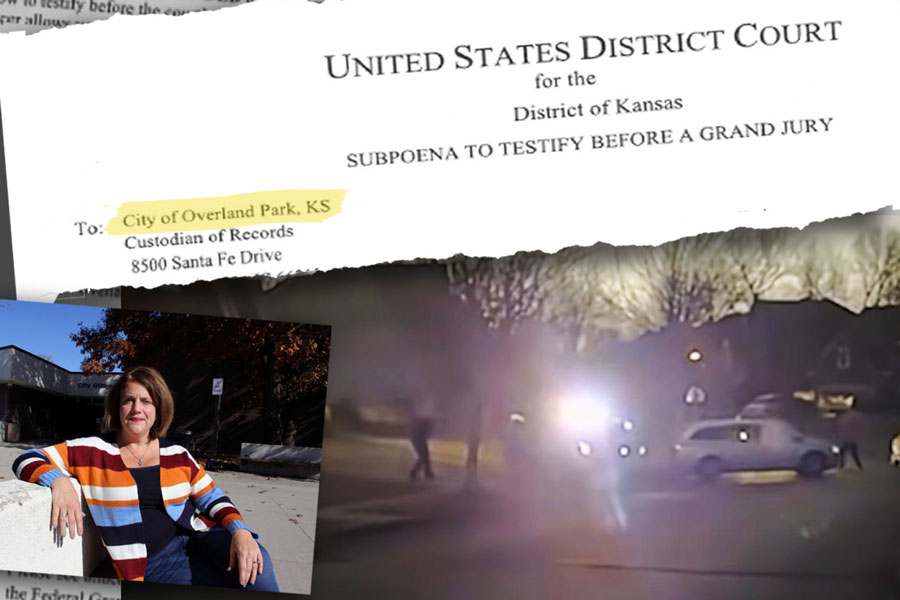 A grand jury subpoena served in Overland Park in November demanded reams of documents and videos connected to the killing of 17-year-old John Albers who was shot by one of the city's police officers in 2018. Photo illustration by Carlos Moreno/KCUR 89.3.

The FBI opened a civil rights investigation last September into the killing of Overland Park teenager John Albers. But new developments reveal more about the information investigators were looking for from the Overland Park Police Department about the officer who shot and killed the 17-year-old teenager in the driveway of his home in 2018.

Through the Kansas Open Records Act, KCUR has obtained the federal grand jury subpoena served on Overland Park in November.

While Overland Park has released some video of the incident, it has not released all of it nor has the department released audio from the body camera worn by former officer Clayton Jenison who fired 13 rounds into the minivan Albers was driving.

But, it now appears the FBI has received all of that information.

“I am just floored that the city has continued to hide that information from the public,” Albers’ mother, Sheila Albers, told KCUR. “They’ve hidden information that is key to the investigation.”

Police were dispatched to the Albers home on Jan. 20, 2018, after receiving a report that Albers, who was alone at home, was suicidal.

Shortly after they arrived, a minivan began backing out of the garage. Jenison fired twice at the vehicle and then, after it made a U-turn, fired 11 more times. Six of the bullets hit Albers, who was driving the vehicle, killing him.

The FBI subpoena required Overland Park to produce the documents and videos by Nov. 18, 2020.

“As always, Overland Park remains committed to fully cooperating with and responsive to the FBI investigation and the related information request submitted through a subpoena,” city spokesman Sean Reilly said in a statement. “Overland Park has responded to all requests for documents.”

As part of the subpoena, Overland Park would have had to disclose details of a severance deal with Jenison that paid him $70,000 to resign from the department.

The entire deal only became public in March after the Kansas City Star sued the city for the document. The city had withheld the terms of Jenison’s resignation from the public and the Albers family.

This sparked a complaint to CPOST by Sheila Albers.

“On two separate occasions, Overland Park Chief Frank Donchez has either verbally or in writing provided false statements in his role as a KS law enforcement officer,” Albers charged in the complaint, which was filed in March.

KCUR has confirmed that CPOST is investigating whether Donchez should keep his law enforcement license. KCUR specifically asked whether Overland Park has been cooperating with CPOST in this probe. In response, city spokesman Reilly said in a statement that, “city officials have been responsive to all requests received from officials at C-POST.”

“By statute, KSCPOST investigations are confidential,” Executive Director Gary Steed said in an email to KCUR. Citing the same statute, Steed refused to say whether CPOST has been served with a federal grand jury subpoena in connection with the FBI civil rights investigation of the killing of Albers.

Eventually, a public hearing by CPOST will be held on Donchez’s license but so far no hearing has been scheduled.

“I do think we will get to the absolute truth,” Albers said. “It’s just so grossly disappointing that it takes this level of effort to get the government to do the right thing. It shouldn’t be this difficult.”