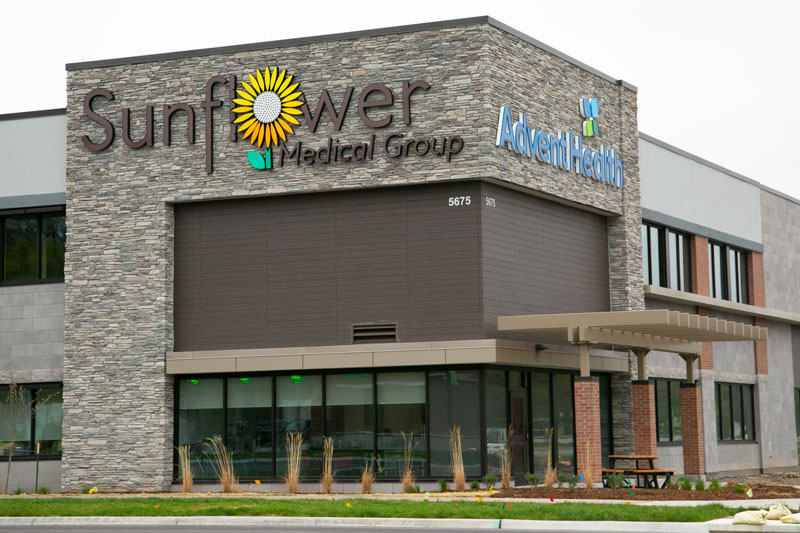 Sunflower Medical Group's office building at the northeast corner of Roe Avenue and Johnson Drive is on track to hit its May 25 construction deadline — and the medical group is already occupying the main level with an urgent care clinic. AdventHealth is set to take over the building's second floor when it is completed. Photo credit Juliana Garcia.

Motorists driving near the confluence or Johnson Drive, Roe Boulevard and Shawnee Mission Parkway may have noticed a new sight in recent weeks.

Sunflower Medical Group, an independent primary care physicians group, is on track to meet its May 25 construction deadline for its new offices at the northeast corner of Johnson Drive and Roe.

The office building — which sits catty corner to the still-unfinished Mission Gateway site — appears to be mostly completed from the outside, but there is still some construction to be done on the second level.

Roeland Park City Administrator Keith Moody said during the April 5 city council meeting that Sunflower Medical Group, or SMG, is occupying the main level of the building at this time.

“The certificate of occupancy for the entire site allows for safety, egress and parking, so all those things that serve the entire building are in place,” Moody said.

SMG’s offices on the first floor offer primary and urgent care services, with no appointments necessary for urgent visits.

Patients as young as 3 can be served there for non-emergency care, including stitches, x-rays and lab tests, according to SMG’s website.

AdventHealth intends to occupy the second floor upon completion of construction, Moody said.

The medical office building has been in the works since July 2019, when Roeland Park agreed to sell the land to SMG Investments.

Roeland Park sold the 2.7 acre site to the medical group for $1.2 million and also reannexed a portion of the site that was in Mission’s city limits.

Once it’s completed, SMG will have a 30,000 square foot, two-story medical office building that acts as an entry point for the city.

SMG is also installing ‘Prairie Rumble’, a piece of public art, at the site later this month.