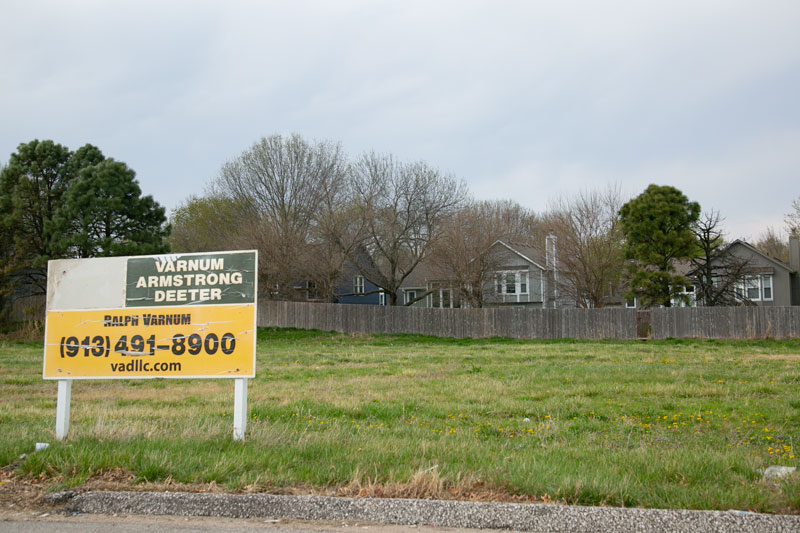 Social Seltzery and Games could be coming to Monticello Center in a vacant lot, above, near the Woodland Park subdivision. The Shawnee Planning Commission sent the owners back to the drawing board for clarification on two points of concern, including parking and setbacks from the residential neighborhood. Photo credit Juliana Garcia.

The Shawnee Planning Commission on Monday evening sent Social Seltzery and Games — a new pickleball court, restaurant and bar concept — back to the drawing board.

Commissioners posed concerns about the plan, which would feature six pickleball courts, a seltzer production area and a restaurant, including potential issues with noise, lighting, parking and property line setbacks.

Located at 2243 W. 66th Street in Monticello Center, near K-7 and Shawnee Mission Parkway, the Seltzery would butt up against the Woodland Park subdivision.

The main concern commissioners brought up was with the site plan calling for a setback exception.

A setback is a minimum distance required for a building to be separated from a road, street or other landmark deemed in need of a buffer. A 33-foot setback is penciled into the Social Seltzery and Games site plan, but a 50-foot setback is required by city code.

Between the Social Seltzery property and Woodland Park is a 30-foot tract owned by the subdivision that was intended to act as a buffer for commercial development.

Madison and Patrick Daly, who would be the owners and operators of the space, live in Woodland Park and said their neighbors are excited about the possible addition of Social Seltzery and Games.

“The general consensus in Woodland Park was people were very excited to have a venue like this close in proximity and in western Shawnee and western Johnson County in general,” Madison said.

To address commissioners’ concerns about lighting and noise issues, the Dalys said they would be comfortable closing sports courts at 10 p.m. each night.

Interior activities such as the bar and restaurant would remain open until midnight, the same time another nearby bar, Tanner’s Bar and Grill, at Monticello Center closes.

Peterson said she was concerned that if parking near Tanner’s and other nearby tenants filled up, those wanting to patronize Social Seltzery would need to walk nearly a quarter of a mile to get there.

‘Not going to be a perfect property’

While some commissioners were still unsure about the project, others like Commissioner Leo Nunnik were more concerned about the inability to find the perfect property for such a concept.

Nunnik said many of the issues posed at Monday’s meeting had been addressed, and his concern was “there’s not going to be a perfect property.”

“This is what we’re hearing from residents all the time, this is what we need,” Nunnik said. “If you wait for the appropriate property to come along, we’re probably going to be waiting a long time.”

After an hour-long discussion, the planning commission unanimously tabled making a decision on Social Seltzery and asked the owners to come back with clarification on two main items that caused concern: the setback issue and parking.