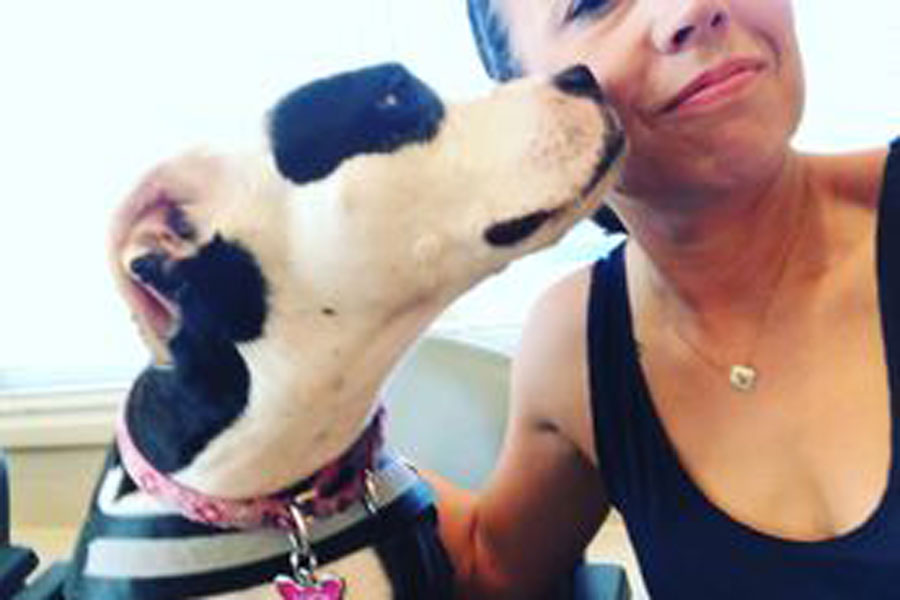 Leawood resident Kristi Bond had to move her dog Lucy, above, to another city after officials told her Lucy violated Leawood's ban on pit bulls. When the Bonds adopted Lucy, they were told she was a boxer mix, but Leawood's pit bull ban covers dogs that resemble pit bulls, which critics argue can be a vague designation. Image courtesy Kristi Bond.

The kids were at home when animal control and police arrived at Kristi Bond’s Leawood residence two years ago.

The order was direct and to the point. The family would have to remove Lucy, the Bonds’ dog especially beloved by their 10-year-old daughter, from the city.

Had Bond lived in just about any other city in the metro area, Lucy’s looks wouldn’t have been an issue.

One by one, other municipalities have dropped laws that target pit bulls – a catch-all term for breeds that look a certain way – with restrictions or outright bans. Leawood and Overland Park are the last major cities holding on to such breed-specific ordinances.

But that could soon change. This year, Overland Park officials are considering whether to get rid of theirs.

Residents are being asked to voice their feelings about the city’s pit bull ban in a biennial citizen survey and in emails to their city council representatives.

There are plans for a panel discussion and an in-person public hearing later this year, and there has already been a virtual town hall with two councilmembers, which ended with a request for a moratorium on enforcement of the current ban.

Councilmember Paul Lyons expects a big turnout at the future events, if past discussions are any predictor.

“It’s a very emotional issue on both sides. People are very passionate about their points of view.”

Pit bulls began to get their bad reputation in the 1980s and ‘90s, during a time of national concern about illegal drugs and dog fighting. By the mid 2000s, pit bulls had become firmly associated in the public mind with the U.S.’s drug subculture.

Overland Park’s first restriction on pit bulls was passed in 1987, when they were declared dangerous animals. They were still allowed in the city, but owners were required to carry a $300,000 insurance policy and to keep them on a leash and muzzled when out in public.

That ordinance was challenged and made it all the way to the Kansas Supreme Court, which ruled in 1989 that the law was reasonable.

Some well-publicized attacks in 2006 pushed the city over the edge into an outright ban on pit bulls.

That was the year a child was killed by a pit bull in San Francisco. Kansas City, Kan. also saw a fatality that year, when 71-year-old Jimmie Mae McConnell was mauled in her yard by a dog that had jumped the fence.

Overland Park and Leawood weren’t the only cities to ban pit bulls.

Leawood does not currently have any discussion on its ban scheduled. Overland Park has never seriously considered it before now, Lyons said.

The last time it was discussed was in 2013, when a council committee considered whether to require DNA instead of visual 10-point checklist as evidence of the breed.

That hearing drew at least 100 people, he said, who testified for hours. At the conclusion, the committee did not make any change.

Since then, pit bull owners and professional organizations have worked to correct what they consider unfair stereotypes about the breed.

Some, like the American Kennel Club, the Centers for Disease Control and the American Veterinary Medical Association, have come out against breed-specific restrictions.

Dog owners like Bond have made their case, too, oftentimes in court. Bond is appealing her municipal court conviction for keeping a dangerous animal.

Lucy was a survivor of parvovirus, a potentially deadly contagion that attacks dogs’ gastrointestinal system, and she was small for her age when the Bonds adopted her.

The family took pains to socialize her and she never had any aggressive incidents. She came to the attention of animal control officers after she got loose and was found a couple of houses away, she said.

The family adopted Lucy when they lived in Kansas City, Mo., and were told by a vet that she was a boxer mix. They did not know there would be a problem in moving to Leawood, Bond said.

“It never crossed my mind because I’ve never thought of Lucy as anything other than a mutt, a boxer,” she said.

They considered moving away from Leawood last year, but the pandemic made the logistics of selling their home difficult, she said. While the case is in court, Lucy is relocated to another city, where she can still be visited.

But the ordeal has been difficult financially – Bond has a GoFundMe page for legal expenses — and emotionally for her kids.

Bond’s daughter Esmae, who is now 12, still has a strong bond with Lucy. The city is asking the family to get rid of a family member, Bond said.

“She’s done absolutely nothing wrong except just look a certain way to one person in animal control,” she said.

Arguments against a ban

The Great Plains SPCA in Merriam serves as an animal shelter for Overland Park. Officials at the organization argue against breed-specific restrictions on pets.

Based on their visual checklist, a dog could be ruled off-limits for adoption into the city, meaning that it wouldn’t be shown to prospective adopters, said Tam Singer, Great Plains CEO.

That isn’t much help for pet owners who move into Overland Park, though.

A Great Plains staff member argued against the ban in Prairie Village, which was lifted in February 2020, and the same staffer is set to participate in the panel discussion when Overland Park considers it, Singer said.

Singer and other animal rescue experts say there’s no data to back up the assertion that pit bulls are any more likely to be aggressive than other dogs. A lot of things people believe about pit bulls, like the tenacious locking jaw, are myths, she said.

What really matters is how an animal is trained, Singer said. Cities that want to keep people safe should focus on responsible owners encouraging neutering of male dogs and enforcing leash laws and bans on dog fighting, she said.

Singer said pit bull bans can lead to a false sense of security.

For example, she said the shelter once housed a golden retriever-Pyrenees mix that was big and well-loved by staff. He would have been allowed into any city but the shelter’s behaviorists decided he was too aggressive to be adopted. Instead he was euthanized to protect the public, she said.

Great Plains is a no-kill shelter but will euthanize animals for health issues or aggression. Last year, the shelter put five dogs to death based on their behavior, Singer said. None were pit bulls.

Reder was one of two experts who spoke at a virtual discussion on breed restrictions hosted by Overland Park councilmembers Faris Farassati and Scott Hamblin. Because of media attention in the past, people now unfairly associate pit bulls with lower socio-economic groups of people, she said.

Another difficulty is that the pit bull designation is vague.

Reder said the average person cannot correctly tell what’s in a mixed breed dog. Many cities define a pit bull as a dog with characteristics of Staffordshire bull terriers and American Pit Bull Terriers, but it’s all done visually.

Even if a DNA test says those bloodlines aren’t present, some judges have still stood by convictions, Reder said.

So far, Lyons says he has received more than 200 emails asking for Overland Park’s pit bull ban to be rescinded and roughly 60 arguing to keep it.

He hopes to have a better idea of where residents stand after the survey, which only goes out to Overland Park residents.

Lyons and fellow councilmember Holly Grummert started working on the idea soon after Prairie Village lifted its ban last year. But they put things on hold during the pandemic because they wanted to give people the chance to make their arguments in person, Lyons said.

“We knew it would be an emotional topic,” he said.

For their part, Farassati and Hamblin say the council’s deliberations are going too slowly.

With the panel discussion scheduled for May 11 and the public hearing June 9, followed by a period for staff to craft changes, a vote by the council likely won’t happen until the fall, Lyons said.

Farassati called that “convoluted and over-procedural,” adding that there’s no scientific basis for the ban.

Farassati and Hamblin asked for a discussion at a recent council committee meeting but were denied because the larger effort at gathering public input was already in progress.

“There is no reason government has to move at a snail’s pace,” Farassati said.

Farassati and Hamblin are pushing for a stop to the visual identification and impoundment of pit bulls while the change is under consideration.

Singer with Great Plains SPCA noted that different dog breeds have been labeled as vicious throughout history.

“Pit bulls were America’s dogs in World War I and World War II, then bloodhounds were the dangerous dogs,” she said.

After that, German shepherds, Dobermans and Rottweilers all went through phases as the focus of public panic and ridicule. But nothing about the breeds makes them any more of a risk, she said.

“If you ban this dog, doesn’t another dog just become it?”