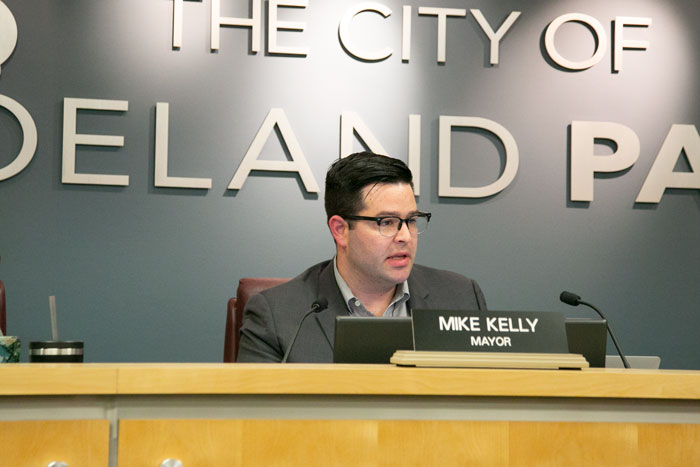 Kelly was originally elected to office in November 2017, and recently filed for re-election.

He  told the Shawnee Mission Post he is running for re-election to see projects the city that have started in his first term come to fruition.

Since 2017, the city has seen several changes such as the Roe 2020 renovation along Roe Boulevard. Kelly said he’s excited to see what the next four years will bring to Roeland Park.

“What we’ve accomplished in Roeland Park these past four years has been remarkable,” Kelly said. “From Roe 2020’s renovation of our city’s primary roadway, to R Park’s phased development, the major improvements to the Roeland Park Aquatic Center, and welcoming new businesses like Sunflower Medical and AdventHealth, the city is in a better position that it was four years ago.”

Kelly currently works as a lawyer for Husch Blackwell. Prior to being elected mayor, he served as chair of the Roeland Park Sustainability Committee and the Community Foundation Advisory Board.

He is a graduate of Rockhurst High School, Kansas State University and the University of Kansas School of Law. He’s lived in Roeland Park since 2014 with his wife Elizabeth. Their daughter Virginia was born in 2017, and their son George was born in August 2020.

Kelly says some of his priorities for the upcoming campaign include business development and infrastructure improvements.

Kelly said he also wants to continue to maximize the quality of life citywide. Kelly said he’s eager to work to see the “community-led vision recognized in Roeland Park’s future.”

At this time, Kelly is the sole candidate who has filed for mayor, according to filing reports on the Johnson County Election Office website.

“There’s value in continuity in government — and even though I’ve only been mayor for four years, I’m the longest tenured governing body official in our city,” Kelly said. “Another term enables Roeland Park to keep our momentum forward.”