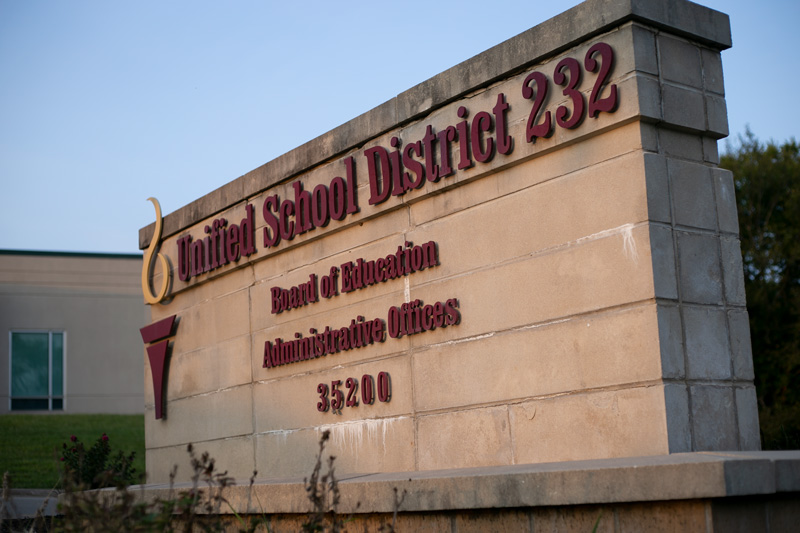 The USD 232 Board of Education on Monday unanimously denied some patrons' request that the district's requirement that masks be worn in all its buildings be canceled. The board also approved a process to hear future complaints, which can be filed under a new state law. File photo.

The USD 232 Board of Education on Monday voted unanimously to keep a policy in place requiring masks be worn inside district buildings.

The vote came after the district, which covers DeSoto and areas of western Lenexa and Shawnee, received several patrons’ complaints last week about the mask requirement, which were filed under a new state law allowing such challenges to local school districts’ COVID-19 policies to be heard.

“Every public health organization with jurisdiction in this area (CDC, KDHE, JCDHE) recommends that masks be required at school,” Superintendent Frank Harwood said in a presentation to the board before the vote, referring to the state and county health departments along with the federal Centers for Disease Control and Prevention.

“Requiring masks is narrowly tailored to reduce the risk of inhaling the respiratory droplets of others which is the primary means of contracting COVID-19,” Harwood added.

The board technically voted on the recommendation made by two district staffers who presided over a hearing last week that was called in response to the complaints about USD 232’s mask policy.

No member of the public attended the hearing, which by the new law known as Senate Bill 40 was required to be called within 72 hours of the district receiving a complaint.

The district says it received five complaints about the mask policy last Monday. Three people withdrew their complaints. The other two did not show up to Wednesday’s hearing.

“We took that action to be abandoning their request for a change to board policy,” said Brian Schwanz, one of the two staff members who presided over last week’s hearing, as he made his recommendation to the board Monday.

Schwanz also argued — a point made by other district officials Monday — that since the district’s mask policy was first instituted last summer, it does not fall under the dictates of the new state law allowing for patrons to challenge new COVID-19 policies.

A process to hear future complaints

Under the protocol approved unanimously by the board Monday:

Other Johnson County school districts are dealing with similar complaints regarding their COVID-19 policies.

On Tuesday morning, the Blue Valley School District was set to host its own hearing under Senate Bill 40’s provisions following complaints it had received about its mask policy.

Prior to Tuesday, Blue Valley posted some rules and protocols for its Senate Bill 40 hearings online.

According to TV station KSHB, the Olathe School District was also set to hear complaints regarding its mask-wearing requirement.

The only major northern Johnson County school district to say it has yet to receive any complaints regarding its COVID-19 policies is Shawnee Mission.

A district spokesperson on Tuesday told the Shawnee Mission Post in an email, “If we receive a complaint, we will respond in accordance with the requirements of SB 40.”