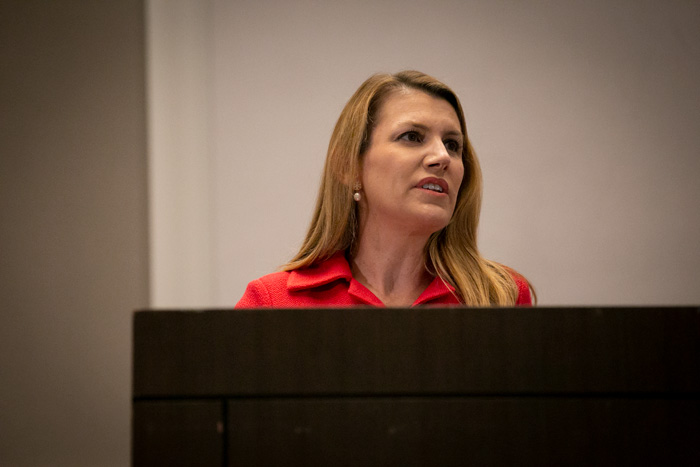 Former Cerner executive and one-time chair of the Kansas Republican Party Amanda Adkins says she is running for Congress again in 2022. That sets up a rematch with Democratic Rep. Sharice Davids, who beat Adkins by 10% in 2020. File photo.

Amanda Adkins says she is running for Congress again, setting up a potential rematch with the woman who beat her this past November, Democratic Rep. Sharice Davids in Kansas’ 3rd U.S. House District.

Adkins, a former chair of the Kansas Republican Party and a one-time official in Gov. Sam Brownback’s administration, lost to Davids in 2020 by about 10%.

She made her announcement on Twitter Monday, which did not feature the candidate herself but instead saw former Kansas Congressman and U.S. Secretary of State Mike Pompeo and his wife, Susan, endorsing Adkins.

Today I launch my campaign to take back #KS03. My time as a leader in business innovation with deep healthcare experience is more important than ever. Thanks to @mikepompeo and his wife Susan for supporting me. You can see the video here or YouTube. More to come … pic.twitter.com/dHHAh2Tgcg

“I know a leader when I see one, and that is why I’m supporting Amanda Adkins for Congress,” Pompeo, who many prognosticators believe is a likely 2024 Republican candidate for president, says in the video.

“Rep. Davids’ sole focus is on getting the coronavirus under control and our economy back up and running again. That’s why she voted for the American Rescue Plan, which is already helping to put vaccines into arms, money into pockets, people back to work, and keep kids safely in the classroom.”

Davids is touring through the 3rd District this week, including stops at a vaccination site in Wyandotte County and a closed-door visit with incoming Shawnee Mission superintendent Michelle Hubbard.

Adkins made hints after November’s defeat to Davids that she would potentially run again.

She stepped down from her position as an executive at health care IT giant Cerner earlier this year.

In comments Monday to the Kansas City Star, Adkins said she was heartened that she outperformed U.S. Sen. Roger Marshall and President Trump in Kansas’ 3rd District, which includes Johnson and Wyandotte counties and a sliver of Miami County.

“It’s an opportunity for me to run against a Biden agenda, and clearly, from the perspective of a lot of people here in the third, President Biden is overreaching fairly significantly and Sharice Davids is supporting him,” Adkins told the Star.

Davids has won the 3rd District both times she’s run by double-digit margins — defeating incumbent Republican Rep. Kevin Yoder in 2018 — but the district’s current geography could be in play heading into 2022.

Last year, outgoing Kansas Senate President Susan Wagle said in recorded comments at a meeting of Republicans that the GOP wanted to redraw the state’s Congressional map after the 2020 U.S. Census to favor conservatives in the increasingly blue 3rd District.

After November’s elections, Republicans control super-majorities in both chambers of the Kansas Legislature and could potentially override Democratic Gov. Laura Kelly’s veto of any redistricting plan put forward by lawmakers.