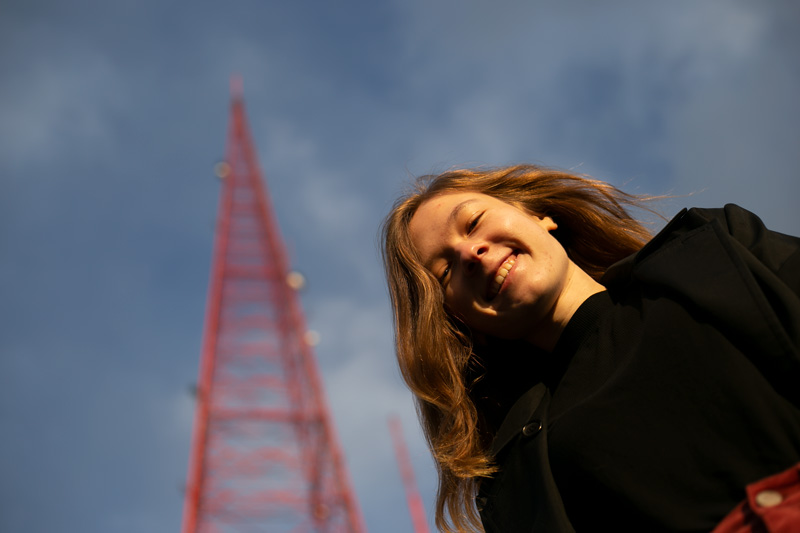 Skylar Rochelle dabbles in all things in the music world. A 2019 SM East grad, she hosts The Z-Show on The Bridge 90.9 from 8 to 10 p.m. every Saturday. Exercising her creative license, she focuses the radio show on music discovery — introducing listeners to newer or often unheard music — and deep cuts — or playing “weird songs,” as she would put it.

Rochelle also works for Manor Records, a local record label that’s a member of Deep Space, a music cooperative in Kansas City, Missouri. And right now, she’s an intern for Keeled Scales, a record label based in Austin, Texas. When she has time, she writes music reviews for Melted Magazine, a publication in Washington, D.C.

Outside of music, Rochelle enjoys checking out local coffee shops (her recommendations for a productive work environment are Monarch and Messenger; and for a cozy spot, Mud Pie. She lives in Westwood with her mother, Ashley Rochelle, and their two cats, Iris and Lionel.

First of all, I don’t think I’ll ever get used to hearing my voice on air. I still think it’s wild. The first time my show was on, I was like, whoa, hang on, what? People are hearing this? It’s crazy. It’s weird to think about.

I want to say that this is truly like a dream gig at The Bridge. It’s just good people, good music. It’s truly the best spot. The team at The Bridge, they’re really great, A) for taking me in like they did, kind of — and I’ll get to that — and having me join the team, and B) their love and true appreciation for music and this city and the local music here, which is super important.

And they work so hard, it’s insane. They’re doing some really good stuff, and I’m just super happy and lucky to be a part of a team like that.

I originally got started at The Bridge my senior year of high school at the beginning. I did a little interning with them, just some very basic data entry, and then I was walking down the hallway one day, and Bryan Truta was talking to someone else who I was walking with, and he mentioned they were looking for a new host of the show, and I was like hey, I’m interested. And this was probably August, September, of 2018.

A few weeks or a month later — I’m actually kind of hazy on the timing, but soon after — Bryan reached out via email and wanted to set up a meeting. And our visions just kind of aligned. We had a couple meetings as far as how I wanted the show to be and how he wanted the show to be, and I made some mock-up playlists, and he really dug those.

For the first show, it was really sweet ‘cause he took me into a very small studio where they do all the voice tracking and stuff. It was really fun ‘cause he coached me a little bit on how to do the radio voice and speak and all that stuff. And then from there, it just kind of took off.

I used to be able to go into the station to do that kind of thing every week before COVID, and before leaving for college as well.

First off, I love listening to music. I’ve always just been down to make playlists and things like that. I used to make cassette tapes, mix tapes, prior to getting this gig. To be able to go down a bunch of different rabbit holes and find new music is really something that appeals to me.

An example is Horsegirl. This actually happened recently, like a few months ago. They’re this new band out of Chicago, super young, all fem, non-cis men, and I found them one day, and a couple months later, they had been picked up by major publications like Pitchfork and Sub Pop and things like that.

We actually had one of the members’ dads email The Bridge and ask for a specific section of the show where I played them. And he was like hey, I would really like this section of the show and also I just want to let you know that you’re like one of the first people to ever pick them up. Thank you for that. All that stuff, which felt really cool.

Just to be able to play new music and also music that isn’t necessarily heard all the time, I think, is really awesome. I just really like to be a platform for local music. I think that’s so important, especially with the local scene here in Kansas City. We have such a great community of local artists that really deserve so many listens.

We at The Bridge try to provide a platform for local artists, and we do interviews and things like that. Just giving them a voice is super cool, and just supporting them is important to make them feel like we see you and hear you and appreciate the music that you are giving us. And I love interviewing them and being able to talk to them, especially in a time of no shows, because it’s good to check in.

I do try to stick with newer music and things that aren’t played in the Top 40s or anywhere else really, one because I really enjoy finding that kind of stuff and being like whoa, I get to share this with other people? That’s so wonderful to me. Just finding it, sharing it and being able to talk about it ‘cause I’m a nerd like that. It’s a very great outlet for me to get that out of my system (laughs), so my friends don’t get a bunch of texts like hey, listen to this.

And also just to be able to talk to artists, local artists and national and regional folks as well, I think that’s super cool. A dream come true, for sure.

Music, absolutely, the number one thing it does is bring people together. And I think the really beautiful thing about that is it can bring people together in times of isolation. ‘Because when you hear a song and you relate to it, it’s like wow, I feel seen and heard without actually being seen and heard, but you still are able to find community in music, always, despite not being able to actually go to shows.

And I feel like it also helps facilitate emotional releases as well, or escapism, either or, you can go either way, depending on what you want to do, which is really nice, especially in times like this, ‘cause I feel like you need a little bit of both.