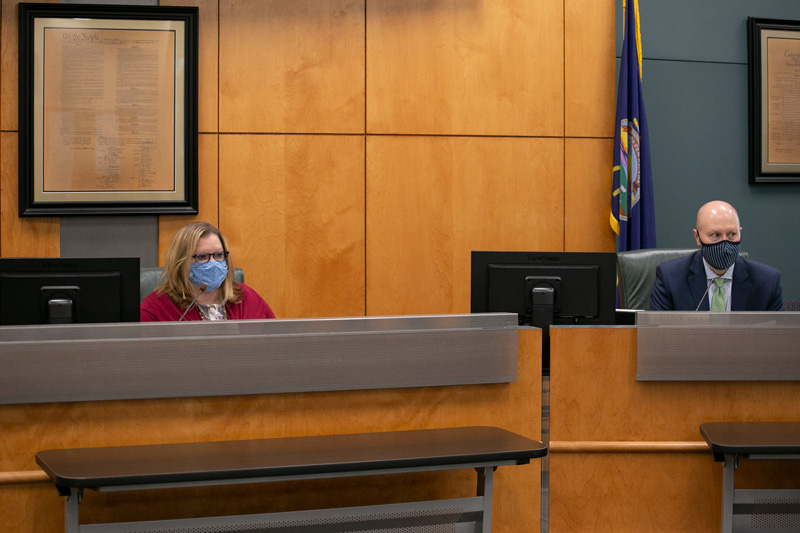 A new Kansas law that aims to limit the governor’s and other officials’ emergency powers during the COVID-19 pandemic is already having an impact on at least one Johnson County school district.

USD 232 in De Soto appears to be the first Johnson County district to host such a mandated public hearing, less than a week after the law went into effect.

District staff conducted the hearing Wednesday morning in response to emailed complaints from five individuals who said they wanted the district to stop requiring that masks be worn inside school buildings.

Here is the text of one email:

“I am emailing you today in regards to SB40 that Governor Kelly signed on March 24, 2021 and went into effect March 25, 2021. This law takes away the authority to mandate masks in school from the local health department, the Governor and the county commissioners and gives full authority to the board of education. I am emailing you to ask the school board to use their new authority to stop mandating masks in schools when the kids come back from spring break. If the school board is continuing to mandate masks in school, I would like to request a hearing with the board of education.”

Click here to see copies of all five emails the district received, which have been redacted to shield the names of the senders.

USD 232’s mask requirement is part of the school district’s Coming Back Together plan, which went into effect on July 13, 2020.

Alvie Cater, district spokesperson, said three of the five individuals withdrew their requests before the hearing could be held. The other two did not show up Wednesday morning.

The only person from the public that was present for the hearing was a reporter for the Shawnee Mission Post.

No members from the USD 232 Board of Education attended because, Cater said,  the district lacked enough time to give notice for a meeting, as is required by Kansas’ open meetings statute.

The USD 232 Board of Education will discuss on Monday, April 5, possibly establishing emergency procedures to quickly convene hearings in the future to accommodate the new emergency powers law.

Cater said he believes the USD 232 school board has tried to do “the very best for students and staff” by being as least restrictive as possible in its implementation of COVID-19 limits.

USD 232 was one of the first school districts locally to bring all students back to in-person learning when it did so in January.

“Individuals have expressed their concerns and opinions and emotions regarding decisions the board was considering and decisions the board made, and I do think that process worked,” Cater said. “Unfortunately, when a decision is made, not everyone is going to be happy, but the decision was made to do the very best for our kids and our staff.

“This is a challenging time but I do believe there is light at the end of this tunnel. We are almost there if we can just continue to work together, we can certainly look to a brighter day when the new school year starts,” Cater added.

What the new law says

Senate Bill 40 is about much more than just the actions of local school boards.

Its most notable provisions pertain to the governor’s powers to issue executive orders during an emergency, like the COVID-19 pandemic.

Republican legislative leaders have said they’ll use the law to overturn any extension of a statewide mask mandate, but Kelly has also vowed to issue a new order.

The new law also impacts school districts by requiring schools to employ the “least restrictive means possible” to achieve a safe learning environment during the rest of this current school year.

Under the law, an “employee, a student or the parent or guardian of a student ” can file a grievance and request a public hearing regarding a district’s policies in response to the COVID-19 pandemic.

That could include things like requirements that masks be worn inside school buildings at all times.

The law requires districts to hold a hearing within 72 hours of receiving such a complaint. The law also allows people to sue school districts within 30 days of an emergency policy being enacted.

Cater said USD 232 staff is still working through interpretation of the new law to ensure the district is in full compliance.

However, out of their “best effort” to ensure compliance, the district coordinated the Wednesday hearing in order to meet the law’s requirement that the hearing occur within 72 hours of receiving complaints.

Again, no member of the public attended Wednesday’s hearing and no discussion about district policy was conducted.

School officials and educators are still trying to interpret the full import of the new law.

The Kansas Association of School Boards says there is some ambiguity in the language of the law, which currently expires May 28.

It says, in part:

“The statute does not make clear whether a student, employee, or parent or guardian of an aggrieved student may request a hearing only when the board enacts a new COVID-related rule or policy, or whether complaints may also be filed concerning long-standing policies and procedures, such as those adopted in school reopening plans in the Fall of 2020.”

For instance, USD 232’s mask policy — which was the focus of the five complaints the district received this week, prompting Wednesday’s hearing — was enacted last summer.

It’s not clear if that policy would fall under this new law as a policy that can be challenged or if the law only applies to new policies enacted or approved going forward.

As of Wednesday, a spokesperson with the Shawnee Mission School District said that district has received no requests for a hearing, nor set any date for a hearing.

A spokesperson with the Blue Valley School District said it had received a complaint and its first hearing under the new law is set for Tuesday, April 6.

The Post has also reached out to the Olathe, Gardner Edgerton and Spring Hill school districts and we will update this story when we receive their responses.