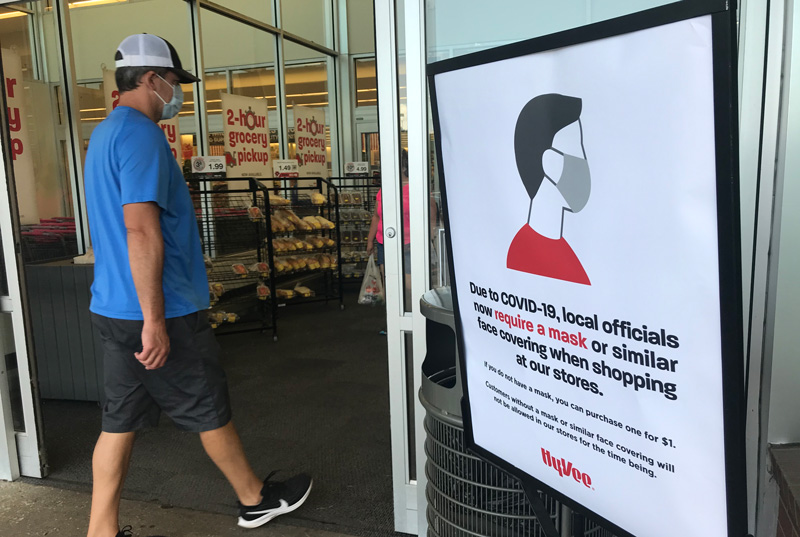 Here’s why: Under a new law signed by Kelly last week, Senate Bill 40, the governor has the power to extend statewide emergency declarations through May, but it also gives lawmakers the power to overturn such orders as they’re issued.

The law also allows local county governments to issue their own mask orders and public health directives and allows counties to opt out of the governor’s orders.

What’s in place in Johnson County: The county’s public health order, which passed the commission by a 5-2 vote last Thursday, requires masks be worn in public places.

The order expires April 30, though commissioners voiced optimism the mandate could be rescinded before that if vaccinations in the county continue to increase.

Johnson County’s new public health order does not mention capacity limits or curfews for restaurants or other businesses.

It does still require six feet of physical distance in public settings, with many exceptions and exemptions depending on the type of business or activity.

The potential for legal challenges: Senate Bill 40, the same law that granted lawmakers the power to overturn the governor’s executive orders, also puts some restrictions on local officials’ health mandates.

The law allows for citizens “aggrieved” by a local health order or policy to challenge it in court, and the law sets guidelines for courts to overturn such orders.

Such legal challenges must be handled quickly, within 72 hours of being filed.

So far, the county is not aware of any civil suits filed in Johnson County District Court challenging the current health order, according to Cynthia Dunham, the deputy director of the Johnson County Legal Department.

Dunham says aggrieved parties, under Senate Bill 40, have up to 30 days from the issuance of the order to file a challenge, but she suggests such suits won’t have merit.

“Johnson County’s local health order was proposed and approved in compliance with Senate Bill 40,” Dunham said in an email to the Shawnee Mission Post.

None of the complainants appeared at the hearing and no further steps by the district were taken.

Blue Valley Schools has also scheduled a hearing for Tuesday, April 6, following a complaint about that district’s mask policy.

Editor’s Note: This story has been updated to include comments from Johnson County’s deputy legal director Cynthia Dunham.