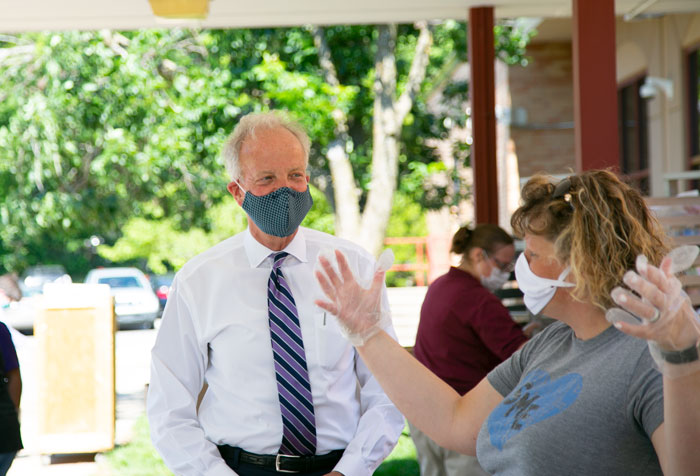 All members of the Kansas delegation of U.S. Congress — except for Congressman Ron Estes — have reported or made known that they have gotten their COVID-19 shots. Above, file photo of Sen. Jerry Moran.

All Kansas delegates in Congress but Rep. Ron Estes say they got COVID-19 vaccine

All members of the Kansas delegation of U.S. Congress are known to have gotten their COVID-19 shots — except for Republican Congressman Ron Estes, whose vaccination status remains publicly unknown.

The report comes the Kansas Reflector, which reported that members of Congress were among the first people in the U.S. to have access to the COVID-19 vaccine when initial doses became available in December 2020.

The report is the result of a States Newsroom survey across 22 states, which found at least 155 members of the U.S. House and Senate have been vaccinated. [Special Report: Dozens of members of Congress are vaccinated against COVID-19, but some still hesitate — Kansas Reflector]

The Shawnee City Council is moving forward with piloting a new farmers market program. The proposed Moonlight Market concept will be an evening event on the third Thursday of every month from May through October.

The city council on March 22 unanimously agreed to suspend the city policy governing the farmers market. Councilmember Eric Jenkins also expressed his support for extending the hours of the farmers market later into the evening. The current proposed hours for the monthly market are 4 to 8 p.m. on Thursdays.

The city may continue its weekly Saturday morning farmers market, depending on vendors’ interest, according to city documents.

The city of Merriam is hosting an open house public meeting regarding sidewalk and street improvements on April 1.

Residents and others can offer the city input on sidewalk improvements on W. 60th Street, W. 60th Terrace, W. 61st Street and Knox Avenue. Street improvements are currently planned for the following: