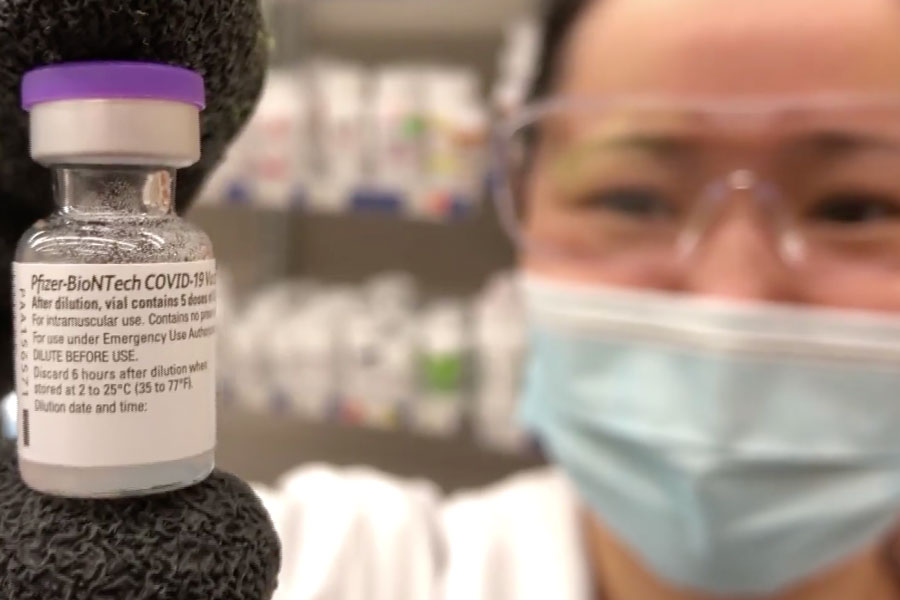 Some vaccine hunters locally and in other parts of the U.S. have complained that getting their second dose at Walgreens pharmacies has been hard if they got a "leftover" vaccine and did not sign up for their first appointment. Image courtesy Walgreeens.

Johnson County residents on the hunt for a COVID-19 vaccine may encounter complications if they get their first dose at a local Walgreens pharmacy.

That is, if they “luck into” a leftover dose like Stephanie Hanaway of Olathe did recently.

Hanaway wasn’t planning on getting vaccinated last Friday when she drove her sister, a Lenexa resident, to a Walgreens in Leavenworth for her vaccine appointment.

But when they got there, Hanaway says, they asked if Hanaway might be able to get a dose, too. The technician said she could add her name to a waiting list and check back later that day to see if there were any doses leftover.

“We hung around Leavenworth until 4 [that day] and when we returned, they indeed had an extra shot for me,” Hanaway told the Shawnee Mission Post via email.

It’s the kind of serendipitous, as-luck-may-have-it kind of vaccine story many Johnson Countians are probably familiar with at this point, but there was a catch. Hanaway wasn’t able to schedule a second shot.

“They were so nice and friendly, and worked really hard to schedule my second shot, due in mid April in their system, but to no avail,” Hanaway said.

It seemed because she had not set up a first-dose appointment online, the staff at the Walgreens was not able to book Hanaway a second appointment.

She noted that her sister, who had booked an appointment with Walgreens online, had no trouble scheduling her second shot.

“So it will be back to ‘The Hunger Games’ for trying to secure my second dose,” Hanaway said.

This is not the only Walgreens where this particular issue has been reported happening.

In Milwaukee, Wis., vaccine hunters there ran into the same issue with scheduling a second appointment after finding a leftover vaccine at a Walgreens there.

In a statement to the Post, a Walgreens spokesperson said the following:

We are committed to honoring all appointments and providing second doses to all patients, regardless of where their first dose was administered. In addition to the online scheduler, second dose vaccine appointments can be made by calling 1-800-Walgreens, in-store and by calling your local Walgreens. For those patients who received their first dose with Walgreens, if they haven’t received their second dose, we will be reaching out to ensure that they have scheduled an appointment and are vaccinated.

Hanaway says she has tried that without success.

“I went online to the Walgreens web site to search for appointments at the Walgreens in Leavenworth, and none are available. I tried several other locations…same story,” she said.

She also tried calling Walgreens 1-800 help line but said an agent explained to her that no second-shot appointments were currently available and that appointments made online could only be booked up to 5 days in advance.

“They said I’d just have to wait until 5 days before my second dose is due and try to secure an appointment then. The customer service agent acknowledged that no priority is given for 2nd doses. It’s all first-come, first-served,” Hanaway said.

The scramble for vaccines comes as all Kansans 16 and older are now eligible to get vaccinated.

County health officials have emphasized that you have 42 days after your first dose to receive your second dose. Many clinics — including those operated by the county, local hospitals and pharmacies — are automatically scheduling residents’ second-dose appointments for between 21 and 28 days after their first.

But those who may stumble into getting a vaccine like Hanaway did could find those procedures could be different for them.

County epidemiologist Elizabeth Holzschuh says that even if you don’t get your second dose within the recommended 42-day window, it won’t necessarily impact your immune response.

Both Pfizer and Moderna vaccines have been shown to have more than 90% efficacy at defending against COVID-19 after just the first dose.

It’s better to get the second dose late than to not get it at all, Holzschuh says.

Johnson County’s weekly allotment of vaccines has been increasing in recent weeks, but supply remains well short of demand.

However, doses that Walgreens gives out come directly through the Federal Retail Pharmacy Program and are separate from the county’s supply that it uses for its own clinics and sends to local hospitals for distribution.

Supplies of vaccines at local retail pharmacies have been limited. Here is how you can check with each retail chain serving Johnson County and the Kansas City region: