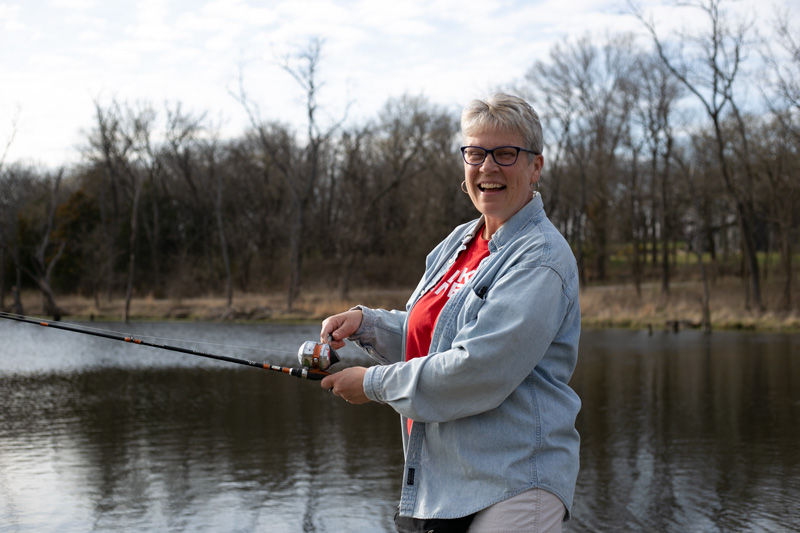 Councilmember Mandy Stuke has decided not to run for re-election to the Lenexa City Council. But she'll still be around, perhaps fishing at Mize Lake, one of her favorite spots.

After 18 years in Lenexa city government, Councilmember Mandy Stuke has decided not to run for re-election.

Stuke was appointed to the Lenexa City Council in 2011, representing Ward 4. Prior to that, she served on the city’s planning commission for seven years. She said her decision not to run is “very personal,” and it is the right time.

“It has been an honor of a lifetime to serve the citizens of my hometown, Lenexa, a city that I truly love and adore,” she said. “I’m just so proud that we have the community that we do, I just don’t even know how to put that into words.

“It’s just so many things: parks and festivals, activities and things to do. That’s probably one of the best things, is when you hear people talk about how they love it here and there’s no other place like this,” she added.

Craig Denny has filed his candidacy for the Ward 4 seat being vacated by Stuke. The general election is Nov. 2.

Stuke and Denny co-chaired the Vision 2030 process, which led to new plans for the city’s Complete Streets initiative aimed at building ore walking and biking connections in residential areas, as well as age-inclusive plans for parks and recreation.

Besides Vision 2030, Stuke said she is also proud to have been part of the Lenexa Planning Commission when it set the design guidelines for the development of Lenexa City Center at West 87th Street Parkway.

She sees city center was “everything and more” than what everyone hoped could happen for the once-rural area that has since grown into new development.

Raised in Lenexa by Tom and Kay Plaster, Stuke grew up in Four Colonies near 83rd and Quivira and attended Shawnee Mission Northwest High School.

During her senior year, she attended a city meeting for her government class, during which then-Mayor Rich Becker had rolled out plans to redo the layout of Santa Fe Trail Drive in Old Town.

Stuke had a career in insurance before she started her new gig working for Food Cycle KC, a new composting company in Shawnee.

She lives near Old Town with her husband, Jay, and their two dogs, Lily and Cooper. They have two grown children, Abby and Skyler.

Her mother served on the Lenexa Arts Council, and her daughter works for the Lenexa Chamber of Commerce.

Above all, she thanks city leaders and staff for their efforts to make Lenexa what it has become today, as well as all of the residents’ input over several years of visioning and collaboration, she says.

“This is the voice of the citizens that made this happen,” Stuke said of Lenexa City Center and other city efforts. “This isn’t me, this isn’t any one person. And I cannot tell you how many times I have tried to explain to people that your voice matters. Rich Becker taught that back to me in ‘87.”

Lenexans will still see Stuke around town, she says, perhaps fishing or enjoying nature in one of the city parks.