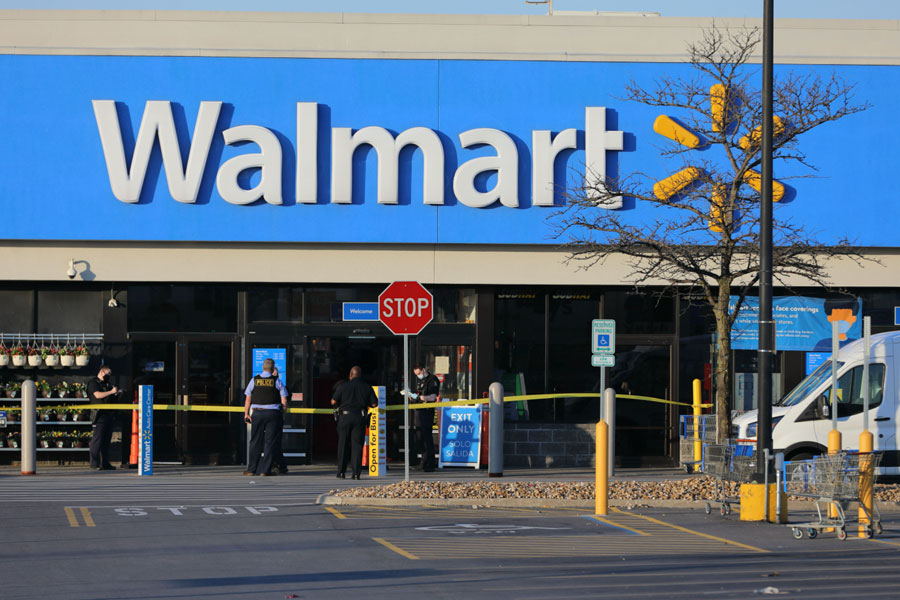 The Overland Park Walmart at 7701 East Frontage Road was the scene of an alleged shooting. Nobody was reported injured at the scene, but police are looking for two suspects and an alleged victim who all left the store before officers arrived. Photo credit Mike Frizzell.

Overland Park Police are trying to identify three people involved in an apparent argument inside a Walmart at 7701 East Frontage Road on Monday evening that reportedly led to shots being fired inside the building.

Police say they believe the suspect and victim likely knew each other.

“Words were exchanged near the cash register,” Lacy said. “Next thing you know, the suspect pulled out a firearm and started shooting at the victim.”

Lacy described the situation as an “active shooter,” saying the suspect fired at least two shots at the victim from point-blank range.

“Many people were terrified. They didn’t know what was going on,” Lacy said. “Some people even locked themselves in the bathrooms.”

He said many customers and employees were still hiding when officers arrived. There were no injuries reported at the scene, though it’s unclear if the alleged victim was injured.

“The officers, they did rush into the store looking for the suspect and also looking for victims,” Lacy said. “At this time, we have not located any victims.”

Police interviewed every customer and employee who was still at the store.

“Right now, just due to the masks they were wearing, all we know is it was a black female and a black male,” Lacy said. “We know it was a silver sedan that went northbound on I-35.”

Lacy said the male suspect was the one who pulled a gun from his waistband and fired the shots at another male.

The female suspect left in the silver car with the alleged shooter.

“If you were the victim, we need to talk to you; it’s ok to talk to us,” Lacy said. “You’re not the person in trouble.”