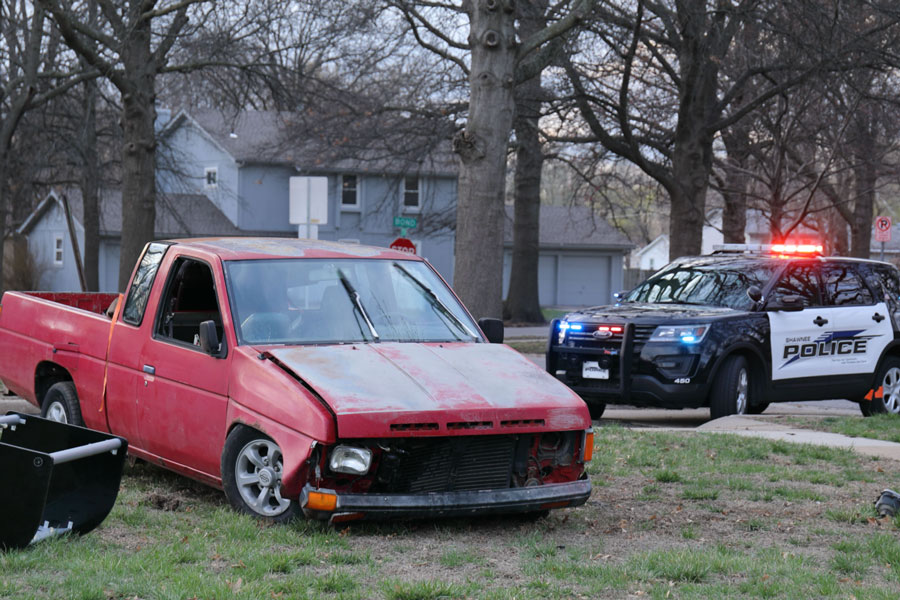 A suspect drove a stolen truck from Kansas City, Mo., along I-70 into Kansas, going along I-635 and I35. The chase eventually ended in the front lawn of a Shawnee church along West 71st Terrace, above. Photo credit Mike Frizzell.

The helicopter unit from the Kansas City, Mo., Police Department began following the truck after the driver failed to stop for one of their officers. The suspect drove west on Interstate 70 into Kansas and then south on Interstate 635 and Interstate 35 into Johnson County.

No police vehicles were following the stolen truck on the ground.

Shawnee officers followed directions from the helicopter and were able to catch up with the stolen truck about 6:30 p.m.. Recorded radio traffic indicates the driver accelerated after seeing an officer who was driving in the opposite direction.

The helicopter’s spotter reported the suspect crashed the truck in the front drive of All Nations Breakthrough Church, 11411 West 71st Terrace, and run to the east.

Shawnee officers quickly closed in and arrested the man in the 7100 block of King Street, between two duplexes.

At the scene of the crash, Shawnee Police confirmed that only one suspect was seen running from the crash, and he was taken into custody two blocks away.

Johnson County Med-Act and the Shawnee Fire Department responded to check the suspect for injuries. He refused treatment.

The suspect was booked into the Johnson County Sheriff’s Office Jail in Olathe, where he is awaiting formal charges.

No officers reported any injuries.