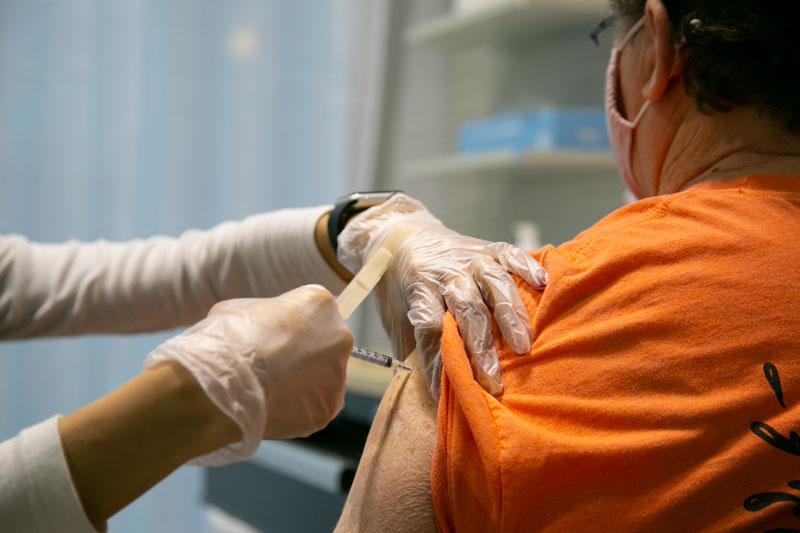 County health officials say the coming allotment of Pfizer and Moderna vaccines from the state will be the largest single-week shipment to date. That comes despite news that Kansas' anticipated allotment of single-shot Johnson & Johnson vaccines for next week has been drastically reduced. File photo.

Although Kansas expects to receive a much smaller shipment of the single-dose Johnson and Johnson COVID-19 vaccine next week, Johnson County health officials say they don’t expect that to impact the county’s upcoming vaccine clinics.

Instead, the county is expecting its largest single-week shipment of vaccines to date, made up of Pfizer and Moderna doses.

At the same time, the Kansas Department of Health and Environment said Thursday that the state will be receiving roughly 16,500 doses of the Johnson & Johnson vaccine next week, when it had been anticipating more than 100,000 doses for distribution to clinics across the state.

A KDHE press release cited “production issues” as the cause of the reduced allotment.

JoCo still set to get record-high doses next week

Even without the anticipated volume of Johnson and Johnson shots, the Johnson County Department of Health and Environment says it is still expecting to receive its largest-ever single week allotment of vaccines for next week’s clinics — just shy of 20,000 doses.

That includes 18,720 Pfizer vaccines and roughly 1,000 Moderna vaccines, which will be divided up between county-run clinics and clinics run by local hospitals.

County health director Sanmi Areola, Ph.D., said next week’s expected allotment is more than twice what the county was receiving per week about a month ago.

Some of the doses coming into the county next week are also set to go to some private health care providers to administer to their patients, Areola said.

“These are really good things. There are more and more providers that are being pulled in and more and more ways to get the shots into as many arms as possible as quickly as we can,” Areola said.

“We have been asking for more vaccine, they’re here and that translates to very good news for our residents,” Areola said.

Kansas received its last shipment of the Johnson and Johnson vaccine more than two weeks ago.

Johnson & Johnson’s production struggles are a broader issue. The company has struggled to meet an ambitious goal of producing 20 million doses nationwide by the end of March.

Johnson County has used this single-shot vaccine to target groups that are logistically hard to reach with traditional clinics, such as homeless populations and people who are homebound. All the doses the county previously received of that vaccine have been used up already, Areola said.