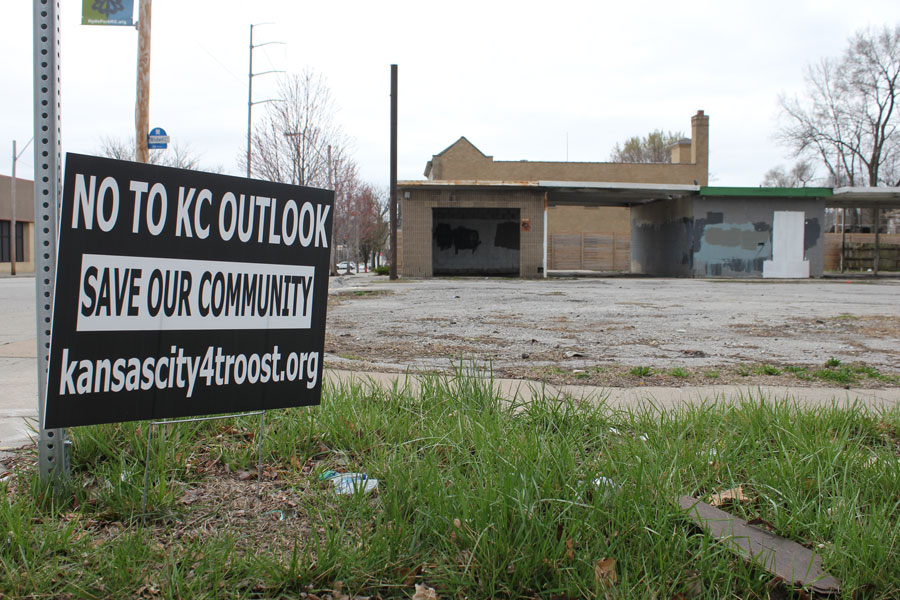 Some residents of the historic Hyde Park neighborhood in Kansas City, Mo., say Overland Park city councilmember and mayoral candidate Faris Farassati has not considered their concerns about the height and impact of a development he's backing along Troost Avenue. Above, a sign put up by opponents sits in front of the project's proposed site at Troost and 45th Street. Photo credit Kyle Palmer.

Faris Farassati, an Overland Park city councilmember known for supporting residents’ objections to development in his city, is facing growing opposition from a neighborhood group over his own development in Kansas City, Mo., which has been in the works since before the pandemic.

Homeowners in Kansas City’s Hyde Park neighborhood whose backyards abut the Farassati-backed KC Outlook project in the 4500 block of Troost Avenue say that despite their concerns and counterproposals they’ve offered, no significant changes have been made to the project since their most recent meeting with Farassati and his team last July.

Now, they’ve started a website opposing the project with an online petition that has close to 900 signatures, though not all signatures appear to be from residents in the immediate area of the proposal.

Some neighbors said they are particularly angered that Farassati, now an Overland Park mayoral candidate, seems to be applying different standards to their neighborhood than he has in Overland Park.

They say his project would skirt Troost Overlay design standards that were written in an attempt to revive an area down on its heels.

“On his website he presents himself as a man of the people, opposing overdevelopment in Overland Park, apartment invasion of Overland Park and advocating public input. And yet he never responded to any of these offers we’ve made to meet with him,” said Erik Olsen, organizer of the neighborhood opposition.

“He’s proposing to do here on Troost Avenue exactly what he says he opposed over in Overland Park. That’s infuriating,” Olsen added.

The League of Women Voters of Kansas City has also weighed in.

That group opposes future tax incentives for KC Outlook because, they say, there has not been discussion of how the developer would give back in community benefits to schools, service agencies and the like.

The League also raised concerns that the project would add more expensive housing stock to the area, while affordable housing remains hard to find, a point Farassati disputes.

Farassati counters that his plan is generally supported by residents in that area of Kansas City and that it’s only a small group of people who are not satisfied with it.

He said he’s met with neighbors consistently and has the support of other groups, including the Historic Mannheim Park Association, which wrote a letter backing the project in 2019.

The development, he argues, will ultimately make the area along Troost better for everyone with retail and affordable apartments that could house UMKC students replacing other buildings in need of repair.

He said he and his development team have met with neighbors as required and have done other studies that the city calls for.

“We have met all the conditions given to us,” he said. “I think they (the Hyde Park neighbors) just don’t want this project.”

Farassati, a cancer researcher at the Kansas City Veterans Affairs Medical Center, wants to build two five-story buildings on five parcels of land on the west side of Troost between 45th Street and Brush Creek Boulevard.

The plan is for a mixed-use space, with a total of 108 apartment units and 19,000 square feet of commercial space that includes retail and office. The project was estimated last year to cost $20 million.

The block is currently a mixture of buildings, with a CVS pharmacy across the street on the east side of Troost and the 1929 Auto World building on the west side immediately to the south of the proposed development.

A 1925 fire house renovated into an event space by a different developer sits on a spot that would be between the planned five-story buildings but is not included in the project.

Many of the buildings on the block are run down. One comprising about a fourth of the area Farassati bought burned two years ago. The other buildings will eventually be torn down, he said.

Homeowners on Gillham Road just to the west, whose back yards touch the project, objected early on.

In late 2019, they signed a letter raising a number of concerns, including the height of the buildings. At 60 feet tall, the buildings would loom over their homes, which are about half as tall, their letter said. That problem is exacerbated by the fact that they are slightly downhill from the street level at Troost.

The project has been continued several times but is now back before the Kansas City Plan Commission, with a request for a blight designation and rezoning. For now there are no tax incentive requests, but Farassati has said he may ask for them in the future.

The item is set to come before the commission next on April 20.

Differences with the neighbors

Despite the long timeline, the most immediate neighbors and Farassati have not come any closer to hashing out their differences. In fact, things have heated up.

The neighborhood opposition now has the web page and petition and also a letter from the Hyde Park Neighborhood Association backing them up.

They say they don’t feel Farassati has listened to their concerns or considered their counterproposal to build shorter, 36-foot buildings that they say would still be taller than their homes but not excessively so.

But it’s more than just building height, they say.

The Troost Overlay was the product of careful collaboration between residents who have an interest in seeing Troost revitalized. Excusing one developer from the design standards may open the door to more deviations, eventually rendering the plan meaningless, according to the Hyde Park Neighborhood Association letter.

The revitalization of this area is important to the whole city, Olsen, the opposition organizer, said. That’s why he said he’s allowing anyone to sign the petition, even if they don’t live in the immediate area.

Moreover, the area is in the South Hyde Park Historic District, which is on the National Register of Historic Places and has many structures dating to the early 20th Century.

Neighbors also say the long period of vacancy while the development is pending has been detrimental to the block. Buildings that were already in bad shape have fallen further into disrepair, they said.

The lots on which the development is proposed are now occupied by empty, decaying buildings around the repurposed events space. Olsen mentioned graffiti as an emerging problem on the street.

Resident LaVonne Meyer said the vacant buildings have attracted trespassers and sometimes verbally abusive visitors. The fire was especially scary, she said, as it happened adjacent to her back yard with flames four stories high.

But the residents also stress they aren’t not-in-my-backyard people, or NIMBYs, who oppose every development. On the contrary, they say they are very supportive of redevelopment of Troost and somewhat resigned that the buildings are likely to be at least a little taller than their homes.

“There is nobody who wants that block and those parcels redeveloped more than those of us who live on this portion of the block,” Olsen said. Meyer said if Farassati’s development could fall within the codified framework, then “we will be [its] strongest advocates.”

Farassati maintains that his development will bring new uses and possibly students to the area while upgrading the buildings and getting rid of persistent blight. He said he has the support of other neighborhood groups including the Troost Alliance.

Meanwhile, the Troost Coalition, an umbrella group of neighborhood representatives instrumental in writing the Troost Overlay standards, has not taken a position on KC Outlook.

As for the League of Women Voters, Farassati said the group has been “misinformed” about the amount of affordable housing the development will open. He expects at least 40% of monthly rents for the project to range from $590 to $850.

And for the deteriorating buildings there now, Farassati says he’s worked hard to identify environmental hazards and is moving toward cleaning them up, he said.

Although a lot of garbage has been removed, he said, he can’t do much about tearing down the buildings until after the city rules on its blight designation. Until that decision comes, Farassati said he must keep the buildings up as evidence but he will move quickly to raze them as soon as he can.

In addition, he said he knows of two instances where the property manager had to call police to remove people from the property. In one case, trespassers were using the site for a pop-up yard sale, he said.

The architecture also is in harmony with the Troost Overlay, he said.

Farassati said he’s been careful to meet every city requirement and has been talking to neighbors since the first neighborhood meeting about the proposal in 2017 and has six letters of approval, with Hyde Park being the exception.