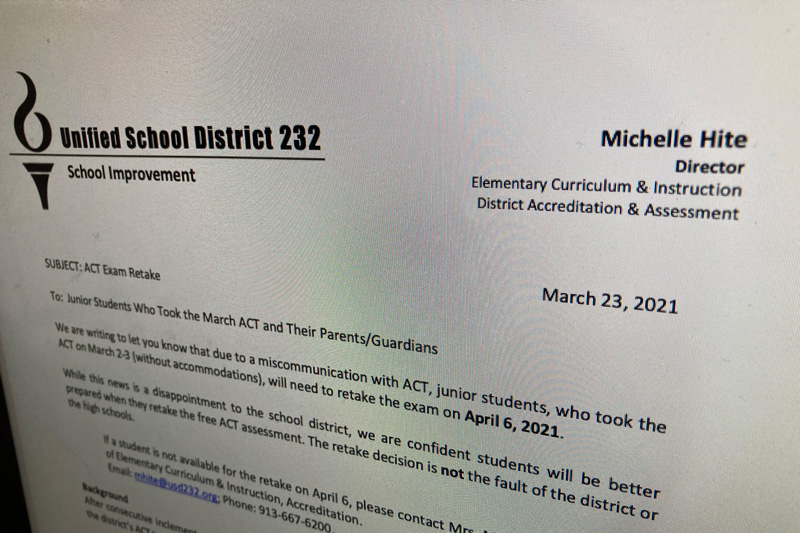 USD 232 officials said they requested and received permission from the ACT to administer exams on two March dates outside the company's specified testing window. But when they turned the completed tests in, ACT refused to score them, according to a district memo. Photo credit Leah Wankum.

Juniors at Mill Valley and De Soto high schools who took the ACT on March 2 or 3 will have to retake the test on April 6, after the ACT declined to score the exams.

USD 232 administrators in De Soto sent a notice about the need for retakes to students and families Tuesday.

“While this news is a disappointment to the school district, we are confident students will be better prepared when they retake the free ACT assessment,” administrators wrote in the letter.

District officials made clear in their letter to families that they believe fault lies with ACT and not with the school district or either high school.

“It is vitally important that students and parents understand this issue is not the result of any action by the administration at De Soto High School and Mill Valley High School, nor reflection on our teachers or counselors,” the letter said. “The decision by the ACT committee to require retakes speaks to ACT’s internal documentation and communication missteps, among themselves, and with school clients.”

The district’s ACT test coordinator had identified the March 2 and 3 test dates, which were outside ACT’s specified testing window, and received approval “directly from ACT,” according to the district’s letter.

However, after receiving the completed tests from March 2 and 3, ACT notified USD 232 that it would not score the exams.

The district asked ACT to appeal its decision but the ACT compliance committee did not change its determination.

“Like you, USD 232 is extremely disappointed in the committee’s decision and has expressed so in clear terms,” district administrators wrote.

“We support ACT’s commitment to the integrity and validity of the standardized testing process, and apologize for the inconvenience caused by this decision. In a year filled with resilience and flexibility, we appreciate you as we work to attain scores for students in April,” the letter added.

Juniors at both schools should watch for information from each high school regarding the ACT exam details for April 6.

Students who are unavailable to retake the exam on April 6 should contact Michelle Hite, director of elementary curriculum and instruction and accreditation at mhite@usd232.org, or call (913) 667-6200.

Alvie Cater, USD 232 spokesperson, said both the original test and the retake are free of charge for students.

Below is a copy of the full letter.