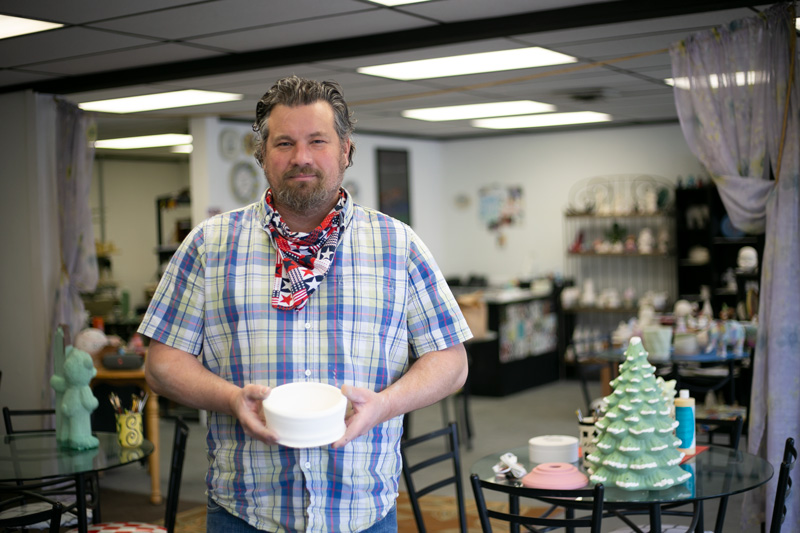 More than a year into the COVID-19 pandemic, Shawnee business owner Rodney Rockett is struggling to keep his pottery studio afloat. Grammy's Walls of Clay was close to turning a profit before everything shut down last spring. He's still playing catch-up on rent, and as a self-employed business owner with virtually no staff, his business hasn't qualified for federal COVID-19 relief.

The Shawnee business owner always keeps his hands busy at his pottery studio, Grammy’s Walls of Clay. But more than that, his mind is busy, as he wonders how he’ll make ends meet.

More than a year into the COVID-19 pandemic, Rockett says he is still struggling to keep the studio afloat. Last month, he sold off his extra pottery wheel and kiln just to help pay rent.

“A lot of people think that just ‘cause you’re a business, you automatically make money, and they don’t realize that you’re making less than they do because you’re relying on word of mouth,” he said. “You can’t afford too much advertising. You’re taking money to pay back rent.”

Located at 12311 Johnson Drive just west of Quivira Road, the “paint your own pottery” studio needs visibility, word-of-mouth advertising and large groups of customers who will make large sales.

Rockett relocated Walls of Clay in fall 2019 from his old space on Midland Drive in hopes that people might notice the studio along the route of the city’s St. Patrick’s Day parade. But the parade has been canceled two years in a row because of the pandemic.

Now, he’s at risk of closing the studio permanently.

“As a small business going through the pandemic, it really opens up my mind to, ‘Do I even want to be a business owner?'” Rockett said. “The stress, the not knowing if you’re going to fail, or keep from failing. I’m not a person that likes to fail or give up. I’ve had a lot of friends and family tell me it’s time to just call it, you’re so far in the hole financially.”

Scaling up before the shutdown

Even before the pandemic, Rockett wasn’t quite making a profit.

He’s been slowly growing the business for the past five years, eventually purchasing the extra kiln and two pottery wheels in November 2019 so he could scale up and teach customers to throw clay. He had nearly started to break even. Then the COVID-19 pandemic hit, and everything shut down.

“It took away just about all the sales,” he said. “I’m just now starting to get a few people that are OK with coming in and having a birthday party, or their kids’ friends’ parents are OK coming to a group.”

Rockett bought Walls of Clay about five years ago and added “Grammy’s” to the studio’s name in honor of his late mother, who enjoyed being around children. For him, the pottery studio is a place for experiences — much like concerts, parades and axe-throwing — and so, having customers inside the building has been the only real way to make money.

Walls of Clay earns most of its revenue from group events like birthday parties. Large groups equal large sales. But in a pandemic that discourages gatherings and encourages social (or at least physical) distancing, group parties have been prohibited or strongly discouraged.

‘A small fry’ looking for relief

As far as local and federal COVID-19 relief, Rockett feels left behind.

He’s a self-employed business owner with virtually no staff — his pottery teacher quit coming at the start of the pandemic to protect her family’s health, and his daughter has another job — so relief has been difficult or impossible to access.

He says he didn’t qualify for the federal Paycheck Protection Program that was part of a pandemic relief bill passed by Congress last year.

“We’re trying to reach out there and grab some of this help, but when you’re the only owner and employee, and they’re looking at whatever info of your taxes and stuff, and making these formulas, they’re kind of writing you off that you’re going to close anyways,” he said. “It seems like if you’re a small fry, you’re not going to get any help. So you’ve got to still rely on what you can.”

Rockett did ultimately receive about $4,200 in relief from the Shawnee Economic Recovery Assistance grant program, after city leaders relaxed restrictions.

It caught him up on two months’ rent. At first, he didn’t qualify, but city staff said they eventually made an exception.

His landlord, Martel Properties, has also worked with him on adjusting his rent.

Hanging onto a vision for the studio

Like some restaurants and boutiques, Rockett has tried pivoting his business.

He sells take-home pottery kits, but some customers still haven’t returned their pottery to have him fire it. When he reopened his doors last summer, he spaced apart tables to keep groups separated. He also tried emailing coupons to customers.

None of it has been enough, he says.

He has still yet to turn a profit, instead relying upon side work as a carpenter to pay the studio’s bills.

“I know you’re not supposed to mix personal income with business income, but when your name’s tied to it, it’s a whole different story,” Rockett said. “I’m not going to see a profit for several months.”

In his dreams someday, he’d like to expand the studio. He hopes to mold his own pre-made pottery and allow artists to come in and throw their own clay.

“I have a vision for the business,” Rockett said. “I’m a carpenter by trade, so I can build, I can design, I can create, and I’d like to do the business that way, let people come in, design, create, or modify pottery that’s already made to be something cool.”

While holding onto that vision, Rockett simply hopes things can return to “normal” as soon as possible.

He stressed that he wants his customers to feel safe, healthy and comfortable, whether they wear masks or not.

Over the years, Rockett has watched his studio build community — parents play with their children, kids make new friends, strangers make conversations and even exchange numbers.

For him, the studio will always be a place for gathering folks together and enjoying the experience of painting pottery and making new friends. 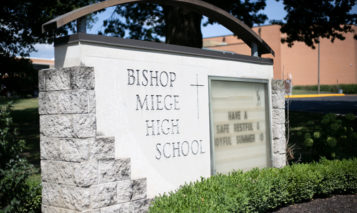 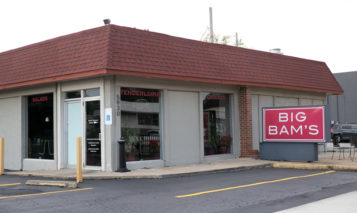