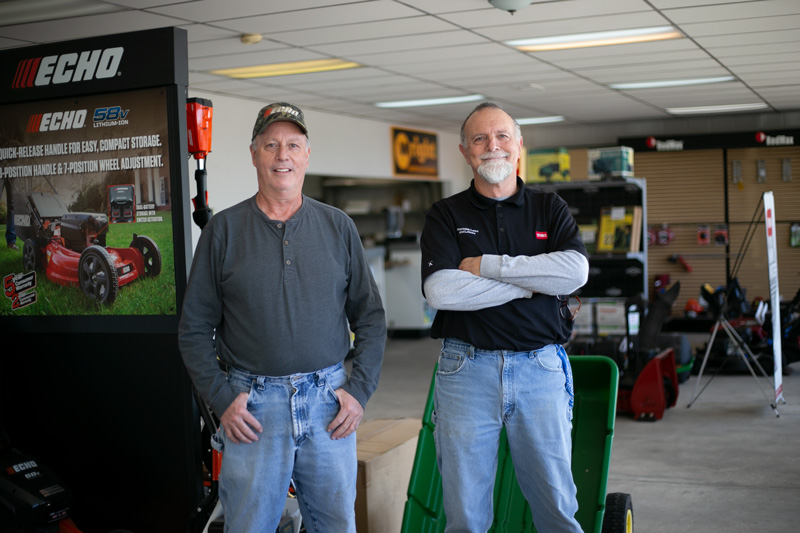 After 31 years in business, Steve Reynolds (left) and Mark Reynolds, brothers and owners of Reynolds Lawn and Leisure, are closing their shop permanently.

After 31 years in Shawnee, Reynolds Lawn and Leisure is closing permanently.

The last day open will be Wednesday, March 31.

Steve Reynolds and Mark Reynolds, brothers and owners of the lawn care business, said they’re thankful for the community’s support over the past three decades.

“Thanks to the community for supporting us all these years,” Steve said. “And the city of Shawnee has been good to us.”

The brothers first opened Reynolds Lawn and Leisure in January 1990. Both of them said they’ll miss their customers.

“There will be a lot of people that we’ve had relationships with over the years that we’ll miss seeing and being around,” Steve said.

“The timing’s right,” Mark added. “As much as I’ll miss some of our customers, I’m also kind of tired. I want to get outside and stay away from the telephone awhile.”

They are selling off lawn care equipment and supplies. As to the building, they have already sold it to neighboring motorcycle dealership Shawnee Cycle Plaza so it can expand.

While the Reynolds brothers are unsure about next steps for themselves, they do plan to take this spring off and spend time enjoying family near their homestead in Eudora. Steve says he will probably go fishing, but as for Mark …