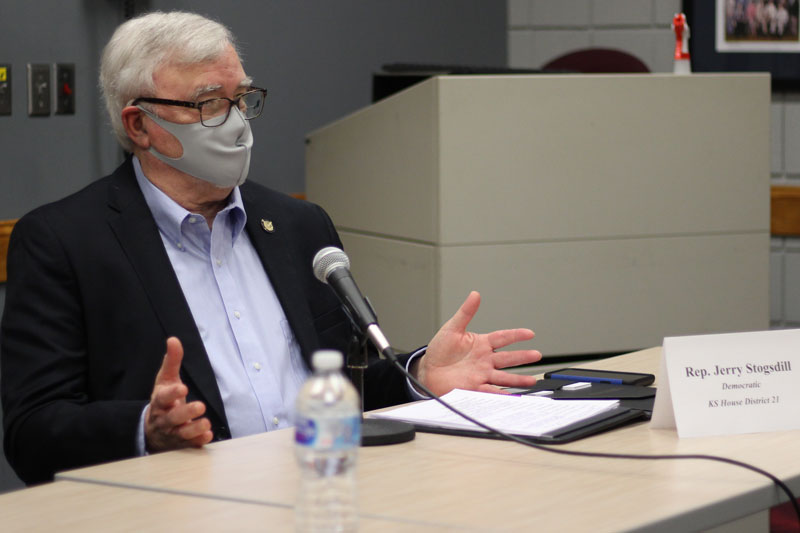 "With super majorities in both the House and Senate, the majority Party has submitted numerous bills aimed at taking us back to the disastrous days of the Brownback administration," said Rep. Jerry Stogsdill in this week's Capitol Update column. Above, Stogsdill at the Post's 2020 candidate forum.

Below is the submission from Democratic State Rep. Jerry Stogsdill, who represents District 21.

This year the number of bills passed may not determine the measure of success in this Session of the Legislature.  The true measure of success in this Session may be our ability to STOP the passage of a large number of terrible bills, which are now before the House and Senate.  With super majorities in both the House and Senate, the majority Party has submitted numerous bills aimed at taking us back to the disastrous days of the Brownback administration.

So far, the ultra-conservative leaders in the House and Senate are supporting legislation that would:

Majority Party leadership is NOT supporting the following:

On the positive side we did pass a bill authorizing 100 million dollars in low interest loans that would be available to cities and counties that were hard hit by utility bills that went ballistic during the dangerous cold snap we suffered through in February.  That bill had bipartisan support and was passed into law, literally, in a matter of hours.

There is still hope for a productive session of the Legislature based on three factors:

As always it is an honor and a privilege to represent the best interests of the people of the 21st District.  If you ever have any questions or suggestions for me, I can always be reached at jws4414@aol.com or jerry.stogsdill@house.ks.gov.  Thank you for your ongoing support.