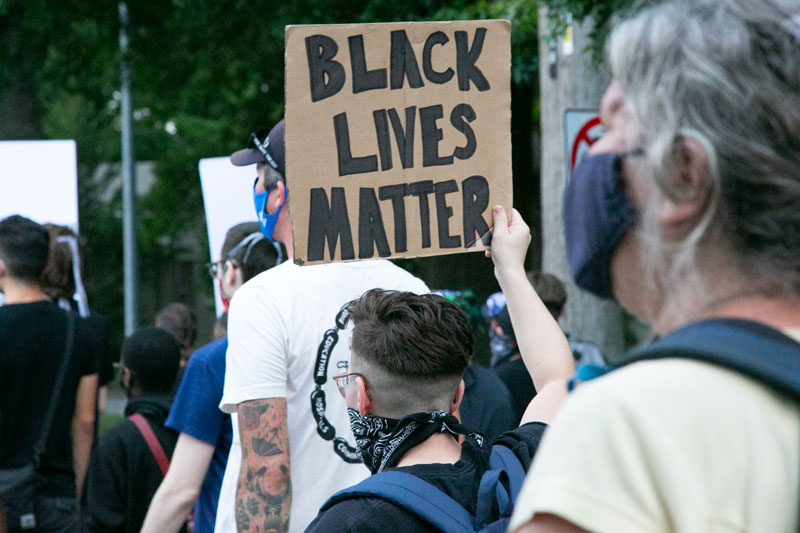 Several Black Lives Matter demonstrations occurred around Johnson County in summer 2020, including this march down State Line Road. The Kansas City Star reports a homeowner in Overland Park floated the idea of calling a friend with the Proud Boys to protect his neighborhood ahead of a planned demonstration in July. File photo.

Some Overland Park residents told city officials they would consider calling a homeowner’s friend with connections to the white nationalist group the Proud Boys in order to protect their neighborhood ahead of a planned Black Lives Matter demonstration last summer.

That’s according to a Kansas City Star editorial, which reports the conversation took place in July 2020 between Overland Park law enforcement officials and the residents following a protest near Johnson County Community College.

“Basically the conversation is, ‘Listen, if you guys aren’t going to do your job enforcing the law, then we’re going to have to bring people in that will,’” Overland Park Police Chief Frank Donchez told the Star’s editorial board. “And then, the references made to the Proud Boys, and that they would bring in armed people to line the streets of their neighborhood to protect their homes. And I said, listen, that’s a bad idea. That’s a really bad idea. We don’t need armed confrontations.”

Donchez said he took the homeowners seriously, but the Proud Boys did not show up at any demonstrations in Overland Park last year.

A subsequent protest in a nearby neighborhood on July 24 ended with four Black Lives Matter demonstrators arrested.

St. Joseph Catholic Church in Shawnee and the Community Blood Center are hosting a blood drive from 1 to 7 p.m. Monday, March 22, at the Knights of Columbus Hall, 11221 Johnson Drive.

Donors can make an appointment online at savealifenow.org and use Sponsor Code stjosephcatholic, or by contacting Virginia Wiedel, parish blood drive coordinator, at (913) 268-3874 or vwiedel63@gmail.com.

For $120,000, Affinis will create plans for the repaving of about 10 residential streets across the city. Streets on the docket include 82nd Street between Roe Avenue and Somerset Drive, as well as 71st Street between State Line Road and Belinder Avenue.