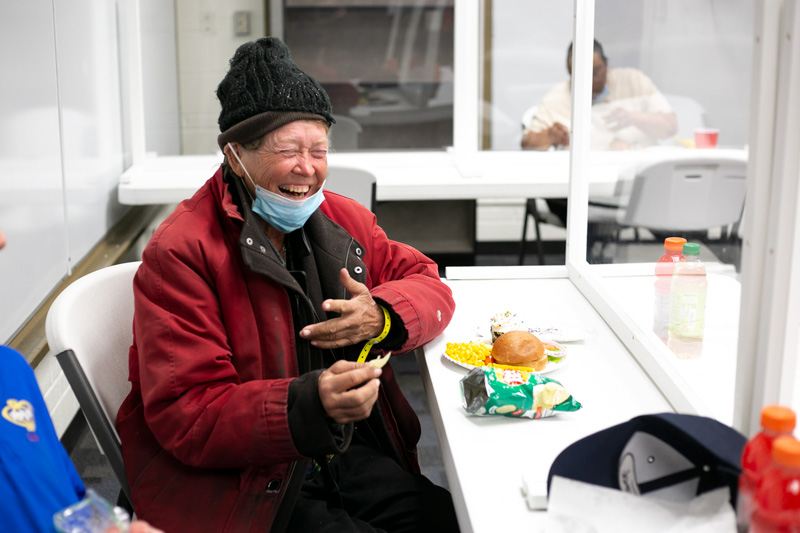 Lenexa city leaders have adopted new city codes that will regulate homeless shelters. The only shelter immediately impacted in Lenexa is Project 1020, hosted by Shawnee Mission Unitarian Universalist Church in Old Town. Above, Teri Lynn Vincent, a Project 1020 guest, during dinner at the shelter. File photo.

The Lenexa City Council on Tuesday briefly discussed the new regulations before unanimously agreeing to adopt them as part of the municipal code.

City councilmembers said the codes strike the right balance between meeting the needs of folks without a roof over their heads and the concerns about public safety in areas around shelters.

“I, too, want to thank everyone who’s been providing us an education over the last window of time,” said Councilmember Dan Roh. “I’m very much comfortable with where we’re at because I think this is a journey. I don’t think we’re making a decision tonight that is end-all. I think the journey that we’re on is one where we do need to have others to participate over time.”

Several city leaders added that public safety remains a top priority and that addressing homelessness is a work in progress.

“Lenexa is going to do our part in this, but everybody else has to pick up some of the load, too. We are not going to answer the homeless shelter problem for the entirety of Johnson County,” said Councilmember Julie Sayers. “Where we are is a place of balance and a place of compromise.”

Councilmember Courtney Eiterich asked if the city would consider allowing shelters with 30 guests to operate year-round. At this time, other councilmembers declined to consider that extension, instead opting to focus on this first step.

The only shelter the new code immediately impacts is Project 1020, which is currently the only cold-weather shelter for single adults in Johnson County. The shelter is hosted by Shawnee Mission Unitarian Universalist Church on Pflumm Road in Old Town Lenexa.

Per Lenexa’s new regulations, Project 1020 can open for the next winter season.

What the new code says

In a nutshell, Lenexa’s new code defines homeless shelters and allows them in any religious institution as an accessory use, capped at 10 guests/residents.

A religious institution could host a shelter with up to 30 guests but would need to meet more qualifications, including more floor space and a plan for access to reliable transportation.

Project 1020 houses 30 guests, but Shawnee Mission Unitarian Universalist Church will have to make some adjustments to meet building code requirements.

Dale Trott with the church said church leaders are in talks now about next steps.

Under the newly adopted code, stand-alone homeless shelters will only be allowed in certain commercial districts of the city and require special use permits to operate.

Stand-alone shelters must have a management plan and are limited in the number of residents/guests they can serve based on specific requirements spelled out in the regulations.

A special use permit would be good for five years to allow a shelter time to access grant funding opportunities for scaling up.

Homeless shelters will be able to operate only in the cold-weather months, from Nov. 1 through April 1.

More details about the code amendments and project process are available in the March 16 council meeting packet.

Project 1020 can stay in Lenexa

Adoption of the new city code comes more than a year after Shawnee Mission Unitarian Universalist Church sued the city for initially denying the church’s request to host the shelter. The city and church settled out of federal court, and the shelter first opened in December 2019.

City leaders took a brief break after the vote to greet the shelter and church leaders and share thoughts about working together in the future to address homelessness.

Stepping out of the council chambers, the shelter staff and church members embraced in celebration of the milestone.

“I feel moved because it seems that hearts and minds have been changed, and I feel very grateful for everyone who went and is going on this journey with us, and forever grateful to Barb [McEver] and Jim and Jennifer [Schmidt] and Dale [Trott] who have really been an amazing team,” Schwab said, “and grateful to the city for being so thoughtful and kind.”

McEver, Project 1020’s co-founder, said she was happy for the outcome.

“This gives us so much hope, I think, for even better things to come,” she added.