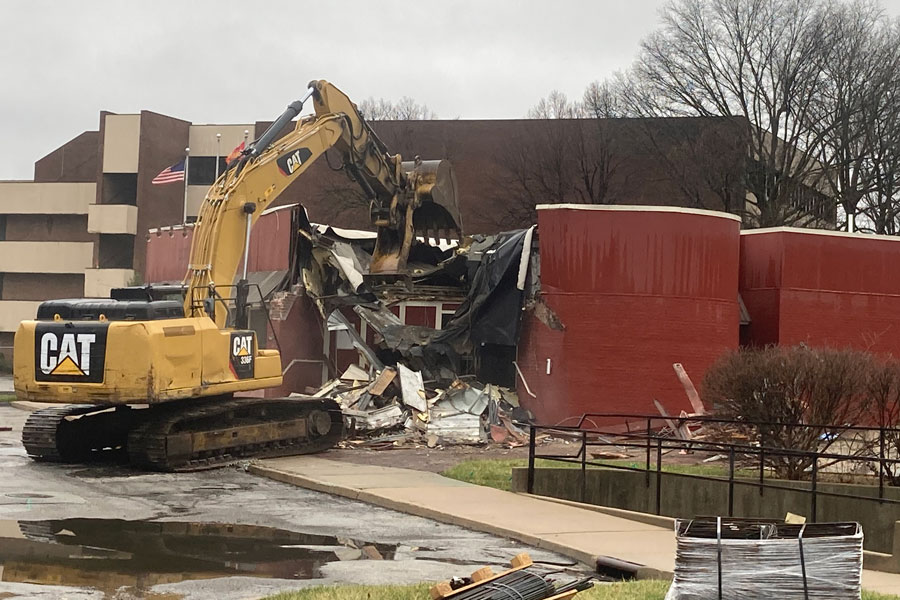 On Wednesday, March 17, a bulldozer could be seen tearing down the building of the former Stroud's in Fairway. The demolition will make way for a new, 6,500 square foot, multi-tenant building that will feature retailers and a Starbucks with a drive-thru. Photo credit Kyle Palmer.

The former Fairway Stroud’s location, 4200 Shawnee Mission Parkway, is being demolished this week.

A bulldozer was seen working on the east side of the old pan-fried chicken restaurant on Wednesday morning, March 17, ripping into the red brick and metal facade.

Developers are bringing down the building to make room for a new 6,500-square foot, multi-tenant building featuring retailers and a Starbucks with a drive-thru.

“The city is excited, we have not seen this kind of development before — or at least not for a long time,” City Administrator Nathan Nogelmeier said. “I think the council, in general, is excited to see something new and successful in that space.”

The Fairway City Council approved the redevelopment site plan back in October 2020, as well as a 1.5% add-on sales tax in December 2020 that will be added to purchases at the site.

That decision in December was the first time that Fairway had approved a community improvement district tax incentive for redevelopment in the city’s history.

Stroud’s had a more than a 10-year run in Fairway, but the location closed in October 2019 because the site “was not to Stroud’s standards” and the company wanted to make way for “a new development,” according to signs posted on the restaurant’s doors in 2019.

A spin-off, Stroud’s Express, is moving in not too far from the former restaurant at 5405 Johnson Drive in the Mission Mart Shopping Center. The development is expected to be completed by spring 2022, Nogelmeier said.

MREM Fairway LLC, the developer, could not be reached for comment.

This story has been updated with comments from city officials.