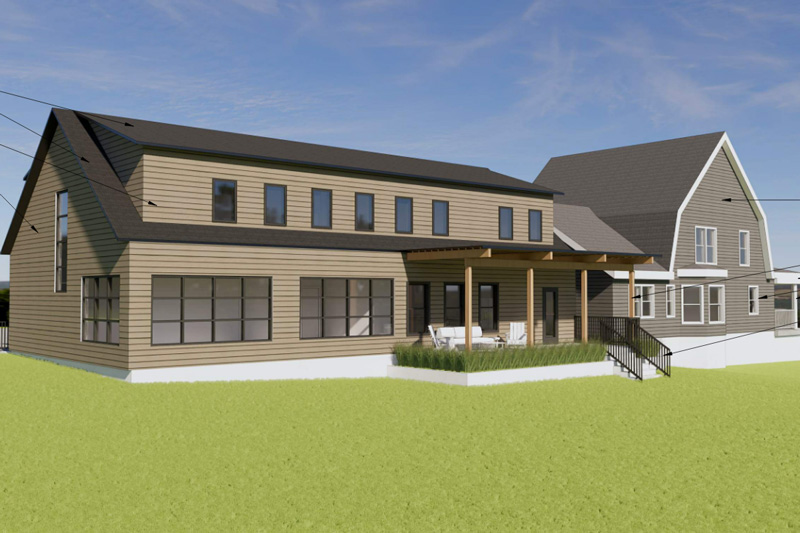 Autism from the Start is renovating and expanding its facility, a historic home in Old Town Lenexa. The city council on Tuesday will consider a special use permit for the site. Above, a design rendering of the expansion.

Autism From The Start, an early intervention center for young children with autism, is moving forward with plans to expand its location in Old Town Lenexa.

Michelle Macrorie, pediatric psychologist and founder of Autism from the Start, said the plans to renovate the house and expand onto it will accommodate more children on site.

The center had been planning to move forward with renovations when those plans initially came in over budget, and then the COVID-19 pandemic hit, grinding everything to a halt last year.

The revised plans essentially allow for more open space on the site, a larger playground, and less parking than what would normally be required for a business.

The Lenexa City Council on Tuesday, March 16, unanimously approved a 10-year special use permit for the center to operate in Old Town. The Lenexa Planning Commission earlier this month also voted 8-0 to approve a revised final site plan for the center, which is located in a historic home at 9426 Pflumm Road. Commissioner Ben Harber was absent March 1.

A look at new plans

The new plans now provide for a “better functional use” of the site, “allowing [Autism From The Start] to create a cohesive natural playground to the south of their building,” according to city documents.

Planning commissioners were mostly concerned about adequate parking on the site and having enough space for cars to line up during pickups and dropoffs on site.

Macrorie said coordination between families and the staff, such as assigning times for parents to pick up and drop off their children, have allowed for smooth flow of traffic in order to avoid spilling out onto Pflumm Road.

Autism From The Start also recently launched a second location in Shawnee.