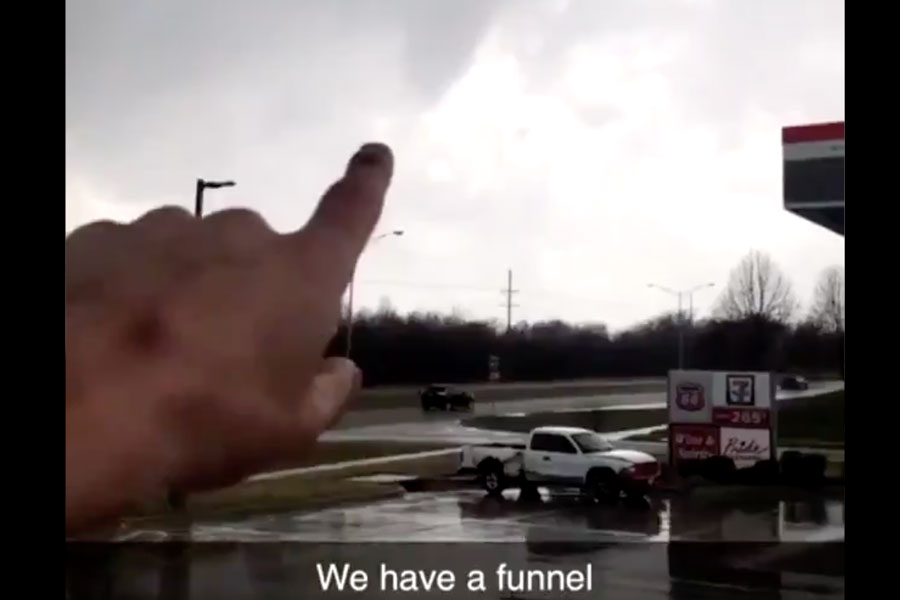 The National Weather Service says an EF0 tornado with maximum wind speeds of 85 miles per hour touched down briefly outside south Overland Park on Monday, damaging some homes in the area. Above, a video posted to social media of what appears to be a funnel cloud forming near 135th and Quivira. Image courtesy Twitter.

Meteorologists with the NWS classified the tornado as an EF0 with a maximum wind speed of 85 miles per hour.

The Johnson County Sheriff’s Office reported seeing a funnel cloud in the area of 199th and Switzer, just south of Overland Park, at about 4:30 p.m.

That system tracked over southeastern Johnson County and eventually rolled into Missouri.

There were no reports of injuries, but social media posts Monday evening showed damage to houses, outbuildings, barns and trees.

FOX 4 TV reported at least 20 homes sustained damage in a neighborhood near 193rd Terrace and Antioch.

Some damage seen around the 193rd, 194th terrace loops near Stilwell, KS. pic.twitter.com/qv1fZIhz7I

The NWS issued two separate tornado warnings for parts of southeast Johnson County on Monday, the first at 3:55 p.m. and the second at 4:26 p.m.

Staff meteorologist Chris Bowman said tornado warnings and other weather-related alerts can be issued countywide, but in this instance, the warnings were targeted for areas in the county’s southeast corner, around Spring Hill, southern Olathe, Stanley, Overland Park and Leawood.

He said that was due to how the storm was moving and what areas the NWS determined would be most impacted.

“We draw a polygon around what we feel is the area under greatest threat,” Bowman said.

That’s why you may see tornado alerts accompanied by such polygon-shaped graphics on TV or social media:

Sirens activated for impacted areas only

With the NWS’s alerts centered on the southeast corner of the county, the Johnson County Department of Emergency Management did not activate tornado sirens for the entire county.

Still, residents living in northern Johnson County where sirens were not activated may have heard sirens going off to the south.

Pittman acknowledged that many Johnson County residents were not included in the warning and may not have heard sirens Monday, or heard them distantly.

JCDEM officials attributed that failure to a faulty repeater, a device which receives commands and broadcasts them across a large area. After a backup repeater was brought online, the sirens were successfully tested a day later.

Pittman said that “the alerting process seemed to have worked well” Monday.

Not all residents received NotifyJoCo alerts either

Some Post readers questioned why they did not receive an alert about the tornado from NotifyJoCo, the county’s emergency notification system.

The geographically limited nature of the NWS’s tornado warnings seems to have played a role in that, too.

Johnson County Commissioner Becky Fast quoted the county’s emergency management director in a Facebook post Monday night, explaining that Notify JoCo alerts were sent only to residents who had signed up for the service and who lived within the polygon-shaped areas affected by the NWS’s tornado warnings.

Fast’s post encouraged residents who had signed up for NotifyJoCo to make sure in their settings they have opted in to receiving tornado warning alerts.

Users of NotifyJoCo can also list up to 5 addresses at which they would like to receive emergency notifications, which could allow for people to receive alerts at multiple places, like their home, work, their children’s school or a family member’s house.

But if none of a residents’ addresses listed for their NotifyJoCo account were in the areas impacted by Monday’s tornado warnings, they would not have received an alert.