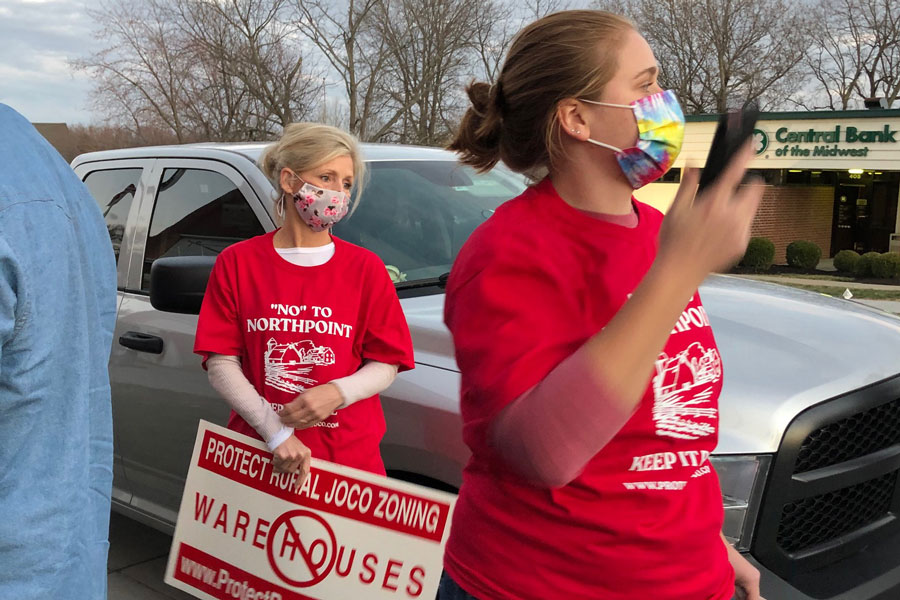 Nearby residents have opposed plans to add nearly a dozen warehouses on more than 600 acres of land just off I-35 near Edgerton. Kristeen (left) and Leah Russell of Gardner were among several dozen residents who showed up at Thursday's Edgerton City Council meeting to voice their disapproval of the plan, which was ultimately remanded back to the city planning commission. Photo credit Roxie Hammill.

After hearing three hours of impassioned testimony from more than 60 people, the Edgerton City Council Thursday decided to follow its staff’s advice and send a rezoning request for 636 acres of warehouses back to the city planning commission for clarification.

The council sat for six hours — finally wrapping up around 1 a.m. — after considering the rezoning proposal plus other items related to Logistics Park Kansas City, a burgeoning warehouse district taking root near the BNSF intermodal freight facility.

The hardest fought items were rezoning requests by NorthPoint Development on seven parcels of land south of Interstate 35. The developer hopes to put eleven warehouses totaling as much as 9.8 million square feet on the land, which runs mostly down the east side of Gardner Road from 199th Street to the Miami County line.

But neighbors whose homes dot the rural landscape in that area — in many cases, just across the street from the proposed parcels — have forcefully opposed the idea.

Neighbors say they were blindsided by the annexation of the land into Edgerton during the Christmas holiday season last year and by the fact that the land was bought under the name of other companies with names that appeared unrelated to warehouses.

Letting NorthPoint operate warehouses so close to homes would make it impossible to sell for a decent price, or to enjoy the country life amidst the lights and trucks, they say.

Dustin Calvin summed it up Thursday night for opposed residents: “I see NorthPoint as a parasite and Edgerton as the host.”

Laura Winslow said the home where she raised eight kids sits only 30 feet from NorthPoint property.

“I don’t want to look out my back deck while I’m having my coffee and see a warehouse,” she said. “I won’t see the sun anymore.”

Neighbors against the rezoning formed a Facebook group, the Warehouse Warriors – Citizens Against NorthPoint. They arrived a half hour before the meeting in a car caravan, some carrying signs or wearing red T-shirts asking the council to say no to the proposal.

Some 80-100 people listened, either inside the socially-distanced hearing room or across the street at the library.

Of the over 60 people who spoke, most were against the rezoning, although several stressed they would not be if the project was farther north.

Ben Johnson of Gardner said he and his wife bought their dream home just last year after being reassured by the county and city planning guidelines for the area. The buyers of nearby property appeared to be a cattle company, which also reassured him, he said.

“My whole life’s dream was to work a job and have a farm, “Johnson said. But after only having the property a month, he said the rezoning notice signs went up.

After finding out about the warehouse plan, Johnson said, “I spent about a week trying to get my wife out of depression because she thought she trapped us into this property.”

He said the planners should not allow the warehouse area to be interspersed with homes.

While many of the neighbors were concerned about what the warehouse noise and traffic would do to their quality of life, others also mentioned environmental concerns. The industrial area should stay north of I-35, keeping further away from Hillsdale Lake and its watershed, they said.

Chris Cardwell, an urban conservationist with the Miami County Conservation District, said the investments in soil and water health in the Hillsdale watershed are being “dangerously compromised,” by the conversion of agricultural land to warehouses.

Cardwell asked the council to “pull back” and recommit to planning that would protect the watershed area. He called the current proposed rezoning and development “grossly negligent and has the potential to further cause irreparable harm to the watershed and to Hillsdale Lake.”

The lake is the sole source of drinking water for more than 56,000 people in the area.

Leah Russell, a horticulturalist, said the acres of nature lost to warehouses will never come back.

“No amount of stormwater management will bring back the trees and natural terrain that will continue to be flattened,” she said.

Not everyone was against the development, though.

Several people who spoke at the beginning of Thursday’s meeting — some of whom were employees of the logistics park — touted the increase in jobs and other economic ripple effect on local businesses brought about by already-existing warehouses in the area.

Anna Barnet of Gardner said, “I think it’s a positive thing. It’s brought a lot of jobs. I’m all about it.”

Josh Drake said the small town in Missouri where he grew up lost jobs. The warehouses provide jobs that keep kids from moving away or having to drive a long way to work, he said.

Fred Bailey, who owns three farms near the rezoning parcels, said not all rural people are against the warehouses, either.

He called them the “highest and best use of the property.”

NorthPoint spokesperson Patrick Robinson said the company plans to remain a good partner with the city. The company is building “durable assets” for the long-term benefit of all concerned.

Councilmembers asked a few questions but ultimately voted unanimously to send the item back to the planning commission, which had previously recommended the warehouse proposal be denied. The council asked for more clarity on commission members’ reasoning for that recommendation.

The council went on to approve rezoning applications for five other parcels totaling about 133 acres and to pass a resolution to issue industrial revenue bonds for property tax abatement to help finance a 600,000-square-foot facility in the logistics park.

The applicant, Wellsville Farms LLC, would pay $96,000 a year in lieu of taxes, or about 16 cents per square foot. Wellsville Farms was one of the companies that bought property for NorthPoint.