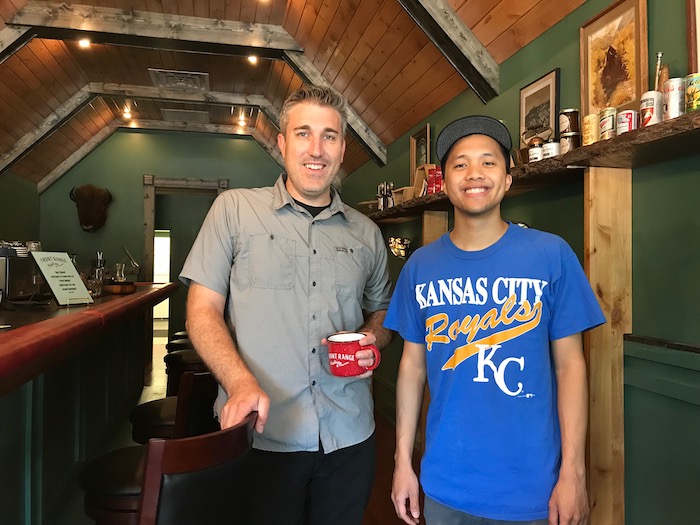 Made in KC will bring a new ocean-themed coffee shop and bar concept, Outta the Blue, to Leawood's Park Place in May 2021. Above, Made in KC co-owner Keith Bradley (left) and coffee shop staff member Jeffrey Sanoubane at another Made in KC establishment, Front Range Coffeehouse and Provisions. File photo.

A new coffee shop and bar concept from the popular local goods retailer Made in KC is heading to Leawood’s Park Place Shopping Center this spring.

Outta the Blue, as it’s being called, is set to open in May.

Made in KC  has shops across the metro selling local food and wares, including on the Country Club Plaza, at Corinth Square and at Prairiefire.

The owners say Outta the Blue will put a new spin on the coffee shop concept they developed with Fairway Front Range Coffeehouse & Provisions, which opened at 2718 W. 53rd in the Fairway Shops in July 2019.

Keith Bradley, Made in KC co-owner, said Park Place in Leawood stands out because of its other local tenants — and current lack of a coffee shop.

“They have a good restaurant scene over there, really good other local tenants and amenities, but there is no coffee out there,” Bradley said. “It seemed like a good neighborhood and part of the city that could be well-served by a coffee concept.”

Bradley says Outta the Blue will feature a mixture of local, national and international coffee, juice, wine and cocktail menu items that play into an ocean theme.

In contrast to Front Range’s cabin-like feel and mountain theme, Bradley said Outta the Blue will have a different ambience with large planters with palm trees and rope swings for some seats.

Bradley said he and his partners, Thomas McIntyre and Tyler Enders, are aiming to open Outta the Blue in May 2021 and hope to get the same level of customer response as they have received for Front Range.

“We hope [it will be] similar to the way people responded to Front Range, where people came to check it out and became loyal customers because they knew it was done by Made in KC guys or the Made in KC company,” Bradley said.