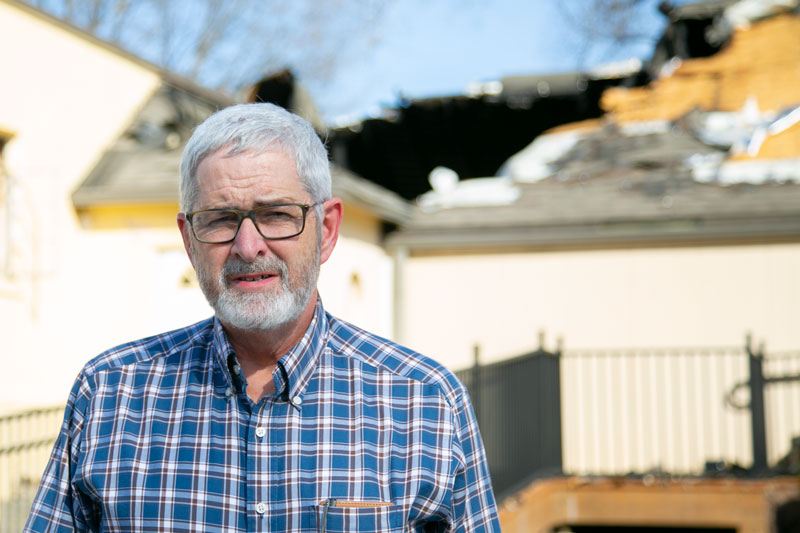 Mission's First Baptist Church will be looking for a new place to relocate following the March 4 fire, said Pastor Larry Scupham, pictured above.

Investigators with the Bureau of Alcohol, Tobacco, Firearms and Explosives’ Kansas City field office have ruled the fire an accident, saying it likely was electrical in nature. Nobody was injured during the incident.

Pastor Larry Scupham said he received a call from the church’s office that evening and arrived at the scene just after the first firefighters showed up.

While the fire didn’t seem drastic at first, the flames grew and began shooting out of the building’s roof. Eventually, part of the wing’s roof collapsed.

Scupham said he expects the older building, which stands at the north end of the main sanctuary to be a complete loss.

“It didn’t look too bad at first, but [the firefighters] were calling for back-up and it was evident they knew it was going to be bad once they opened up the roof and got in to fight the fire,” Scupham said. “It was pretty devastating at first, with that, it was almost like a shock.”

Still, Scupham said the church has “been blessed” that the fire occurred in an older part of the church that hadn’t been regularly used in about 10 years.

Firefighters were able to keep the flames away from the newer, detached building, where the congregation hosts its services and Sunday school in and also has its offices.

Still, the smoke damage at the newer building means the congregation will have to relocate for the next four to six months, Scupham said.

A couple of sister churches have opened their doors to the congregation, but Scupham said he hopes to lockdown a temporary space — that won’t change on a weekly basis — close to Mission.

Almost all of First Baptist’s regular attendees showed up at a church several miles away on the first Sunday morning after the fire, Scupham said, which encouraged him in the congregation’s relocation efforts.

Since insurance will cover all the loss and rental space expenses, Scupham said the community can help by simply supporting the congregation and praying for a temporary space to open up.

“I think finances are going to be okay, it’s just going to be kind of keeping everybody together and encourage them through this transition because everything is going to be completely turned upside down from what it was a week ago,” Scupham said.