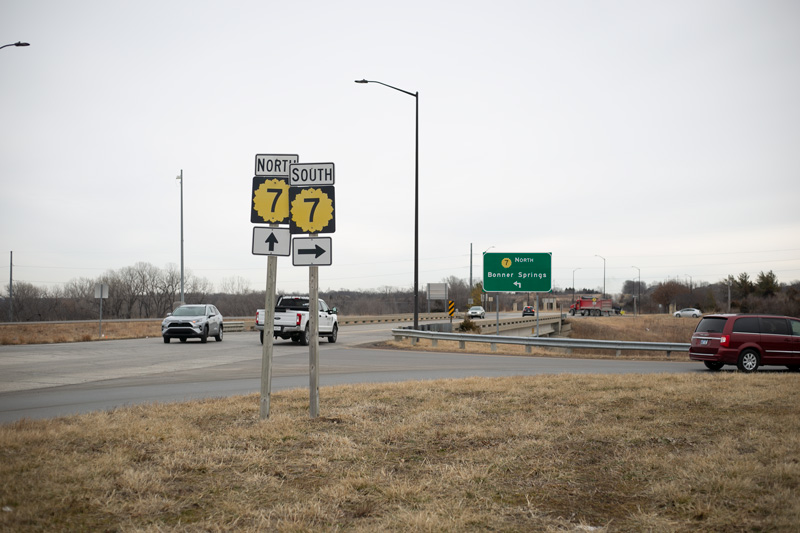 Lenexa is adding two traffic signals and improving exit ramps where Prairie Star Parkway meets K-7 Highway. Construction of the $2 million project is slated to begin in June with more than half the funding coming from the state. Photo credit Leah Wankum.

The Lenexa City Council last month unanimously agreed to adjust the budget for the K-7/Prairie Star Parkway interchange improvements, and also partner with the Kansas Department of Transportation on a funding agreement to help finance the project.

The roughly $2 million project includes installation of two traffic signals on the northbound and southbound ramp terminals from the state highway as well as the following:

The cost increase reflects a few adjustments to the project scope, including additional asphalt maintenance near the site.

Additionally, KDOT requested the realignment of the northbound exit ramp and is contributing $1.2 million to help pay for that, according to city documents.

The section of Prairie Star Parkway was already slated on the city’s schedule this year for a type or road maintenance called mill and overlay.

The city originally budgeted $840,000 for the project, which would have only covered costs to install the traffic signals. The new budget reflects the cost increase of more than $1.1 million.

Funding for the project now involves:

HNTB, a firm from Kansas City, Missouri, and consultant for the project, is finalizing design plans next month. Construction is slated to begin in June and be completed by the end of this year.