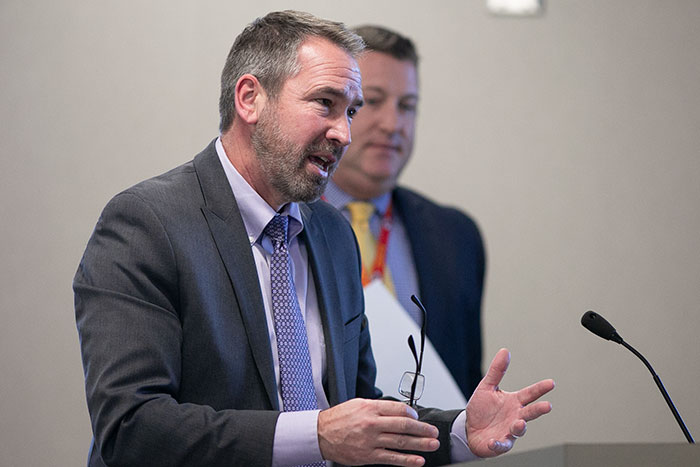 Joe Gilhaus will be the Shawnee Mission School District's next Deputy Superintendent, starting July 1. That role is currently filled by Michelle Hubbard, who will be moving into the top superintendent's role this summer. File photo.

The Shawnee Mission Board of Education has approved the appointment of Joe Gilhaus to be the district’s next Deputy Superintendent, effective July 1.

Gilhaus is currently SMSD’s Director of Secondary Services, overseeing middle and high schools in the district. He has worked in Shawnee Mission for the past 30 years, starting out as a teacher at Hocker Grove Middle School in 1991 and later serving as an administrator at Westridge Middle and SM South High School.

The district’s other Deputy Superintendent Rick Atha is set to retire in December.

The piece is a sculpture installed directly in front of city hall at 4600 W. 51st Street. “Damsel” lights up at night with red lights, according to a city tweet.

“Damsel” by Amie Jacobsen has been installed in front of City Hall. The City art committee recommended the purchase using Public Art Funding. The sculpture lights up at night with beautiful red lights. Drive by and check it out! #RPpride pic.twitter.com/B3GUZOp9jf

After an Arctic blast brought a wave of dangerously cold temperatures and snowy weather last month, Johnson County K-State Research and Extension is answering questions about how the cold spell could have an impact on plants and insects.

“It is too early to tell about our landscape shrubs and flowers,” said Dennis Patton, horticulture agent for the county extension office. “Damaged plants will be slow to emerge, or growth may come from below ground. It may be well into May until a damaged plant shows signs of life.”

Extension office staff recommend the following: If you scratch the branch and find the cambium layer is green and moist, the plant is alive. If it is dry and brown, the reason could depend on any number of factors, including the type of plant you are testing.

As to insects, Patton said insects probably survived the cold temperatures because they’re cold-blooded and can withstand extreme weather events.

“It is best to be patient and wait to see,” Patton added. “Nature will let us know if or how much damage was caused by the extreme winter temperatures.”