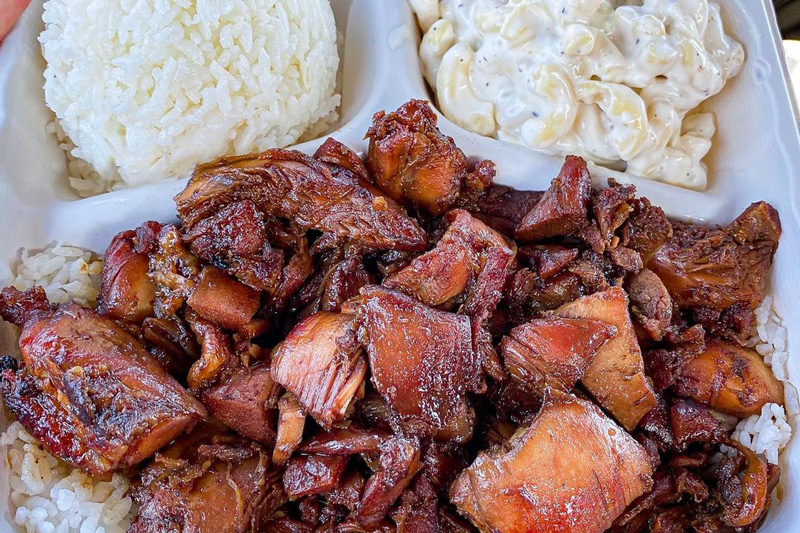 Hawaiian Bros is bringing a new location with drive-thru to Sonoma Plaza, a commercial site near 87th Street Parkway and I-435 in Lenexa. Above, an order of the restaurant's Huli Huli Chicken. Photo via Twitter.

Hawaiian Bros and Jersey Mike’s are coming soon to Sonoma Plaza in Lenexa.

Meanwhile, the 85-acre site at 87th Street Parkway and I-435 in Lenexa is nearing several milestones of completion.

Jersey Mike’s opens in a few weeks at 16165 W. 87th St. Parkway, in the same building as Big Biscuit (which opens in May). Hawaiian Bros will have a drive-thru in its location near Verizon on the corner of West 87th Street Parkway and Maurer Road. Hawaiian Bros says that franchise should open sometime this fall.

Also coming to the site is Charlie’s Car Wash, which will include a tunnel car wash and a vehicle interior cleaning unit, on the northwest corner of the site near the interstate.

Both Hawaiian Bros and Jersey Mike’s have been growing their footprints in the Kansas City metro area.

Hawaiian Bros is nearly finished with its Shawnee location and planning to open another restaurant in Overland Park. And Jersey Mike’s opened an Overland Park location last year.

“They’re all doing so well and they’re all exceeding expectations, even through the COVID crisis, which means that they will be able to make it long term,” Oddo said. “It means that there’s a lot of pent-up demand for their services.”

Oddo said they are also “negotiating with several other possible restaurants and service providers for the few remaining spaces.”

The only available commercial spaces left include a site between the future car wash and Hawaiian Bros, and a second site between McKeever’s Market and the future Bank of Omaha.

Some concerns about traffic, walkability

The Lenexa Planning Commission on March 1 approved a revised preliminary plan, despite concerns from some planning commissioners that the site attracts more vehicle traffic than pedestrians and cyclists.

Oddo pushed back on some of those comments, citing the mix of wide sidewalks, roundabouts and water features that can accommodate all modes of transportation.

“Our foremost concern was to have a community that was going to fill the needs of Lenexa, make it an economically sound community that’s walkable, bikeable and driveable, and easily have access to,” Oddo said.

Sonoma Hill with its 332 units on the southeast corner of the site was recently finished.

The second phase of apartments with 338 units, The Peak, is under construction just south of McKeever’s Market. Residents may move in as early as August.

Oddo Development has nixed plans for senior living at Sonoma, instead favoring plans for another apartment complex for the site just south of Red Door Grill.

The third phase of apartment construction, for The Residents at Sonoma with about 300 units, begins in 2023.

“I like to say it’s a monopoly for living, and I just love driving by and seeing everything being developed and built there,” Oddo said. “I think when it’s all developed and all the landscaping is in, this is going to be one of the finer communities in the Kansas City metro.”