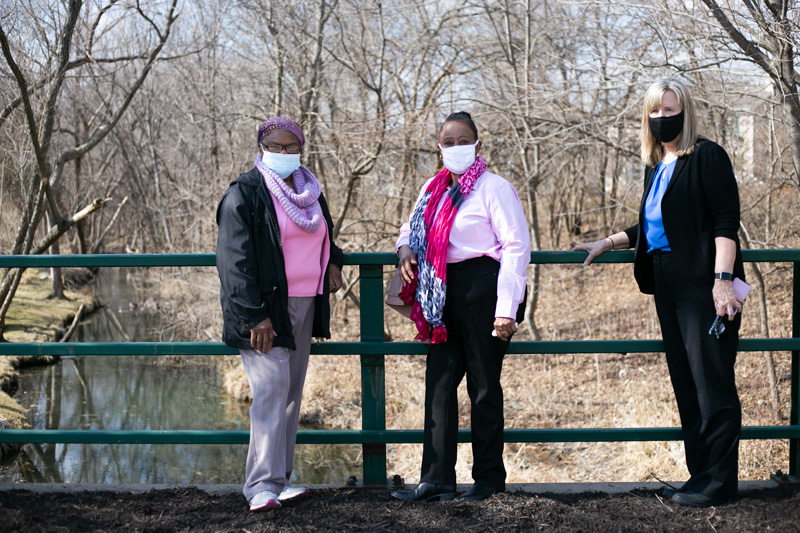 Wandra Minor (left) and Virginia Sewing (middle) with the Johnson County chapter of the NAACP, along with Johnson County Commissioner Becky Fast (right), are part of an informal group of local officials and activists working to change the name of Negro Creek. Here, the three stand on a bridge over the creek in Overland Park near Lowell Avenue between West 152nd Terrace and West 153rd Street. Photo credit Leah Wankum.

Warning: The following story contains references to an offensive racial slur and a recounting of an act of violence that some readers may find disturbing.

An unassuming little creek, unmarked and unremarkable, is about to teach Johnson County a hard lesson about history.

Negro Creek has no signs to proclaim itself. It runs 6.5 miles through a Leawood golf course and bends through several neighborhoods in southern Overland Park.

It’s not labeled on many maps and there’s no signage. But for some people who have heard of it, the creek’s name felt like a curiosity worth investigating, especially after last summer’s protests nationwide called for a broader reckoning with racism following a string of police killings of Black people.

There have been suppositions over the years about the name’s origins.

Perhaps it came from the Spanish word for “black,” owing to the color of the water which ran near the bygone Santa Fe Trail. Or maybe it was named for Black families who lived in nearby Oxford Township. Some believed, perhaps hopefully, that the name commemorated the creek as part of an Underground Railroad route.

But a pair of historians’ recent research has found the most plausible reality to be far grimmer: the creek likely takes its name from an unimaginable choice made by a freedom-seeking Black man fleeing his enslavers.

Now, a local group of civic leaders and social activists is beginning the complicated process of renaming the creek, while taking steps to make sure this painful part of Johnson County’s past is not forgotten.

But following the killing of George Floyd in Minneapolis and the demonstrations that followed in cities across the country including in Johnson County, an informal group made up of local officials and racial justice advocates began looking more closely at the creek’s name and origins.

They began trying to collect historical information about the creek, but weeks of research yielded no well-supported evidence for the origin of the name. So, the group turned to Dr. Diane Mutti Burke, chair of the University of Missouri-Kansas City history department, to try to find some answers.

Assisted by doctoral candidate Deborah Keating, Burke explored many theories, but eventually highlighted a story from the Western Progress, a newspaper published in Spring Hill in the late 1800s.

Along with a map from 1856, the 1879 Western Progress item appears to be the first known reference to the creek’s name. In a short, jocular tone, the Western Progress story tells of a pursued slave who chose death over being recaptured.

In the item, the creek’s name uses an offensive racial slur, which we have chosen not to publish.

“Stanley is located at the head of ‘N—- Creek.’ Some of the curious may want to know why the stream is called by that name. As the poet would say, ‘thereby hangs a tale.’ In 185–, James Chiles of Jackson County, Missouri, had a negro man to ‘run off,’ they followed and surrounded him on the stream running to Stanley to Blue, when finding they would capture him he drew a knife and cut his throat from ear to ear. From that day to this it has been known as ‘N— Creek.’ Of course the proper name is negro, but we being Democrats down here, (for short) spell it with two ‘g’s.’”

Burke and Keating prepared a 21-page report and presented their conclusions to the group in February.

Hearing the story was “a big shock, an eye opener,” said Emily Jeffrey, who is part of the group and founder of the Johnson County Task Force for Racial Equality.

“I think we all suspected there might be some violence tied toward the name, but just hearing all of this, I think everyone was taken aback. Yes, we know that those things have happened in our history but hearing the story is a lot to take in,” she said.

Of course, one newspaper clipping telling an old story doesn’t stand as definitive proof, but the historian Burke found it plausible because of the amount of other evidence that supports it.

During the time in question, the Chileses were well known on the Missouri side of the border for being enthusiastically pro-slavery. Col. James Chiles was a politician who before the Civil War had been a county commissioner, representative and senator in the Missouri Legislature. At one time, he was speaker of the Missouri House of Representatives.

His son, James J., was known as “Jim Crow” Chiles, possibly for his skill at a dance called the “Jim Crow Set.” (This was in a time before the infamous Jim Crow laws in the South, but “Jim Crow” was a frequently portrayed stock character in 19th Century minstrel shows.)

The younger Chiles was a Confederate Bushwhacker who served with William Quantrill, who led an infamous raid against the Free State town of Lawrence, Kan., in 1863.

Many of the Chileses’ extended family lived in southwestern Jackson County, in proximity to what became known as Negro Creek.

For the name to appear on an 1856 map, the story would have had to occur sometime before that to gain common usage, Burke’s research suggests.

That’s plausible because the younger Chiles lived in the area during that time and owned slaves. In addition, Kansas had a reputation even before opening up to white settlement as a place slaves from Missouri would run to try to gain their freedom.

There are still plenty of unknowns.

For instance, it’s possible the enslaved man did not commit suicide but was murdered. Burke points out, however, that is less likely, since he would have been considered property with a financial value.

The creek as an Underground Railroad route is also possible, but doesn’t hold up as well because of a lack of supporting evidence.

Underground Railroad routes are notoriously hard to document because of the secrecy around them, she said. Burke and Keating said they could find no documentary evidence connecting the creek to the railroad.

Given the date, historical context and the fact that the creek was often referred to by the racial slur, the pair concluded the name wasn’t meant to be laudatory.

“It is highly unlikely that the name was given in honor or tribute to Black residents of Johnson County or because it was a known route on the Underground Railroad,” the report says. “Instead, it is more likely, although it yet has been proven, that the roots of the name were in the death of a Black man along the creek.”

So now the creek must be renamed. That was the conclusion of Burke and the rest of the group that had set out to discover the creek’s history.

The name the group members have most often mentioned as a replacement is “Freedom Creek.” But it’s still too early to say because the group must first get community feedback.

Renaming the creek will be a complicated process governed by the U.S. Geological Survey and is likely to involve multiple community outreach sessions. It could take a half-year or more.

But that could be the easy part.

The historians and group members agree that much more than renaming has to happen. The story needs to be preserved somehow, perhaps through signs and markers along the creek.

The last thing the group says it wants to do is let the story behind the creek’s name be forgotten once the name is changed.

Wandra Minor, a member of the NAACP who is on the committee, said Johnson County needs to know about its history, even the painful parts.

Without any signs and with few mentions on maps, most people today are unlikely to know anything about the creek’s history. Without more education, the story could fade away, she said.

“I think something good can come of it,” Minor said. “History is what it is – history. You can’t bury it and hide it. I am glad they’re bringing it to the forefront of the community to make them aware of it.”

Patrick Wotruba leads The Miller Dream. They have continued pushing for a name change. Wotruba said his group tried to research it but had not found the story highlighted by the historians.

Jeffrey said she’d never heard the story either, until the committee meeting. She said it’s important Johnson Countians not allow this history to be glossed over.

“People need to be aware of our history so we don’t repeat things, so we learn from them,” she said. “If we just change the name to something happy or positive and don’t educate the community, it would be a disservice to all.”

Fast, said she hopes the process will open a larger conversation about the county’s history, diversity and inclusion.

“You can’t run away from the past but you can use it to know better who we are now,” she said.

Renaming a geographical feature is a process governed by the U.S. Geological Survey, and it comes with some hoops.

The federal Board of Geographic Names asks for petitioners to solicit local input and support on a name change. Even with that, the process still can take from six to eight months.

Submissions are done quarterly and from there, there are waiting periods for notification and comment.

In the meantime, the committee is only beginning to figure out its own timeline for getting community input and filing the papers.

“This is definitely momentum in the right direction,” Fast said.

You can read the full “Report on the History and the Origins of the Name of Negro Creek, Johnson County, Kansas” compiled by Diane Mutti Burke and Deborah Keating below.