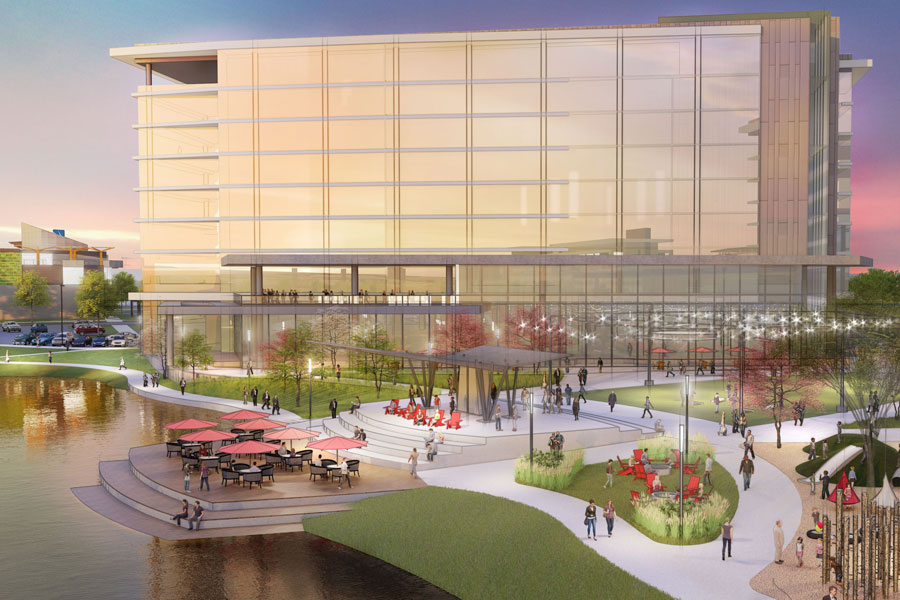 A Wichita-based developer wants to convert the 200-acre site near 119th and Nall into a vast multi-use tract that includes retail, housing and office space. The Overland Park Planning Commission on Monday unanimously approved rezoning the site but concerns about too much parking remain. Above, a rendering of part of the proposed project, now branded Aspiria. Image courtesy Occidental Management.

Overland Park planning commissioners have unanimously approved a rezoning request to develop the former Sprint campus into a vast mixed-used space, but they said more work still needs to be done by developers on several fronts, including excess parking, access points and coordination with the Jewish Community Center, which it surrounds.

The rezoning to mixed-use would allow Occidental Management of Wichita to move forward with plans to redevelop the 207-acre site on the northwest corner of 119th Street and Nall Avenue. Developers have named the project Aspiria and propose an array of office and retail spaces, along with multi-family residences and hotels.

The area was developed 30 years ago with Sprint as the single user, and about 60 acres of it remains undeveloped. Occidental plans to revamp the tract into a more publicly welcoming space that will include outdoor gathering spaces, hiking and biking trails and ponds.

Attorney Greg Musil, who spoke for the developer, called it “one of the largest and most important in the history of Overland Park,” and a “once-in-a-lifetime unique opportunity in Overland Park to create something modern and new on undeveloped 60 acres in the heart of Overland Park.”

At a previous hearing last month, some commissioners expressed concern about the removal of trees that were originally part of a design that shielded Sprint from view of the surrounding area. On Monday commissioners said they were reassured by the fact that the developer has since removed some of the buildings and surface parking from the plan, adding more than 4 acres of green space.

Some older trees will have to be removed, but the developer is working with the city’s forester to plant new ones so that there will eventually be more trees than the city standards call for, Musil said.

Commissioner Michael Flanagan said removal of some trees would be unfortunate but necessary to create the open space to draw people in.

“If we didn’t get rid of some of the old stuff we’d be up to our backsides in pyramids,” he said. “They’re beautiful trees but they hide the whole campus and that’s what we don’t want.”

But there still remain issues to be worked out on the excess parking spaces and access points, particularly as they affect the Jewish Community Center.

Scott Slabotsky, the only speaker at Monday’s public hearing, spoke for the community center, saying members still don’t have enough information on the traffic flow to give their okay.

The development also has far more parking spaces than would be considered optimal by the city planners for a mixed-use development that emphasizes walking, and that is one of the issues still to be worked out.

Part of the problem is that the exterior border is lined with several parking structures that were built for Sprint workers who would be spending the day in their offices. Those garages are not necessarily well placed for the different mix of uses, some commissioners said.

The parking and other issues bothered Commissioner Kip Strauss enough that he proposed another continuance to work things out.

“We have 42% excess parking. That doesn’t make sense in a mixed use development. Can you imagine downtown having 42% more parking than is needed?” he asked.

Parking is far from the proposed activity areas, she noted.

“It doesn’t feel as integrated as I would have hoped it does,” she said.

But the majority voted down delaying the project further with some saying they support the rezoning and would look for more tweaks on the other issues in the final development plans.

“This is just a great development, and I want to see it move forward,” said Commissioner Tom Robinette.

The item will now move on to the full city council.