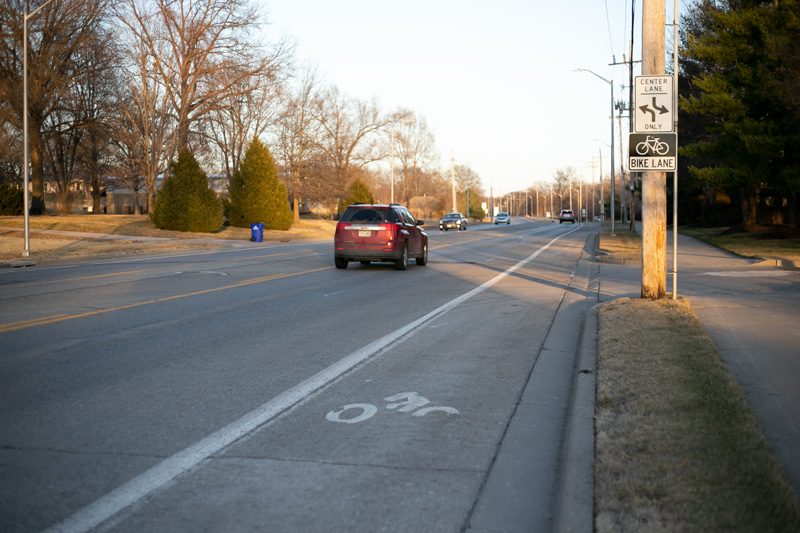 Lenexa is kicking off Phase 1 of its Complete Streets program. Some of the first projects include bike lanes on part of 79th Street and Share the Road signage for bike routes on Prairie Star Parkway and Lackman Road. Bike lanes will look similar to this one along a section of 75th Street in Shawnee.

Lenexa is making progress on its Complete Streets program to make the city more walkable and bikeable. Up next: bike lanes for some roads.

In a presentation to the Lenexa City Council last week, Steve Schooley, transportation manager for the city, said work is now beginning on the first phase of construction for Complete Streets.

As part of Phase 1, Lenexa is adding several Share the Road signs, pavement markings and bike route signs throughout the city.

The city council on March 2 unanimously agreed to hire K & G Striping for about $113,000 to handle bike lanes and signage for the city as part of Phase 1 of the Complete Streets program.

It’s been about a year since the Lenexa City Council accepted the Complete Streets study to review connectivity of the city. Since then, city leaders voted to require wider sidewalks and more trail connections as part of development projects.

Now, work begins in the spring to mark 5 miles of bike lanes and install Share the Road signage along 16 miles of roads. The project includes:

The city is also developing a “bicycle boulevard” that makes a giant loop around the city (seen in the above map.)

Once completed, the bike route is intended to serve as a connector for cyclists interested in touring around Lenexa. The project will have a combination of signage and pavement markings for motorists alerting them to cyclists, as well as signage for the bike route.

The “bicycle boulevard” has a missing link on part of 87th Street. The city is planning to build a mixed-use trail on 87th from Bourgade to Allman to finish the loop.

Here are some updates for other projects coming up:

A stretch of 99th Street just south of Mize Lake will gain some bike lanes. Plus, a new mixed-use trail is coming to a stretch of Clare Road nearby.

The project also includes enhanced pedestrian crosswalk markings as well as a new traffic signal with crossings at 99th and Canyon Creek.

E-Bike program is back

Lenexa has restarted its E-Bike program this spring.

The program has 25 rental bikes, and the city plans to get six more, to be stationed around the city for residents’ use.

Meanwhile, several connectivity projects in Lenexa that have “Complete Streets” elements to them are underway. Below is a map providing an overview of projects in the city. Projects marked in red are up next for construction.

All items on the map that are marked in blue and yellow are getting underway and include the following:

Lenexa spends about $300,000 per year to repair dilapidated sidewalks and connect missing links.

Councilmembers said they wanted to make sure the city is on the right track and communicating with residents on education for safe traveling with bikes.

“I think we’re taking a measured cost and thoughtful approach to this, and appreciate that,” said Mayor Mike Boehm.

Duane Benne, a Lenexa cyclist, shared his support for the project and hopes to increase accessibility for bicycles.

“I think this all looks great,” Benne said. “One thing that would be nice in the future to think about is good bike access to Shawnee Mission Park. It’s very helpful that there’s now a signal at the top of the hill there, but it’s still a little sketchy for bikes trying to get in there. But otherwise, it’s encouraging to see what’s going on here.”

The city plans to evaluate progress on Complete Streets and take feedback from residents on future projects.