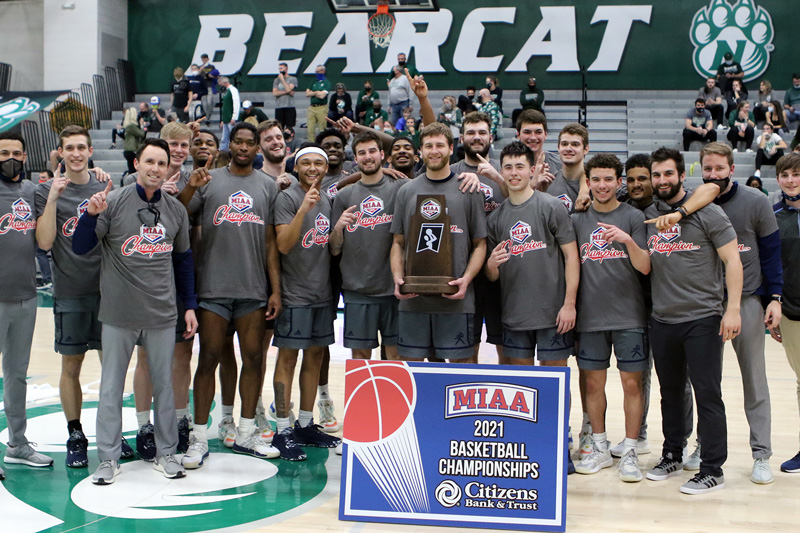 Washburn took home the MIAA Tournament title last weekend, thanks to a 57-foot three-pointer shot by Tyler Geiman, a Blue Valley High grad. Pictured are the MIAA champions, with Geiman standing just to the right of the trophy. Photo via Twitter.

Blue Valley grad Tyler Geiman made a 57-foot three-point shot right as the buzzer sounded last weekend to give Washburn its first MIAA Tournament title since 2012.

St. Joseph Catholic Church in Shawnee and the Community Blood Center are hosting a blood drive from 1 to 7 p.m. Monday, March 22, at the Knights of Columbus Hall, 11221 Johnson Drive.

Donors can make an appointment online at savealifenow.org and use Sponsor Code stjosephcatholic, or by contacting Virginia Wiedel, parish blood drive coordinator, at (913) 268-3874 or vwiedel63@gmail.com.

The Johnson County Parks and Recreation District will host a family fun bingo night at the Roeland Park Community Center on March 12.

Local activist and 2017 SM North graduate Jae Moyer has filed their candidacy for the Johnson County Community College Board of Trustees.

A lifelong Johnson County resident and student at Johnson County Community College, Moyer plans to focus the election campaign on the values of “equality, education and opportunity,” according to a press release of the announcement.

“I truly believe that one of the most important things that our society benefits from is the education we all receive,” Moyer said in a statement. “Like with any candidate, I’m running because I want to represent Johnson Countians to make this institution even stronger than it is currently, and of course, I have some broad ideas on how we can make this happen.”

Moyer’s platform includes diversity, equity and inclusion initiatives such as making Juneteenth a paid holiday, as well as lowering financial hardship for students attending school by either lowering the cost of tuition or by increasing access to scholarships.

Moyer is studying political science at JCCC and has been speaking on behalf of Equality Kansas in favor of non-discrimination ordinances in Johnson County cities. The ordinances are designed to protect LGBTQ residents from losing their jobs or homes on the basis of sexual orientation or gender identity. Moyer has also made frequent appearances at marches and rallies for racial equality.