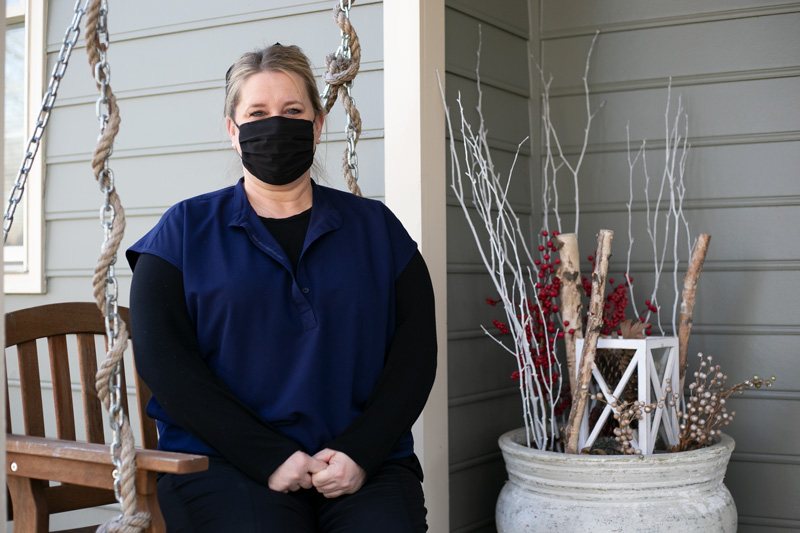 Each experience gave her insight into the complications of the disease caused by COVID-19, the national response to the coronavirus pandemic, and the willpower of nurses and doctors against incredible odds. She also made lifelong friends during her deployments. Read more about her journey in the Hospice Foundation of America’s recent publication.

An Overland Park native and graduate from Bishop Miege, Kotar earned her Master’s of Science in Nursing from Metropolitan Community College. Before her current role teaching pediatrics at her alma mater, she previously worked at a few local hospitals, including Children’s Mercy.

In her spare time, she enjoys the outdoors, especially visiting Seagrove Beach near Destin, Florida. She also likes canoeing, knitting, organizing and yardwork, and restoring old things. She lives in Prairie Village with her three children, Abby, Sophia and Owen, and their dog and three cats.

Just going to New York in general was scary. It was the “ground zero” for everything. Krucial Staffing, it seemed like they were deploying 500 nurses for weeks on end. I had to make sure that my kids were OK with it, because I had to commit to stay for 21 days. They paid for my airfare and my hotel, which was in Times Square — it was cool, except it was closed. It was weird.

This was my first time going to New York, and my kids were like you’re not going to get the full New York feel ‘cause everything is closed. Literally.

We had the whole of Times Square and the hotel to ourselves for the most part, but it’s surreal to look back and think about it because it was just so crazy. I got to New York and just really had no idea what to expect. They were like meet downstairs at 5:30, and there were just lines of nurses. We were all like how are we supposed to social distance, there’s like a thousand of us.

I went to Jacobi Hospital, which is in the Bronx, and it was about a 40-minute bus ride to and from the hospital every day.

COVID was… it was like a bomb went off. It was like being in a third-world country. Really disorganized. A lot of shuffling of patients. The company I was with was very organized, but the hospitals were just little to no staff.

People had quit because they were, in a matter of weeks, just burned out. They were completely inundated with people that were coming in and dying. They couldn’t keep up. It was very surreal.

I realized very quickly that you bond with those healthcare workers almost instantly. You’ve got a common background, you come from common places, because you work in healthcare so you can relate to people quickly. I was very fortunate that the nurses that I was on the bus with, like we all commiserated together. That really got me through every single day.

But I didn’t get a patient on a ventilator. The unit I was on, they were really pretty stable. But the first week I think I started out with seven patients, which I’m used to taking three to four pediatric patients, for adults maybe four to five. You can’t even begin to give good care with that much. It’s physically impossible.

The people in New York were, at first I was like whoa, they are all just yelling all the time, everyone’s just yelling at everybody. By the time I was done, I was yelling too, like I was a New Yorker, I just adapted to what I had to adapt to.

But it was such a loving yelling, I can’t even describe, they were really at first I was like oh I’m from the Midwest, I am not used to this stuff, but they were some of the best people. I’ll always remember those people that I worked with.

Corpus Christi. When I went down there, I thought that it would be better than New York, that they would have it together, that we’ve come so far. And I was wrong.

It was a lot worse in Corpus Christi because they didn’t shut much down and they didn’t have much of a mask mandate. I kept thinking, did you guys not get the memo that there’s a global pandemic? It was really crazy.

The patients were so much sicker. The ones in New York were on just a couple liters of oxygen, maybe a non-rebreather which is just pretty stable. I did not lose anyone in New York. In Corpus Christi, I think I lost half my patients, if not more.

That really did a number on me. That was hard because they were typically older patients, like 60s to 80s. A day in the life would be that they come in, they’re on 4 liters of oxygen, and four hours later, they need a Bi-PAP, which is like pressurized oxygen, it’s way more critical than the 4 liters. It was nothing for me to have two to three patients on a Bi-PAP.

These patients were going downhill very quickly. They would code so fast and you’d have to send them to the ICU. One day I had two patients, they both needed a Bi-PAP because their oxygen saturations were falling so low. But we only had one Bi-PAP machine. So I had to decide who out of these two gets the Bi-PAP.

Everybody was in the same position as me. There just wasn’t the resources. Other nurses, they were busy with their own patients. It was just a mess.

We put one on Bi-PAP and then I started coding the other one, I had to just bag him and do it manually. But there was only one AMBU bag on the floor, so if someone else needed it, too bad. We lost both of them.

I didn’t realize it was happening, but I think I came home with some serious depression. I hate to say PTSD because I don’t want to offend people that really have PTSD, but it really feels like that’s what it was. I came home and just felt so defeated. I didn’t feel like I helped. I didn’t change anyone’s life.

I know that’s not true — nurses go into hospice to gracefully lead people into the next life — but I’m not a hospice nurse. My job is to save people’s lives, and when you’re losing all of them, you feel like you’re really bad at your job.

I had to go to Amarillo because I had to prove to myself that I am a good nurse and that I can change lives. And honestly, I don’t think I was cured from this PTSD until I got home from Amarillo.

In Amarillo, things were calmer than they had been anywhere else. Amarillo was the nicest people, so kind there. The general public still didn’t get the mask thing at all, they weren’t very good about it. You would have thought by December they would have been, but they weren’t.

Amarillo was a little more organized. I had better training for the facility I worked in. I ended up getting put on a women’s health floor. So I had to wear a mask but I didn’t have to gown up like I had before.

The patients I took care of were not COVID patients. Every now and again we would have one. These patients, some of them had blood clot issues from COVID, COVID-residual things.

But the reason that I wasn’t taking care of COVID patients was because a lot of the nurses had left, so they were replacing staff.

I think having that time of normalcy helped, ‘cause [with] COVID, you can’t win, unfortunately. I think that’s what I finally realized. You’re not going to win against it. It’s going to pick and choose. We don’t know enough about it. There’s 40 year olds that are perfectly healthy that died from COVID. It doesn’t make any sense.

That’s what I’ve said all along, and I think that’s why wearing a mask until we know the vaccine is going to cover us and the variant — because now we have to worry about this variant — we all need to cautiously be optimistic, but definitely be cautious about it.

I said this in May, and I really thought I was being in dramatic, and a lot of people think I am a little dramatic throughout all of it — even though I’ve been through all of it — but I don’t think it’s over — I wish that was not my gut feeling, but it is — until scientists can do more research on why these people died and we know how to target exactly what it is, ‘cause it’s a very complicated virus.

To the general public, our day-to-day life, those people aren’t seeing what we’re seeing in a hospital. That makes it really frustrating because there are residuals to COVID. There are the long haulers who still aren’t better. I talked to my friend today who I was in Amarillo with, and she had COVID six months ago and she still can’t smell.

I have a lot of faith in the vaccine. I feel so much better since I’ve gotten it. I really hope that people will get it because until we reach herd immunity, I don’t think we’ll be out of the woods.